Videogame reviews suck. Reviewers blast through games to get the review out before release day only to have readers skim the details and go straight to the rating, ranking or score – which doesn’t matter anyway because most people have already decided whether or not to buy a game before they sat down to read about it. Unwinnable isn’t into that. Instead, we present the videogame Post Mortem, a breakdown of important aspects of a given game, well after we’ve finished it and digested the experience. If you don’t want to know plot details about the games covered in Post Mortem, don’t read on.

Bastion, from Supergiant Games, is the story of the Kid in the days after The Calamity. The Kid was a soldier at the city gates and he slept through the end of the world. He headed to The Bastion, the place to meet when the bad things go down. There, the Kid meets a stranger who tells him they must find their world’s cores to save The Bastion. The Bastion is the last hope for the world’s salvation.

An action roleplaying game with inventive level design and even more impressive sound design, Bastion is one of the finest downloadable games around. Yes, all of this has been covered in reviews before, but this is something that stretches throughout the entire game!

Bastion is very economical with its storytelling. From the get-go, a player essentially moves on instinct. The narrator’s deep and weathered voice follows your actions, not vice versa. If you don’t pick up that “something stringy” for your bow, he won’t tell you to go back and get it, but if you do, he’ll comment on how it will make your bow stronger and give you some insight into the world that’s passed. It’s that kind of economy of exposition and emphasis on gameplay that makes Bastion so much fun to – well – play!

The trick of Bastion’s story is that it is tied to the game’s playability. The story of the game is revealed through gameplay. There are a few traditional cut scenes, but most of the story happens while the Kid is on the go. While there is a lot of depth to the game, a player doesn’t necessarily have to learn the Kid’s backstory.

While playing the game, the fallen city of Caelondia emerges and disintegrates around the Kid. The levels fall and rise above the hand-painted backgrounds. Upon reaching the end of the Hanging Gardens, the Kid comes across a Survivor named Zulf. When in Prosper Bluff, he meets a singing girl named Zia. They return to the Bastion and stay with the Kid and Rucks, the Stranger.

Throughout the game, the Kid comes across relics of the world that’s gone away. Zulf, Zia and Rucks help the Kid identify the relics and in turn flesh out the story – at least until Zulf, the Survivor, betrays the Bastion.

The enemies are gas creatures and security systems gone awry. Squirts, Gasfellas and Scumbags are the main foes the Kid faces, at least until the betrayal; then the Kid must venture into the Wild Unknown.

As the Kid ventures deeper into the world, he faces off against the toughest of living creatures and must collect the shards Zulf stole from the Bastion. These enemies are tougher than the gas-based villains. There are plants that fire razor-sharp thorns, violent birds and more. The world continues building around the Kid as dystopic cityscapes give way to quarries and overgrown forests. Still, the Kid collects the shards until he discovers that Zurf isn’t the only survivor. His people, the Ura, survived too.

The Ura were the enemies of the Caels and now they want to stop their enemy and end the war between them. The Kid battles on, takes the shards and rebuilds the Bastion until he sees the Ura strike Zulf down for all the trouble he’s caused them since the Calamity.

A Link To The Past

Growing up with games like The Legend of Zelda, Castlevania II and later Chrono Trigger, I grew to love the action RPG as a genre.  The Kid, like Link, is a stand-in for the player. Sure, you can learn his backstory if you smoke a pipe, but the makers of Bastion never forgot they were making a game. There are similarities to those classics, but the storytelling has evolved.

There’s a lot of depth to the game, but there is so much more tucked away in little corners of the game. The contextual narration combined with the world building itself before The Kid’s eyes provides a unique storytelling experience one can only encounter in videogames. At its heart, Bastion is an action RPG/dungeon crawl, but it is one of the most fun games I’ve played in ages.

What strikes me most about Bastion is the sheer amount of choice a player has. When playing the game, a player has many options when it comes to weapon and potion combination. The player can carry two weapons and one special skill. Potions are based on what level you are in the game. What got me playing the second time around were the weapon upgrades and the secrets I didn’t recover the first time around. The biggest choice, however, is what to do with Zulf after the Ura try to dispatch him.

The End or the Beginning

The Kid can choose to save Zulf or leave him to die. Either choice significantly affects the player’s last stretch to the end. If the kid leaves Zulf, the player battles through the whole of the Ura remnant in an effort to reach the Bastion with the last shard. It was a nerve-wracking battle until I realized that I couldn’t really die about ¾ of the way through. However, if you choose to drop your weapon and carry Zulf on your back, the Ura stand in astonishment and let you walk to the skyway and make your way to the Bastion. 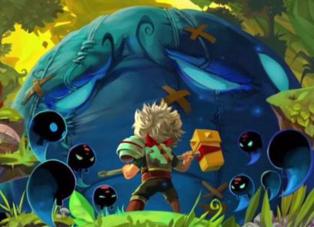 I played so I got both endings and I have to say that saving Zulf and escaping the world with Rucks and Zia is by far the most rewarding ending. Both endings, however, give players the option to play again, but with all weapons and potions intact.

It’s that kind of economy of exposition and emphasis on gameplay that makes Bastion so much fun to – well – play!

Bastion has immense replay value thanks to the “New Game Plus” mode.  The purpose of Bastion is to play it. Assemble the cores, assemble the shards and in any which way you choose. I am now on a third game where I’m trying to be cleverer with the potions. Werewhiskey and its 33% saving effect is proving quite helpful while I battle off the Gasfellas.

That is the beauty of Bastion. It’s a relatively short game, but with the amount of weapons and potions available, players can play through again and again with different combinations and find a new challenge within the crumbling city walls.

Having Your Coke (and Snorting It, Too!) – Saints Row the Third Reviewed
Previous Post