One of my favorite comic series of all time was Midnight Nation. Between J. Michael Straczynski’s epic story and Gary Frank’s impressive art, I was hooked from beginning to end. So now that Straczynski is returning to Image, I have nothing but high expectations for Ten Grand.

And this may be why I was a little disappointed. 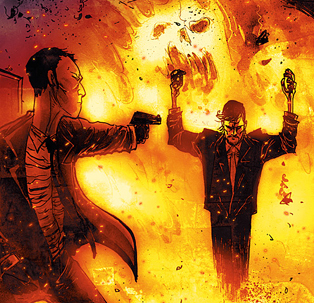 Ten Grand tells the story of Joe Fitzgerald, a grizzled hit man with a broken heart and a connection to the occult and necromancy. The thing that gets the plot rolling is the return of an old villain whom Joe knows is dead, plus a promise of redemption from an ethereal presence in Joe’s life.

But as to why? We’re not sure. His history with the villain is barely given, and while we see some moments between him and his dead wife, they’re a bit too clichéd to have much of an impact. I mean, I’m sure the guy loved his wife, but why is he so desperate to see her again? Granted, the comic is only in its first issue, so these ideas may solidify in the future, but it’s a lot to ask readers to trust you rather than giving them a tangible reason to return.

One thing that is immediately noticeable is Ben Templesmith’s art. Known for his work in Steve Niles’ 30 Days of Night, Templesmith uses his gritty style with aplomb, crafting mood-heavy panels that evoke emotions better than the words. Straczynski’s writing hurts Templesmith’s work a little, particularly when the comic bounces, unevenly, between different points in time, but Templesmith has an ability to shade the art in a way that conveys the change in setting. Ten Grand is better for it.

The comic has a smattering of cool things – like Joe’s angel alphabet keyboard – but these are passing ideas rather than sticking points. The originality of the series is present, but not fully formed, and so JMS has a lot of work ahead of him if he wants to keep readers on board.

Hopefully, issue #2 goes far in addressing – and fixing – these problems. 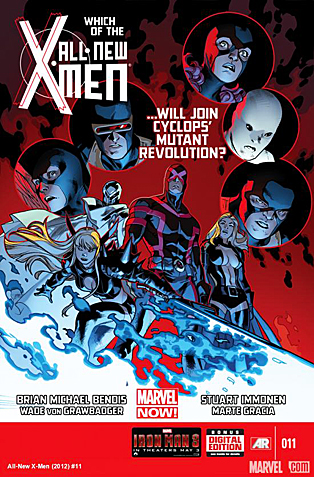 So what happens when two groups of X-Men, from different time periods, meet up with each other for a classic showdown?

In his wordiest issue of All New X-Men to date, Bendis explores the ramifications of the modern day dysfunctional X-Men encountering their young, naïve selves. The result is a comic that is loaded with showdowns, mental battles and a defection or two. The final page, much like the previous issue, teases another meeting of the past and present, but I couldn’t help the excitement I felt at the prospect of young Scott Summers meeting his brother.

Amidst all the chaos of the issue, Stuart Immonen is the one constant. Every visual is rendered with sharp clarity and even in a sea of faces, no two characters look alike. Wade Von Grawbadger’s inks are also on display as he uses incredible precision in his finishes. Coupled with Marte Gracia’s colors, the book is a visual treat.

And given the amount of dialogue that occurs, I would be remiss in not recognizing the stellar work of Cory Petit. At no point was the thread of the conversation difficult to follow, nor did it hinder the movement of the eye across the page. Lettering a comic must be difficult, but lettering a comic like this – with excessive words- is a feat. Petit deserves as much of the credit as anyone else for making this comic as coherent as it is.

I love All New X-Men, and each issue has been worth the price of admission. Bendis is clearly enjoying himself, and the comic is solid because of the passion with which he writes the characters. I have no idea what will happen, or how long Bendis can keep this story going, but based on what I’ve seen so far, I’m sure the results will be spectacular. 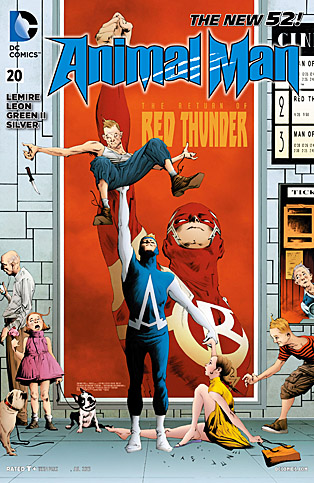 Bannen’s Book of the Week: Sometimes a book takes such a dramatic turn away from its usual methods that the result is surprising and stellar.

Animal Man was that book this week.

Rather than deal with the traditional aftereffects of Buddy losing his son, Lemire chooses to show Buddy’s remorse through one of his movie roles. The character of the movie, like Buddy, has a strong connection to his son, and we see his rise and fall as the movie, entitled Tights, eerily mirrors Buddy’s own life.

Beyond that, Lemire humanizes his hero by removing everything mystical about him. He’s not shown doing a single super-powered thing, and his reticence to accept his fame (in the film) only makes his current predicament so heartfelt. The character’s arc, though, is much more hopeful, so when the final moments are pieced together – between the movie and the real world – the emotion lands with incredible precision, giving a palpable ache to Buddy’s mourning.

The book also works because of John Paul Leon’s gritty, tonally-heavy artwork. In the spirit of David Aja, Leon employs heavy shadows and smooth inks, creating a comic that conveys its emotions without words even being present. This works particularly well in the dialogue-free panels, where the solidarity and sadness of the character pervades the page.

I’ve enjoyed Animal Man from its inception, but the book was always tied in with Scott Snyder’s Swamp Thing. Maybe now, freed from any major crossovers, Lemire will have the space to tell the story he always wanted. Writers know that superheroes are only interesting if their alter egos have interesting conflicts as well. Clearly, Lemire knows how to amp up the sadness, solidify the depth of his hero and offer new readers an in to his comic.

And if this issue is a harbinger of things to come, count me in.