At the bar tonight, I stared at my phone in disbelief. Clash of the Titans, it told me, hit theaters in 1981. That meant the world had been without a new Ray Harryhausen movie for over 30 years. Now that he is gone, this seemed – seems – a travesty. 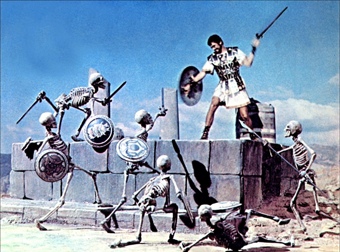 I think the true testament of Harryhausen’s genius is that his movies weren’t supposed to be mine. They belonged to my father. Even in my 20s, if Jason and the Argonauts was on TV, he’d make a point of telling me. And I would always watch. Thanks to Harryhausen, there is some universal connection between little boys and monsters (and dinosaurs). His skeletons and flying saucers and creatures of the deep came from a time decades before I existed, but they belonged to me, too.

So here’s to Ray Harryhausen: monsters and movies will never be the same without him.

Ray’s Sinbad skeleton sword battle was the first glimpse I ever saw of his work. I was 9 and my house didn’t have cable yet, so on a daily basis I was subjected to only 12 local stations. After school, I would walk home, make something to eat, empty the dishwasher and watch some TV. I also didn’t have any gaming console – my parents didn’t allow them. Bummer.

One day a local channel was airing The 7th Voyage of Sinbad and I caught it at the perfect moment. I was transfixed by the TV – I had never seen anything like it. Of course, I knew it was fake, but I didn’t know how it could be – I couldn’t see any strings! I thought it was the coolest sword fight ever. That Halloween, my friend and I dressed as skeletons and staged sword fights on unsuspecting neighbors’ front lawns. Needless to say, it was pretty badass. Rest in peace, brother.

Call me old-fashioned, but it doesn’t seem to matter how good CGI gets, it seems incapable of attaining the same level of “magic” that stop-motion animation has achieved at the hands of Ray Harryhausen. 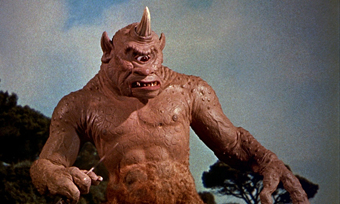 My big one was Clash of the Titans. Don’t get me wrong, I loved Jason‘s Hydra fight and the beloved skeleton battle. I watched in awe as Sinbad lured the fearsome Cyclops to its doom. Even the creature from It Came From Beneath the Sea rattled my cage despite watching it during a Power Rangers-fueled childhood.

But Clash of the Titans was it. Watching Perseus ride the graceful Pegasus across the Greek skies while Laurence Rosenthal’s awesome theme played triumphantly in the background, well, it made me feel powerful. It made me want to be brave and heroic and achieve everything I was destined to achieve (whatever that is). Clash of the Titans is of course the sum of its parts, but I love Ray Harryhausen’s bits the most.

Thank you for the Pegasus, Ray. You won’t be forgotten.

Harryhausen is primarily responsible for my foray into model making as a kid. I was mostly influenced by the Sinbad movies and, by the time Clash of the Titans came out, I was already tackling models of mythic proportions. I probably owe some of my love of skeletons to Harryhausen after seeing them come to life in a battle with Jason and his Argonauts. Here’s to the man that cemented stop-motion animation in film and brought life to a lump of clay.

Like most of my cohorts here at Team Unwinnable, my most vivid memory of Ray Harryhausen’s work is that of Medusa in Clash of the Titans. Over the years, I saw Jason and the Argonauts, The Beast from 20,000 Fathoms and many more of Harryhausen’s movies. The man’s work kindled my love of monsters. However, I’d always seen his work on the TV screen and not in the format he’d originally intended – the cinema.

Two years ago, I went to the Horrorthon at the Lafayette Theatre. The Lafayette is a gorgeous old movie palace. Every year, around Halloween, they have a monster movie marathon over the weekend. In 2011, one of the films on the bill was Harryhaussen’s Mysterious Island. It was a hoot! From the scuffle with the largest crab in movie history to the giant bee assault to the underwater battle with an overgrown cephalopod, Mysterious Island was an absolute joy to see on the big screen.

Ray Harryhausen’s breakthroughs and contributions to horror and science fiction films cannot be overstated. Like the crabs, bees and phorusrhacos that populated the Mysterious Island, he was a giant. All of us monster fans are forever indebted to him and happily live in his shadow. Rest in piece, good sir. 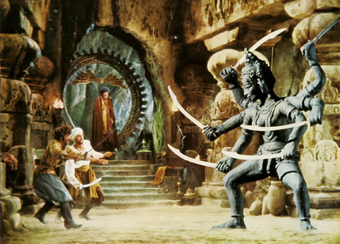 Nothing is more amazing and terrifying to a child than monsters made real. Centaurs, skeletons, dinosaurs and other large beasts, not to mention UFOs and other creatures of science fiction and mythology – Ray Harryhausen made that happen. The first movies that ever made an impression on me at a young age watching cable TV and renting movies from the library were Jason and the Argonauts, The 7th Voyage of Sinbad, and of course Clash of the Titans.

In some ways, I feel like my apprehension towards CGI is because of Mr. Harryhausen’s contributions, because the special effects and stop-motion animation that he was responsible for made every fantastic creature that much more real. Because it was made from carefully crafted sculptures and models initially, it essentially was real. Every child and adult owes themselves the pleasure of watching at least one movie that this genius was involved in, because decades later they are still a thing of wonder. His legacy will live on for generations to come, and most horror, science fiction, and fantasy films to this day still borrow heavily from his influence.

Three Southern California nerds are responsible for the shape of our shared dreams and our nightmares come to life. Forrest J. Ackerman was science fiction’s greatest fan – the kind that did more than collect and worship, he spun his love for the genre out to the world with an enthusiasm that was catching. Ray Bradbury, the youngest of the three, wrote tales fantastic and macabre that transcended pulp and challenged humanity to remember that the heart was as valuable an organ as the mind. Today the last of this trio of pals, allies and fans leaves us.

Ray Harryhausen, the pioneering stop-motion animator and special effects master, brought a menagerie of creatures and monsters to life. Arthur C. Clarke once said “any sufficiently advanced technology is indistinguishable from magic.” But it wasn’t just tech that made his army of hollow-eyed skeletons and winged harpies so fearsome and so real. Harryhausen worked a powerful magic because his imagination was as well honed as his craft – from it spilled myriad beasts, some from nature and some from legend. Mr. Harryhausen was unprejudiced when birthing his fabulous monsters. He wielded both science and magic and together he made both sing. Now his song, like the song of his estimable friends, has been silenced. But countless generations will hear those echoes reverberate – and you can damn well bet they’ll sound like the roar of some terrible beast.

Clash of the Titans, Forrest J. Ackerman, It Came From Beneath the Sea, Jason and the Argonauts, Mysterious Island, Ray Bradbury, Ray Harryhausen, stop motion animation, The 7th Voyage of Sinbad, The Valley of Gwangi