There comes a time when you have to decide what kind of middle-aged person you want to be. Somehow I decided that long hair, a beard and a penchant for black metal would be a good look going into my forties. Many cooler, younger folks may disagree. But they’ll have their own bridge to cross soon enough. This is about me and mine.

I was crazy about the stuff in high school – had a Metallica shirt for every day of the week.

I have a decent recollection of the moment I started trying to do something about my impending aged-ness. We’d just moved to Minneapolis. I was in my late thirties and struggling to make a go of freelance writing. There was a job opening for the calendar editor position at the local monthly magazine, so I bought some sensible shoes and a closet full of khakis and gave the 9-to-5 another shot. I quit after a week. My excuse at the time was that the editors made my shit worse rather than better, but I can now admit that I was terrified of falling into a milquetoast rut.

Luckily an offer from The A.V. Club came soon after and I was able to remain the unkempt freelancer I wanted to be. But even so I realized that my means of making a living wasn’t the only factor threatening to make me boring. I noticed, especially in Minneapolis, a sort of blandification that happens to men my age. Blame NPR or Lands End or whomever you like. But the net result is a sort of old, white guy homogenization that I was terrified of succumbing to. That dude in the Viagra commercial driving his SS Camaro into the sunset? I don’t want to be that dude. Though I do, somewhat shamefully, covet old Chevys.

Somehow metal feels more right to me. I was crazy about the stuff in high school – had a Metallica shirt for every day of the week. But when alternative took hold I turned my back on the music that had defined my teenage years and moved on. It was probably for the best. I’m not sure that remaining a brooding headbanger would have been terribly good for my dating prospects in the late ’90s. But I also realize that the know-it-all attitude about music that I adopted in my 20s left me willfully ignorant to a lot of amazing stuff. Despite being from Florida I was almost completely ignorant to the explosion of death metal that happened in Tampa. I was too distracted by industrial music even though the paths of the two genres overlapped in bands like Ministry. 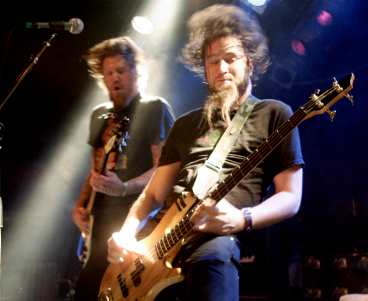 And the timing was perfect. Just as I neared my middle age, bands with blood, fire and steel in their hearts began to undo all the damage done by nu metalers. My gateway drug was the Japanese noise/doom outfit Boris. I fell in love with Pink, a record that melded a very familiar shoegaze-infused  post-rock with aggressive, amp-wrecked riffage. And from there the hard music came on like an avalanche. I rediscovered the groundbreaking doom of Melvins, finally connected to the proggy Southern sludge of Mastodon and came to love black metal’s all-encompassing noise by way of Wolves in the Throne Room. And from there, as is my wont when I’m falling in love with something new, I began to follow the threads back to their sources. That’s how I came to fall in love with older innovators like Weaking, Judas Priest (thanks, videogames) and Death.

It felt particularly gratifying to finally connect with death metal – to find bands that I dug (like Massacre!) and come to appreciate the oft-maligned cookie monster growl. Making those connections felt like righting old wrongs, repairing errors made in a misspent youth. Where some men try to relive their golden years by driving fast cars (I’m still contemplating an El Camino) and trying to make time with women half their age, I would rather make amends with the ghost of Chuck Schuldiner for not properly appreciating him while he was alive.

There’s much more to my newfound love of metal. I am, admittedly, succumbing to nostalgia. And I’m also glomming onto a younger generation. Now I am the old dude at the show. I’d often wondered what kind of weird old person shows up to rock shows. I am somewhat relieved to learn that I am that kind of person. Though a small part of my motivation might be desperate, I’m denying, or at the very least trying to own, my unavoidable oldness. And to many my methods might not seem all that graceful. But these black T-shirts and cacophonous bands don’t just remind me of my youth, they make me feel alive, where sensible slacks, snowblowers and talk radio truly and thoroughly make me want to die. Count me, for now, among the living.

Hedwig and the Angsty Witch