Two months ago, a glowy teaser trailer for Far Cry 3: Blood Dragon dropped and it felt like something I’ve already seen a million times before. (Know that those impressions are coming from someone born two years too late to actually experience the nostalgia being marketed here.)

Pop culture will never forget the ’80s. Cyclical waves of the excessive period come and go every few years, and right now we’re in the midst of a cynical and dark barrage of neo-’80s fluff that’s only going to lead to more stubborn remembering in the future.

The present day is scary. It’s not so rose-tinted.

I get it. I get that the pop culture from 30 years ago looks silly in retrospect. I get that it’s easy and fun to turn all of its lo-fi violence and tech-noir glamour into consciously silly video games, but it’s beginning to get ridiculous. Pop culture is silly no matter the decade, and this whole Blood Dragon production takes that notion to schizophrenic new heights.

As admittedly awesome as this may be, some unexpected profanity and gore spoil the retro Saturday-morning cartoon theme, and a deliberately 1996-flavored website adds chronological confusion into the mix. And what, exactly, does this have to do with Far Cry again? The game just now released, so I guess I’ll soon find out. 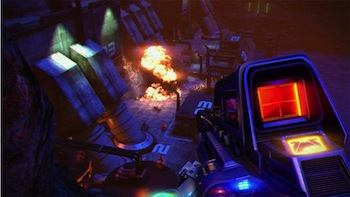 Throw a whole bunch of shameful memories into a blender, and see what comes out. That’s what Lady Gaga did in 2008. Her whole act is a Madonna tribute with the subtlety of a sledgehammer; it’s oddly refreshing but undoubtedly indebted to rose-colored memories of “True Blue”. At some point in 2010, Kavinsky synthed up a catchy neon-colored track to fit the pink brush typography of Drive. Soon afterwards, an entire movement of cheesy neo-’80s revivalists cropped up, thanks to hammy synth-pop acts like Perturbator and Mitch Murder. After Drive came the period piece Hotline Miami, and after a half-year of Hotline, Blood Dragon is arriving right on schedule.

It’s gotten to a point where I’m actually capable of feeling nostalgic for nostalgia. Ten years ago we were going through an eerily similar phase of ’80s nostalgia, centered on products like Grand Theft Auto: Vice City, I Love the ’80s, Donnie Darko and Napoleon Dynamite. In the spring of 2004, George Michael, Morrisey, Prince and The Cure all released throwback albums within weeks of each other. The market was oversaturated with dust, and that wasn’t even the beginning. The late ’90s didn’t waste time remembering the ’80s, either. The Wedding Singer romanticized the Reagan years about as much as American Psycho critically skewered them.

But this time, producers and their audiences have a whole lot less actual experience with the ’80s than the last. As always, nostalgia has less to do with actual history than it does with the hazy, disintegrated memories people have of their own history. My age group is now taking on the memories of the one that came before us, and we’re replacing our own collective personal histories with theirs. 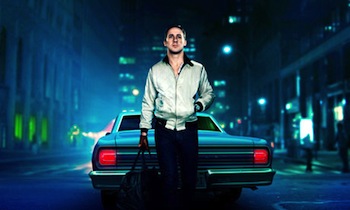 Nostalgia isn’t a personal thing anymore. Just look at how Blood Dragon evokes nostalgia as part of its branding: its state-of-the-art digital effects meticulously recreate the analog VHS tears and glowing interlaced pixels of yesteryear.  Like the cheesy neo-’80s techno artists who produce their tracks with digital production suites, it’s high-tech regression. On a tiny wallet-sized supercomputer built into a portable phone, I decoded digitized video files from radio waves floating around in the air to watch pop culture pretend that it was stuck in the ’80s.

Maybe we long for the period because those days marked the beginning of the end. After all, that was the age when video games and computers finally taught people how to lose entire days of their lives to a screen, when lofty moon landings and space-age aspirations took a back seat to the dystopic cyberpunk future that actually happened.

The present day is scary. It’s not so rose-tinted. Within the comfort of nostalgia you can take reality and melt the nasty little details out of the way, however rooted in nastiness they may be.

Maybe we want to go back to the 1980s because we are creatively stunted. The economy’s still in the toilet, the job market sucks, the new talent isn’t being hired and all of our technological advancements are converging into a humble, unassuming and unexciting little black brick of a phone. Once we get to a point where we can’t improve ourselves further, are we just stuck remembering the past?

And why do we want to be stuck in the ’80s in particular? Maybe it’s rooted in economics. After all, the financial brutality of the age of excess isn’t dissimilar to the crises we’re going through now. Does the subprime mortgage crisis remind us of the S&L crisis? Does the War on Terror remind us of the Cold War? Do Tea Partiers remind us of Reaganomics? 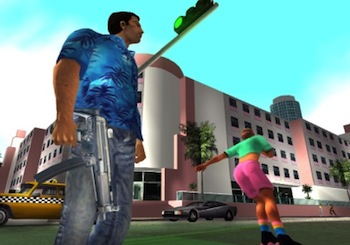 If nostalgia is rooted in eventful economic atmospheres, then perhaps the uneventful faux-peacetime between the Cold War and 9/11 was just too placid for our collective recollections. With so many analysts calling the 2000’s a “lost decade,” it’s not likely that we’ll be too eager to remember those years in the future, either.

I grew up thinking that marketers were always supposed to target 20-year-olds who had a newfound source of spending money and plenty of years of brand loyalty ahead of them. That puts me in an awfully weird position. I was 20 a long time ago, and never saw any grand wave of ’90s nostalgia sweep in once 2010 hit. But there’s an easy explanation why: today’s 20-year-olds don’t have any money to spend.

So I’m stuck here ingesting manufactured culture nostalgia like Blood Dragon, noticing that I’m nostalgic for the days when Vice City was nostalgic for the days when Happy Days was nostalgic for some other bygone decade. I’m noticing myself remembering the memories of memories, waxing nostalgically for a history I don’t have. I was born in 1989 so I have no actual memories of the ’80s to remember, but I’ve grown up with them all the same. It was injected into me, delivered through a never-ending onslaught of cultural products that formed a developmental role in how I now internalize all entertainment.

So like you, I get that the ’80s were silly. I just don’t get why I, too, am supposed to fondly remember a decade that I don’t remember.

George Weidman may pretend to remember the ‘80s with you on Twitter @superbunnyhop.