If you want a writer who will give your heroine strength, ferocity and courage, you turn to Gail Simone. Batgirl picks up the story of Barbara Gordon’s brother James, a psychopathic killer out to destroy his own family. But the story pushes Barbara into the middle as Batgirl and deals with her struggle to find the ground between being a hero and being a sister. 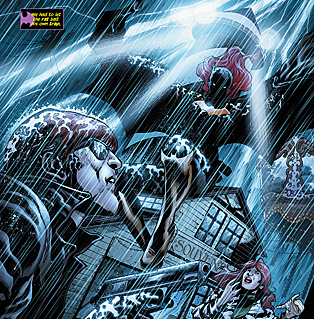 My initial interest in reading Batgirl was to see how DC introduces its first transgender character (Barbara’s roommate, Alysia). Much like Alan Scott’s reveal in Earth 2, this character’s reveal is not given much fanfare and is matter-of-factly stated. I find this problematic for its overall effects on the story. Having a transgender character doesn’t serve much purpose, at least currently, and if DC is trying to break down barriers, making a tertiary character transgender doesn’t prove their willingness to be inclusive.

That being said, I can see how Simone wants to move on to the story, because she shifts away almost immediately to Barbara and her brother. Unfortunately, Simone’s James Gordon lacks the same panache that Scott Snyder gave him in “The Black Mirror.” Now, he’s turned into a standard bad guy complete with bad guy costume. His motivations are a bit opaque, though, and his turn towards stereotypical villain makes him less interesting.

But the final pages are gripping and intense. Barbara’s showdown with James and her mother make for some great story, and this is where Simone does her best work. Due in part to Daniel Sampere’s choice of focus and the overall moody backdrop of the scene, the climax is every bit as tense as a climax should be, and the resolution changes Barbara’s life forever.

Batgirl deals with a multitude of issues and balances all of them nicely. Gail Simone knows how to keep the reader engaged, as well as to make her heroine powerful. In Simone’s hands, Batgirl is a resilient woman. With Simone at the helm, she can look forward to being a worthy character in DC’s pantheon for years to come. 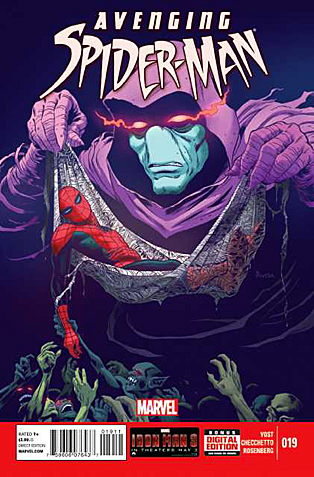 The line between Avenging Spider-Man and The Superior Spider-Man is starting to blur, as Otto’s persona begins to battle Peter’s spirit in the pages of Avenging Spider-Man. Where the story is interesting (if a bit recycled), the real star is Marco Checchetto, who draws some incredible and frightening monsters locked away in Otto’s mind.

This month’s team-up features Spider-Man and Sleepwalker, a guy who roams the “dreamscape” trying to protect people’s minds from evil creatures. Otto finds himself locked away in his own nightmares, dealing with his history as Doctor Octopus, as well as his dark past and his abusive father.

When I said that Avenging Spider-Man treads on recycled ground, this is what I’m referring to. We saw in an earlier issue of The Superior Spider-Man that Otto was abused by his father. Christopher Yost makes this the focal point of the issue, as Otto attempts to free himself from the dreamscape – with the help of Sleepwalker – and hopefully without any lasting scars.

Sleepwalker seems underused here, as readers don’t really get to know him. The story feels bigger than one issue and a lot of their conversation seems truncated and wedged between action scenes. Granted, the action is great, but the journey is over so quickly that it doesn’t have a lasting impression on the reader. And where previous issues of Avenging Spider-Man have given readers a strong foundation in the characters, this one fails to do so, as I know even less about Sleepwalker than I did before.

Marco Checchetto, however, draws some impressive characters. His altered reality of the dreamscape captures the oddness of dreams, and his panel design and construction help to push the chaos of Otto’s mind. Checchetto’s at his best when depicting action. When Otto fights his own father, the fluidity of movement captures the brutality of the situation.

Avenging Spider-Man feels like an organic extension of The Superior Spider-Man, but this works against it somewhat. One used to be able to read the comic without any knowledge of what occurred in the regular Spider-Man series. Now, the book feels hijacked in order to push more of Otto’s plight onto to readers. I’m not complaining, necessarily, but I do find the shift to be pushing what was once a light book into very dark places.

Luckily, Avenging Spider-Man is blessed with good writers and artists. 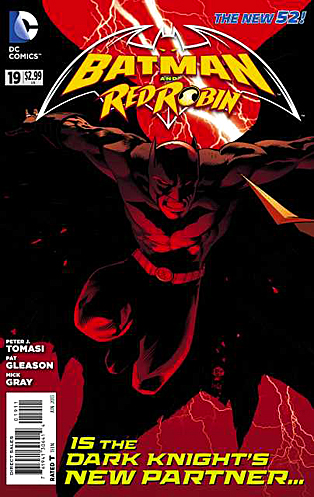 Bannen’s Book of the Week: Peter Tomasi seems intent on pushing the boundaries of Bruce’s grief in Batman and Red Robin. Where the cover introduces the idea of Carrie Kelley becoming the new Robin, the focus is more on Bruce’s attempt to bring Damian back to life (but this time using S.H.A.D.E. agent Frankenstein as a vehicle for his resurrection).

Carrie Kelley is given a great introduction where readers can see her smarts, her wit and her tenacity. She appears a few times throughout the book, and clearly Tomasi has plans for her. She’s every bit as spunky as Damian, but without the years of murderous programming, and she bookends the comic and offers some levity to a very dark story.

Where Tomasi takes a dark turn is when Bruce kidnaps Frankenstein and asks him about the science that brought him back to life. I initially balked at Bruce’s motivation, but Tomasi reinforces the idea that Bruce’s grief overrides his reason. Frankenstein plays the foil and his attempts to rationalize and sympathize are really our voices as readers.

Batman and Frankenstein have a fantastic throw-down where Batman again proves that size and strength are nothing against cunning and tactfulness. Tim Drake’s introduction into the book brings the events of “Death of the Family” full circle and reconnects the broken threads of Bruce’s relationship with his former Robin. Alfred, as well, plays the role of a consoling partner, desperately trying to help Bruce cope while watching him fall apart. His grief is palpable, and he provides another human side to which we can latch onto in a very chaotic book.

My only minor complaint is Patrick Gleason’s Carrie Kelley. Her face never fully forms, and she looks different in every shot. Gleason tries to emphasize her constant movement, but she comes off distorted and goes from looking like she’s 20 to looking like she’s 12. She’s still undefined as a character, so that may be why she’s undefined artistically, but the alterations are noticeable.

Gleason’s Batman and Frankenstein, however, are fantastic. Every moment with these characters is given the utmost attention to detail, and one page in particular, composed of 21 stitched together panels (meant to mimic the stitches on Frankenstein) shows both Gleason’s cleverness and pacing. Frankenstein is imposing and massive, and Bruce is constantly shown as a brooding figure full of rage and violence. The climax of the comic doesn’t help, either, as it only pushes Bruce towards more desperate measures to get his son back.

The comic provides no resolution for death, much like what a grieving parent must experience. While Carrie seems to be a positive addition (as she’s always shown in bright and vibrant colors), how she will break through Bruce’s sadness remains to be seen. But once again, Tomasi pens a fantastic, multi-layered story that is one of the best I’ve ever read.