My formative years were spent playing with G.I. Joes, reading books and comic books, playing Super Mario Bros. 3 on our tired but dependable Nintendo, and exploring the high speed world of fighter jets. The only time my father had patience with anything was when he was building model airplanes. He had a knack for airbrushing the bodies for authentic coloring, using miniature brushes for cockpit details and even melting strands of glue to create radio wires attached to the plane’s nose and tail.

When he showed us the video for Van Halen’s “Dreams,” featuring the Navy’s Blue Angel squadron, I was awed by the nimble twists and turns of the F-18 Hornet. The plane spun and dove with such precision and such ease that I instantly fell in love with the fighter jet. I vowed to one day be a pilot. 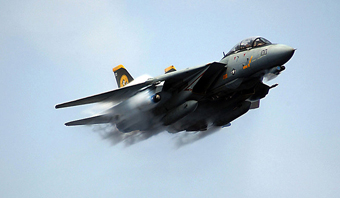 Also around this time, Top Gun was released. I was only six so I didn’t see it in theaters, but I remember my father bringing home the video for us to watch, which we did, relentlessly. I didn’t get a lot of the jokes, why Tom Cruise was badly singing “You’ve Lost That Love and Feeling” by the Righteous Brothers, or why he and Kelly McGillis were gyrating against each other in soft blue light to the tune of “Take My Breathe Away.”

But I did get the F-14, its rugged beauty, powerful engine and killer weapons. From then on, I incessantly searched every detail about every fighter jet in existence. Even now, I can identify them as they soar overheard from the nearby Bangor refueling station.

I also developed an intense dislike of everything Russian. The MiG 28 fighter jets were the perfect foil the American made F-14. The Russians actually play a very small role in the movie, and Maverick never has a direct enemy with a face, but that’s the purpose of the Russians in the movie – they can be anyone, but they can always be the villain.

The more movies I watched, and the more toys I played with, the more my distaste of everything Russian grew. In my world, villains were always Russian. I wasn’t the only one either, and I found that the more I understood about culture, the more Russians kept appearing as the main bad guys. 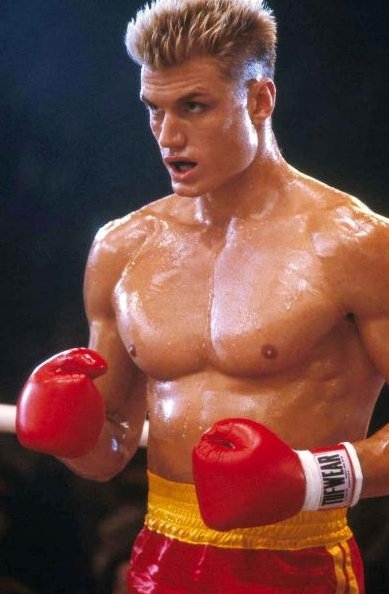 America has been butting heads with Russia for years. Everyone who’s taken a high school history class knows about the Cuban Missile Crisis and the part the Russians played. Ronald Reagan referred to Russia as the “Evil Empire” in his 1983 speech to the National Association of Evangelicals and the connection has stuck, regardless of the friendship Reagan established with Mikhail Gorbachev after the fall of the Berlin Wall.

The big American propaganda wheel also influenced Hollywood, who gladly ate up the ability to lure people to the theaters by exploiting their xenophobia. Take Rocky IV, for example. Ivan Drago, possibly the greatest Russian villain ever, set Russian and American relations back twenty years with his unnatural, chemically produced body, his violent tendency toward murder and the cold, calculated way he promised to break our marble-mouthed American hero, Rocky.

But Drago is only one villain in a string of classic Russian villains. More recently, Gary Oldman played Ivan Korshunov in Air Force One, holding a beloved President hostage aboard his personal flying fortress. People cheered and hooted when Harrison Ford spat “Get off my airplane,” and tossed Oldman’s broken body out the cargo hold.

Even Iron Man got into the act in Iron Man 2, making a Russian super genius into Tony Stark’s nemesis for the film. But the script writers jumped over the first two characters to wear the “Whiplash” moniker and went right to Anton Vanko, changing his name to Ivan, maybe to make a sinister connection between all the evil Ivans to come out of Russian, including Ivan the Terrible.

In Mission Impossible: Ghost Protocol, Ethan Hunt has to battle against Kurt Hendricks, a Swedish born Russian nuclear strategist who wants to start another nuclear war. Why? Not really sure, but it made for great cinema to see Tom Cruise and Simon Pegg infiltrating the Kremlin.

The same goes for videogames, such as Treyarch’s seminal Modern Warfare series, and its main antagonist, Vladimir Makarov. The second game ends with Russia having invaded the United States, starting a third World War. I admit I was swept up in the feeling of patriotism that came with liberating the White House from Russian villainy. 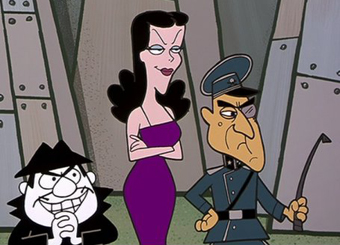 We’ve tried to move away from the Russian villain, flirting with Germany, Japan, China and even trying to create villains out of our current struggles with countries like Iraq, Iran and Afghanistan. But none of them can hold a candle to the red faction. Look at FX’s new series The Americans about KGB sleeper agents during the 1980s. Clearly, a market for USA and Russian conflicts still exists.

The propaganda of the 1950s clearly had a long lasting impact on our lives, as much as we may move away from it. Russia will always be the evil twin, the foil to our American way of life, liberty and the pursuit of happiness. We will always see them as a cold people, living in a cold nation of bears, vodka and failed radioactive power plants.

These are merely stereotypes. Talking with former students who lived and studied in Russia, they say that the Russians are friendly and good-humored. While Americans prefer their leaders to be good speakers, Russians prefer a person who could win in a fight, a reason Vladimir Putin was reelected with almost 65% of the popular vote.

Russia is also a country of rich history, strong morals and powerful rulers. I’m not sure what the Russians think about their perceived attitudes. I would hope that when they reflect on their portrayal in American culture, they’re proud. In our world, the Russians are a brawny and intimidating people, relentless and uncompromising in their goals and values, and a force with which to be reckoned. They are a controlling, ever-present spirit with whom we seem to have a continuous and unwavering fascination.

And you have to admit — they make the best villains.

Joseph Stalin was a Monster