Marvel is building a case against Scott Summers, and Uncanny X-Men seems to be their smoking gun. With Brian Michael Bendis at the helm, and a surprise ally aiding the other side, Cyclops seems destined for a great fall in the very near future.

Bendis does some of his best work in this comic, scaling back on the action and instead going for fluid and engaging dialogue. Comic fans know that Bendis can be word heavy, but the man knows how to write a story that moves swiftly between scenes, keeping its main focus ever present.

And Bendis’ main point seems to be that while more mutants are appearing, their powers are also getting stronger, making them more dangerous than ever. Under Cyclops’ rule, they believe everything they’re doing is for the sake of the mutant race, but Bendis shows just how careless Summers is acting and how possessed he is by his own idea and ego – and how terrifying that is.

Chris Bachalo takes the art seat alongside Bendis, and while I don’t remember Bachalo’s art being this cartoony looking – like Paco Medina’s – his character designs are awesome. Characters look lithe but powerful, and Bachalo’s Sentinels are some of the best I’ve ever seen. In fact, the whole action sequence – from the Sentinels appearance to the destruction afterwards – is drawn with clarity and precision. My only complaint would be the limited color palette. The fight scenes are well drawn, but the images don’t pop off the page. Not that a myriad of colors would necessarily change this, but with such strong visuals, strong colors should have followed.

Marvel’s NOW! line has been consistently good (at least the comics I’ve read), and I think they should be proud of the work they’re producing. Bendis, as the lead for Uncanny X-Men, is the right choice to mix both character and emotion, and Chris Bachalo shows why he’s the right choice for this book. A strong read with a great premise, Uncanny X-Men should be on your pull list every month. 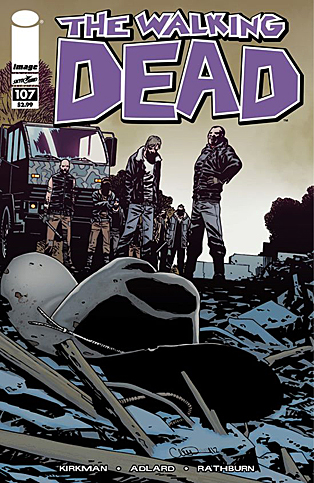 In The Walking Dead world, no villain will ever match up to the Governor. After slicing off Rick’s hand, he stormed the prison where Rick and his crew were staying, killed his wife and his baby, and forced him out of his stable and protected home. The Governor met his fate, but his lasting impact is obviously still visible over fifty issues later whenever Rick lifts the stub of his right arm.

Negan, however, is trying to match up. He’s seemingly ruthless, psychotic and he swears more than a sailor on leave. And Robert Kirkman has been building him to something terrifying, particularly last issue when Carl snuck into Negan’s camp and the comic ended with Negan and Rick face to face, with Negan saying, “What until you seen what I’ve done to your boy.”

Well, no. This issue has to be the biggest letdown of any Walking Dead comic. After building to something that was potentially dramatic, issue #107 delivers absolutely nothing of substance, and I’m starting to lose my desire to keep reading a series that put zombies back on the map and vaulted Robert Kirkman into the stardom.

After his scary words in the previous issue, Negan reveals that he did nothing to Carl. So when he said, “What until you seen what I’ve done to your boy,” he was actually saying that he did nothing to Carl and wanted to prove that he could be reasonable. This brings up a myriad of plot and character circumstances with questionable outcomes. Why, for example, did he smash Glenn’s head open with a bat if he can be “reasonable”? Why did he storm into Rick’s camp and take their supplies if he can be “reasonable”? Why build a character up to be the reincarnation of everything unholy in the world only to find out that the character was trying to prove the point that he could be “reasonable”?

Seriously, this is a waste of an issue. I’ve been wearing kid gloves with The Walking Dead lately because I was sure it would get better and that Kirkman was building to something, but this issue is a waste of time and money. For a series about zombies, none even appear. What we’re given instead is 22 pages of conversation, exposition and the F-word. If you’re looking for a clever way to work the F-word into conversation, this issue is for you. Otherwise, don’t bother.

After this kind of letdown, I have a hard time finding anything positive to say. Usually I can praise Charlie Adlard for his solid and consistent artwork, but he’s relegated to a bunch of establishing shots. There’s no dynamism to the art, no creativity to the panel construction or point of view – just a straightforward, shot-for-shot story that gives its fans nothing of substance to take away.

My ire is really directed at how much of nothing has come about in this entire arc and how terrible a character Negan. He’s good at swearing, but that’s about it, and even now his volley of cursing has become annoying. Kirkman started this arc strong by killing Glen, but since then, the story has been at a standstill and we’ve been given page after page of wordy exposition and nothing to show for it.

Is this enough to drop The Walking Dead? No. I can’t step away from the book because I have faith in Robert Kirkman to do something. But even then, my patience is running thin. Will he miss one reader? God, no.

But I’ll feel better about putting my $2.99 to something more worth the buy. 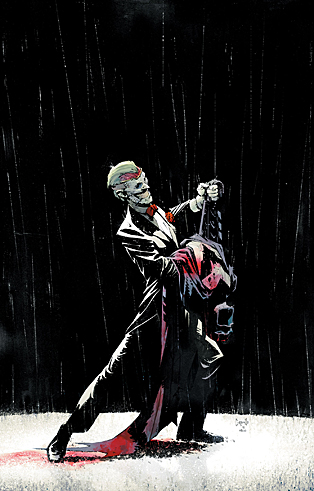 Bannen’s Book of the Week: The Joker does not offer Batman a physical challenge, but their battles never really center on them throwing punches like a fight with Bane, Killer Croc or even Hush would. No, the Joker is a master of mental manipulation, and this is the avenue writer Scott Snyder explores in Batman #17.

To be clear, the comic has a few failings. The story feels a bit bloated and the dialogue turns excessive at points, but Snyder is clearly having fun exploring the Joker’s mind. This is prevalent throughout the comic, because Batman #17 is more an exploration of the Joker’s madness and how it pervades not only everything about Batman but those around him as well.

For what Snyder promised, this comic is a bit predictable, too. The tension at the beginning of the book is palpable, and when Greg Capullo draws Batman’s sidekicks – Dick Grayson, Damian Wayne, Tim Drake, Barbara Gordon and Jason Todd – sitting around a table, faces wrapped in bandages and seated before domed dinner plates, I admit that I was trying to slow down my reading in order to really take in the moment before the Joker revealed what he had done.

And while the reveal is pretty horrific, I was still able to guess what had actually happened. Where the book works, of course, is in the conversation between Batman and Joker, and watching Bruce use Joker’s own methods against him was more cathartic than any beat-down the Dark Knight could have administered. The final moments of the comic are really where Snyder’s best work occurs, as we see the aftereffects of Joker’s rampage. The title of the arc, “Death of the Family,” really makes sense, as I don’t think we’ll see Batman’s team operate the same way for a long while.

Greg Capullo, as always, delivers stunning work. His panel construction, character designs and visual clarity make the book so visually engaging, and his Joker looks absolutely terrifying with his face hanging on by threads. The rest of the art team deserves the utmost credit as well. Jonathan Glapion’s sharp ink lines add copious detail to Capullo’s already powerful pencils, and FCO Plascencia’s colors (particularly with the Joker) bring the characters to life.

Scott Snyder has now delivered two major story lines, first with “Court of the Owls” and now with “Death of the Family.” From reading the solicitations, I’m thinking that Snyder appears to be scaling back on his scope and focusing more directly on Batman and not expanding his plans into a major crossover. I applaud this, as when writers start and finish successful maxi-series, they’re pushed more and more to do the same thing (look at Geoff Johns). From a marketing standpoint, this makes sense because if a story is that good, why wouldn’t you pick up side issues attached to the major thread.

And while Snyder is leaving his other successful series, Swamp Thing, he has no such plans for Batman. As a Batman fan, I couldn’t be happier. Batman #17 is a showcase of everything Snyder and Capullo are capable of, and of course everything for which they’re known. The comic isn’t perfect, but it delivers. And with DC falling behind Marvel in book sales, I’m glad to see that authors still exist who can catapult world-famous characters back to the top of the charts where they belong.