At the end of Smiley’s People, a web of espionage and intrigue that spans more than two decades of the Cold War draws to a close. The drawstrings are held by the slightly pudgy hands of George Smiley, a mild-mannered spy master in the employ of the British intelligence service.

The climax does not come with a gun fight or a chase or explosions of any kind. It begins, actually, in stark silence:

…Smiley sat still as an undertaker; nothing, it seemed, could rouse him.

He does eventually rouse himself, however, and what follows is a methodically manipulative conversation between himself and a Soviet agent. It is an appropriate culmination – the action of both Tinker Tailor Soldier Spy and Smiley’s People is concerned more with people talking about spy craft rather than employing it. 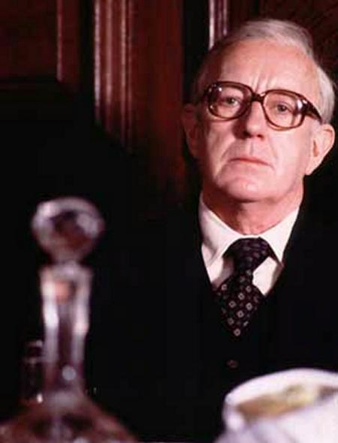 It is easy for the quiet of John Le Carré’s novels to be overshadowed by all the Burn Notices and Bourne Whatevers that have come to dominate the espionage genre. A line was crossed, perhaps irrevocably, in the 80s, thanks to movies like Red Dawn, Rocky IV and just about everything starring Chuck Norris. The cartoonish exploits of James Bond were far easier for an audience to digest that the real moral murkiness of the Cold War. In the movies, the solution to the communist problem was almost always a bullet. Even the most recent film adaptation of Tinker Tailor Solider Spy boasts a surprising uptick in gun play and action in comparison to the source material.

That kind of anti-communist entertainment was meant to be comforting in an uncertain time. George Smiley’s world, however, is anything but. With the quiet comes a fraught tension. People become unmoored in a stormy sea of ideologies. The greatest danger these spies face is not to believe in the wrong thing, but to cease believing in anything at all. Lofty political goals are generally secondary to merely maintaining a status quo – be it one as a diplomat or a pimp.

Videogames can learn from this. The Smiley books embrace a kind of language of play even as they deal with heavy subjects of patriotism, morality and duty. Le Carré dubs the central office of MI6 the Circus and populates it with groups like the Lamplighters, Scalp Hunters, Babysitters and more. They are all after treasure, their jargon for valuable intelligence, to get an upper hand in against the Russian’s master spy, codenamed Karla. The long term rivalry between the British Empire and Russia is even, historically, called the Great Game. All this lively vocabulary is like nervous laughter over a menacing soundtrack – it is all the more threatening for the pauses between the notes.

The natural inclination of developers to creating increasingly fine-tuned mechanics for shooting things tends to ignore the potential to create moments geared to inspiring or delivering complicated thoughts. There is a distrust of quiet in videogames. When the bullets stop flying and the explosions die down, there is inevitably someone squawking in your ear, or the music is swelling, or an automatic door is rumbling open. Games are constantly demanding that you pay attention and get to the next objective. It is rare to have an uninterrupted of stillness.

Most of the time, I love the din. With it comes an irrepressible energy that draws you back in. No matter how frustrated or tired you may be, you know that there is always another thrill around the corner. And yet, lately, I crave quiet. I want time to think.

Dead Space 3 is partly to blame – it never knew when to shut up. Every time I wanted to look out a window at the vastness of space, or soak in the grim atmosphere of a ransacked room, or stand in a blizzard to be chilled by the isolating cold, a necromorph would inevitably leap at me. About a third of the way through the game, you leave the safety of your ship to maneuver in open space. When the airlock releases, the game is finally, blessedly, silent. It is awe-inspiring. That is, until you glide too close to a piece of wreckage and its resident monster starts shooting at you – a monster that isn’t even a threat, just a pest. There is a dark beauty in Dead Space, but the game seems too self-conscious of its scars to let players see them for any longer than a moment. 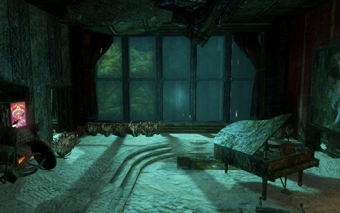 BioShock’s Rapture also suffers from this. With the exception of Sander Cohen’s Fort Frolic, exploration largely takes a back seat to shooting wave after wave of howling splicers. Why can I not walk among the corridors without disturbance, a man in an inside-out aquarium? A similar problem occurs in roiling dust of I Am Alive – the mechanics for bluffing opponents with an empty gun are brilliant at first blush but quickly become tiresome. The tension in the gamble loses meaning in repetition.

I don’t believe all games need to embrace this kind of quiet. The best example of it currently is Dear Esther, which is an interesting but ultimately unfulfilling experiment. I merely suggest game developer not be afraid of the quiet. Hopefully forthcoming games like Gone Home and The Vanishing of Ethan Carver can use their lack of combat to give players cause for reflection. After all, as thrilling as they can be, shoot outs very rarely give way to weighty philosophies.

No, the way lies with George Smiley. Out of shape, pale, dressed in ill fitting clothes – he sits entirely still, pondering, contemplating, illuminating the outside world with the light of deeply internal insight. And it is all born from silence.

A Jumps B Shoots: Episode 8