The Black Beetle first started popping up on Pulp Sunday, a blog created by Francesco Francavilla that is dedicated to pulp and noir. The character appeared in a series of mock movie posters and lobby cards, paying homage to the kind of pulp/noir that comic readers really only got to see in Lobster Johnson and Incognito. Today, Dark Horse Comics is giving the costumed crime fighter a series of his own in The Black Beetle: No Way Out #1. 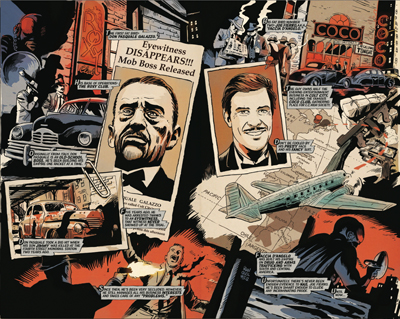 We here at Team Unwinnable love pulp! We have our own pulp book club, after all. My own relationship with it begins with The Shadow.  Growing up, my dad used to listen to reel-to-reel recordings of the 1937 radio drama with Orson Welles. The story details are a little fuzzy, but I will never forget that laugh – it was damn haunting! The first time I saw The Shadow was at a flea market, where a dealer was selling some 1970s DC comic series. I loved the clash of red on black, as well as his blazing 45s. Those early impressions of The Shadow, combined with my love of Batman, led me to my love of pulpy crime fiction.

I’ve been following Francesco Francavilla’s work since Frank Frazetta’s Dracula Meets The Wolf Man. I then followed him to Dynamite’s Zorro, DC’s Batman: The Black Mirror and Marvel’s Black Panther: The Man Without Fear. His black shadows, clever composition and deft storytelling grew better with every comic I read. Of course, it didn’t hurt that Mr. Francavilla was working with top-notch writers like Steve Niles, Matt Wagner, Scott Snyder and David Liss on those books. However, he’s tackling the scripts solo with this book and the quality of writing on Black Beetle #1 is on par with his previous collaborators.

The Black Beetle: No Way Out #1 is a gorgeous and compelling comic book. Francesco Francavilla’s heavy inks and autumn color palette pull the reader into Colt City’s underworld like two bruised and calloused fists grabbing you by the shirt collar. The world Francavilla builds with his writing and panel design evokes a nostalgia for big cars, giant Zenith radios and glass-jawed gangsters. The Beetle himself has a car reminiscent of Batman’s original ride (pre-Batmobile, Dear Reader), a nifty dart pistol, stylish goggles and of course, a helicopter strapped to his back! The Black Beetle takes me back to that first image I saw of The Shadow – his guns drawn and his coat flowing in the wind – and Colt City screams the same kind of lurid danger. 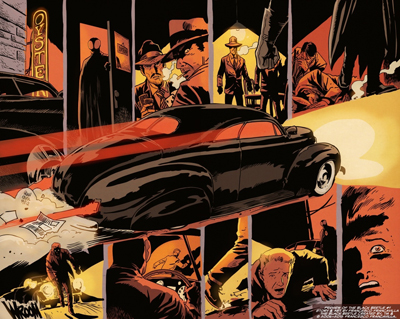 The first issue begins with Black Beetle on a stakeout. Two of Colt City’s most notorious gangsters are having a sit-down, and Beetle wants to crash the party and haul them off to jail. As the Beetle collects evidence, the building suddenly explodes, killing not just the Beetle’s quarry, but a sizable chunk of both crime families and their flunkies! The determined Black Beetle then sniffs around the underworld’s remains to find out just who took out the scum of Colt City. Was it a power play or a less scrupulous vigilante?

At its heart, this is a mystery. Francavilla spends the first issue building the world through a series of intricately designed panels. There are four beautifully drawn double-page splashes in this issue, but they convey a lot of information about the Black Beetle’s world and service the story and tone of the book. Colt City is a pulpy metropolis, trapped somewhere between the 1920s and the 1940s. There isn’t an ounce of cynicism or parody in this book. It’s clear that Francesco Francavilla is pouring everything into The Black Beetle: No Way Out. The book is a sincere love letter to pulp and noir.