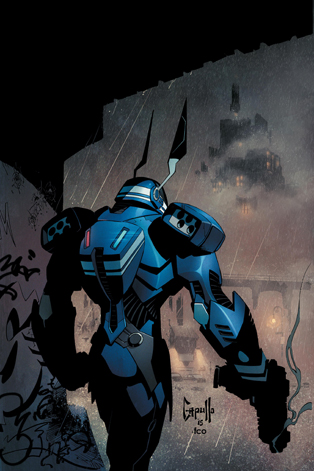 Alright, people… DC says it’s time for a new Batman.  What say we?  I’ll whip out my finely-tuned Bat Skeptic-meter and use it on some of last week’s Bat-releases.  Turns out, when the meter is used on Batman #41, the answer is a cautious “yes.”  When used on Detective #41, the answer is a firm “no.”

Scott Snyder’s work throughout the Batman title has laid the groundwork for this next chapter in the life of Batman, which appears to carrier over into other Bat-books as well.  Batman/Bruce Wayne may or may not be dead after his latest and most brutal confrontation with the Joker (Batman #40.)  Something mysterious happened over the past three months that made the Gotham City Police Department want to work with Batman, but only if they can be in charge of Batman, it appears.  So, Jim Gordon is now Batman (cue record scratching and stopping sound.)  What?!?

Back to my Bat Skeptic-meter….  My comic book friends have heard my rants about how I like my Batman: human, flawed, low on the supernatural silliness, and preferably with his underwear on the outside.  So how do I take this new direction?  Honestly, reading it first in Batman #41 makes me okay with the change.  Had I read  Detective #41 first, the idea would have been tainted.  I’ve enjoyed Buccellato and Manapul’s work on the Detective title so far (particularly the “Icarus” and “Terminal” arcs) but Snyder and Capullo really teach a Master’s level class in Bat-storytelling, making the transition more believable.

I don’t know what threw me off with Detective.  Maybe it’s the opening fight sequence, featuring the new Batman vs. pro wresteler Sting circa 1997 lookalikes?  Is it new-to-the-team artist Fernando Blanco?  I like that Detective focuses heavily on the GCPD, so if things continue in that direction, I can be happy.  Batman goes more inside Jim Gordon’s head (his description of the new Batman suit as “Robobatbunny” is hilarious) and the external forces that made him choose to be Batman. 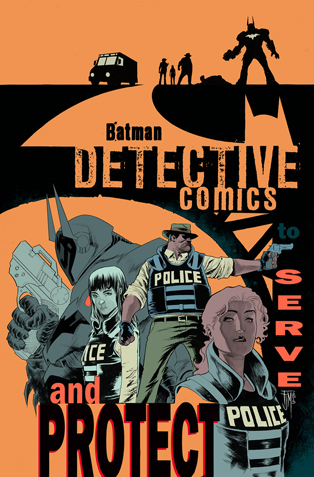 The logical part of me understands that Batman is probably better off, and maybe more effective, in a protective exoskeleton.  But, re: my above rant about my Bat-preferences, I’m having a hard time wrapping my head around this.  The Batman Beyond-esque outfit the new Batman wears while in his new Batman suit doesn’t help (although I thought it was pretty cool at first glance, I remembered I don’t like change so I will settle on “guarded.”)

I’m definitely rooting for a return to form for Batman in the near future, but I fully trust Snyder and Capullo to take us on a fun ride in the meantime.  Buccellato, Manapul and Blanco have the means to make strong contributions to the current state of things, so I’m hoping Detective #41 is just a slip at the start. 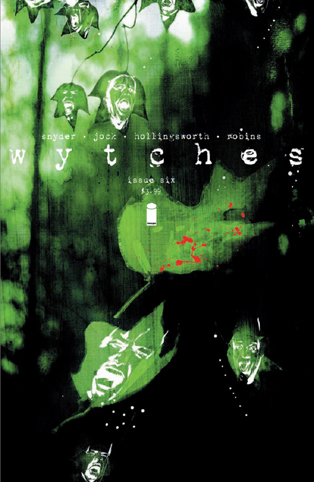 Where issue #5 left its characters in a pretty dire situation, issue #6 – the last of the first arc – picks up immediately where the previous issue left off, amping up the action, violence, creepiness, and ultimately the humanity of its characters which makes Sailor and Charlie’s ordeal all the more harrowing. This issue provides a solid closure to its initial run, but leaves its ending vague and tantalizing enough to lure readers back for more.

Snyder writes his comic in a very Stephen King-esque fashion. There’s a great plot twist, a few harrowing moments in the den of the Wytches, and a narrative connectivity that suggests deep thought and planning on Snyder’s part. What the comic really does is move Charlie from a slack-jawed, unsure father to a strong and determined character. Watching him risk his life for Sailor is a testament to the power of a parent’s love.

Additionally, the added twist involving Sailor’s mother really comes out of the blue, but it really works. It explains a lot about character motivations while providing some serious narrative depth to the secondary and tertiary characters of the series. The last pages make clever use of Charlie’s bag of tricks as he combats the Wytches and the townspeople in a way that leaves them reeling.

Furthermore, Jock’s art is the best of the series. I’m not a huge fan of the paint splotches on the page, but they work well here because of the tonal darkness of the issue. The color washes in particular add urgency to the situation, especially considering the dark nature of this issue.

The comic closes with Charlie saying “Time for the next chapter.” I couldn’t agree more. Wytches has carved an eerie, sinister niche for itself. It’s reinvented a well worn supernatural legend for a new generation, and these Wytches are much more terrifying than a green crone with a wart and a pointy hat. Given Scott Snyder’s penchant for solid horror, I see the second arc getting even more disturbing than this one,and while the fate of many characters is hanging n the balance, I feel confident that Snyder is not a person about whom we can assume. I don’t care though. I loved the first arc of Wytches, and I can’t wait to see what he has in store for us when the series returns. 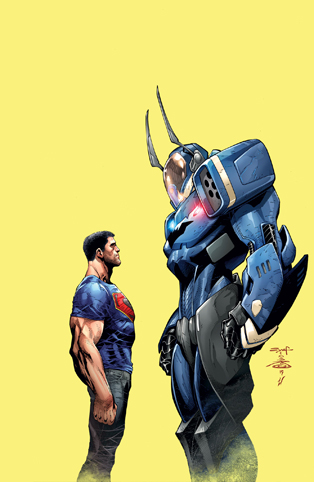 I have a problem with the new Superman status quo, and it’s not the face that he’s basically vulnerable when he uses his “solar flare.” It’s that his vulnerability is so inconsistent that we, as readers, don’t know which Superman we’re seeing until he start throwing punches. And for a guy who has made his living as a person who stands for truth, justice, and the American way, he seems much darker and much more prone to violence than ever.

This issue of Batman/Superman should really be about Clark meeting the new Batman (and if you haven’t read Batman #41, I’m not going to ruin the surprise for you). Sure it makes sense that he can’t see the person in the suit because he doesn’t have his x-ray vision, but Greg Pak picks and chooses moments to make Clark human, so we’re not sure when he has his powers and when he doesn’t . This occurs in the same scene sometimes. The first encounter between Batman and Superman is what you’d expect – solid punches and wounded heroes. But, Clark just as soon proves that he has the ability of super speed, so why wouldn’t he have some of his other powers?

This inconsistency occurs with the characters as well. Lois revealed Clark’s true identity, but he seems more apologetic than she does. Clark is shown to be more of brute battling bullies than a superhero. Again, I’m not against his newfound vulnerability, but the one aspect of Superman that never changes is his demeanor. Here, however, he’s portrayed as a loose cannon and a brute force.

Ardian Syaf’s illustrations perpetuate this new Superman, but the consistent grittiness and blood caked features get tiresome, especially when Clark doesn’t change his facial expressions for the first twelve or so pages. He only softens when he sees Alfred, and while I understand the difficulty he faces as a character, he’s always faced adversity and found a way to overcome. This new version of Superman is a bit too dark for my tastes and he feels more akin to the Man of Steel Superman than the Richard Donner Superman.

Maybe this is DC’s ploy to raise awareness of their cinematic universe, but the Superman of the comics seemed immune from all the darkness until now. I hope that in the future, Pak backs off this newer, graphic version of Superman because something is lost in the translation, and I don’t think DC will get it back if they continue to perpetuate *this* type of character.