Recently, David Morrell has come out against this comic. On his Facebook page, he wrote that Amazing Spider-Man #700.2 was a “terrible version” due to some last-minute changes to the comic, including the addition of some thought boxes, word boxes, “weak jokes” and a statement that “destroy[s] the poignant tone of part one.”

Personally, I enjoyed Amazing Spider-Man #700.1, regardless of its moroseness or melancholia. I found myself captivated by the story of a mentally-drained Peter Parker putting off his duties as Spider-Man for one night as a blizzard swept through New York City. On the final page, Peter decides he must go see his aunt, and so he slips out into the cold night to make his way from New York City to Queens. 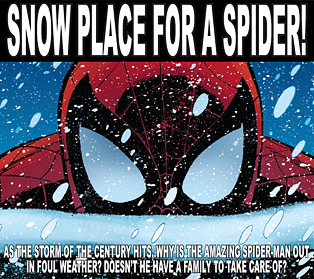 Unfortunately, issue #700.2 is not good. What started as an engaging tale of self-doubt becomes nothing more than a story about Peter being derailed in his attempts to save his Aunt May. The cold that he obsesses over is nothing internal; it’s actually just cold weather.

Talk about a bust.

My biggest gripe is that Morrell’s issue brings nothing new to the character. Peter is always derailed while trying to do things with his family and friends. Spider-Man 2 was all about Peter’s duality as a hero and how that impacts his ability to be anything else, so Morrell is not treading new ground. But his first issue was so promising that I can’t help but feel cheated by the outcome.

For example, when Peter finally makes his way to Queens and saves his aunt, we see a montage of Peter being a good nephew. It’s hokey and overly saccharine. The intensity of his previous travel evaporates as he chops wood, fixes broken windows and shovels the walkway.

Even Klaus Janson’s art isn’t as sharp. The end of the issue looks stilted and stiff, lacking all the detail of the previous pages. Spider-Man in the blizzard is interesting and tonally foreboding. Spider-Man in a knit cap is not.

Maybe I’m being too harsh on Amazing Spider-Man #700.2, but I wanted more for Peter’s resolution. I wanted to see some true inner turmoil and watch as he overcame his demons. I didn’t want to see him shiver through a winter storm. I live in Maine. We see that kind of heroism on a daily basis in January.

If the comic has one silver lining, it’s this: Peter Parker is Spider-Man again. I can at least enjoy this moment for a short while before I’m deposited back into the arrogant, egocentric world of Doctor Octopus. 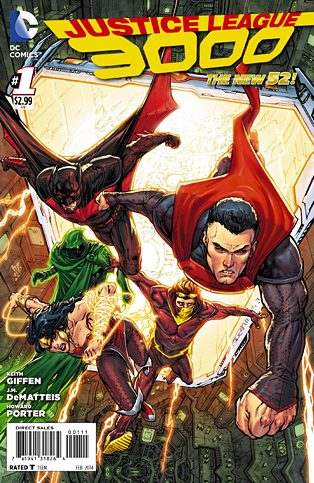 Have you ever thought of what the Justice League would be like if they were five squabbling siblings?

Keith Giffen has. And the results are not good.

The idea behind Justice League 3000 is that Cadmus has decided, one thousand years after the death of its heroes, to use their DNA to make versions of the true heroes of the Justice League, but without all the drive, will or personality that made the Justice League a staple of the DC Universe.

What we’re left with are five truly despicable characters, none of whom has any shred of interesting humanity about him/her. We see page after page of these people verbally duking it out because their egos are just too big to be contained. Giffen seems to want to explore a league of heroes with nothing to lose and nothing that ties them together.

But this novel approach fails to recognize the most important aspect of comic book readership: fans – people who actually go out and spend the money on the books because they enjoy the characters and they enjoy the story. Justice League 3000 reads more like an episode of 90210.

The comic has other problems as well. Its pacing is weak, especially at the onset. Also, the jocular tone that Giffen employs gives the comic little respect or earnestness for its source material. The Justice League is the principal gathering of DC’s greatest heroes. This comic, however, is a mishmash of rejects with no personality, and it’s backed by a weak premise to boot.

That being said, I’m not averse to the costume redesigns. I like the way Howard Porter captures the essence of the characters while still putting a unique spin on an updated costume. And the art isn’t bad, save for a few moments where characters are so closely illustrated that you have to sort them out through their raging egos. There’s a cartoonish aspect to the visuals, one that works well with the campiness of the story. But Porter is really done a disservice in trying, at all times, to use serious illustrations in a very silly story.

Buried beneath all the hamminess is a unique concept: take the Earth’s greatest heroes, strip away their drive and then put them together. But the execution is weak, and for a first issue, this is a poor sell on Justice League 3000. I don’t care at all to see how these people interact with each other and eventually come together. They’re unlikeable, hubristic and self-absorbed.

I prefer my heroes classic, thank you very much. Asking readers to swallow a pill like this is ill advised. 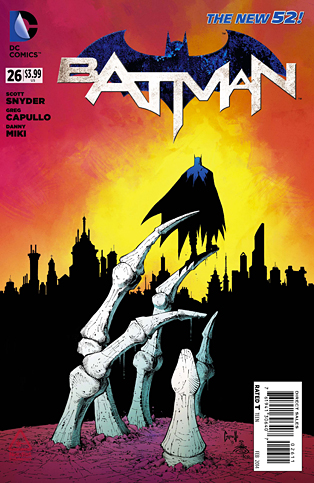 Bannen’s Book of the Week: Density in storytelling is not a bad thing.

Batman #26 is a layered tale with threads piled on top of the other, but not in a way that makes the comic a labor-intensive read. Instead, the story is fluid and lucid, adding more depth to Snyder’s already impressive tale of Batman’s early years in Gotham.

Snyder wraps up his cliffhanger from that last issue, a comic that ended with Lucius Fox injecting Bruce Wayne with some chemical while the mysterious bony freak looked on. Any fan of Batman knows that Snyder isn’t afraid to take chances with canon, so I assumed that we were just seeing a darker side of Lucius Fox rather than the soft-spoken, sage-like persona fans have ingested from Christopher Nolan’s Batman trilogy.

But Snyder also provides great surprises, and this issue is no different. Lucius is not what he seems (from the previous issue), but neither is Jim Gordon. When Gordon enters the picture, fans get a real taste of the tension Bruce experiences as a vigilante in a crime-ridden city like Gotham. Gordon’s tale is the meat of the story, and we’ll definitely never look at the character the same way again. But I enjoy that the trust built between Batman and Gordon is a sure thing; it’s going to develop over time so that each one knows the other is truly on the winning side.

Besides the solid characterization, Snyder writes some intense action sequences. Bruce’s resourcefulness is on display all the time, and I love how Snyder likes to put his hero in situations where he has to rely on his cleverness rather than his gadgets. The opening sequence is indicative of this. And while the comic ends abruptly, I hope that Batman will pull a fast one to escape from the dire situation he finds himself in on the final page.

Snyder’s partner in crime, Greg Capullo, draws dynamic and powerful visuals in this issue. His already impressive style is complemented nicely by his creature designs. And while I didn’t comment on it in earlier issues, the decision to draw Batman in his original costume – with odd-shaped ears and purple gloves – shows a desire to preserve the beginnings of the character and pay homage to the work that has come before.

Capullo is truly a master of setting tension, as his close up shots – particularly those that involve people’s eyes – translate the emotion of the scene, be it sadness, anger or shock. His detail is what makes Batman such a great book. Snyder is the voice but Capullo is the vehicle, and they’re churning out one great issue after another.

This haunting look into Bruce’s past is turning out to be one of the best series Snyder has ever written. Clearly he has respect for the canon, but he’s also deftly carving out his own niche as one of the great Batman writers. With writing like this, I’m okay sticking around in the past for a bit.

We’re sure to learn something new.

Rookie of the Year: 365 Days Of Summer