I recently found myself unable to properly expound upon the virtues of Persona 4. My deficiency might have been a problem of venue. We were recording a podcast and I had the weary resistance of Stu Horvath in one ear and the matter-of-fact New Jersey nay-saying of Charles Moran in the the other. In the end I managed to just scrape the surface of what makes the game so great. I seemed to win over Jay Pullman, the host of the podcast, with tales of  Kanji’s dungeon – a crawl through a steamy bathhouse that culminates in one character’s coming to terms with homosexuality. 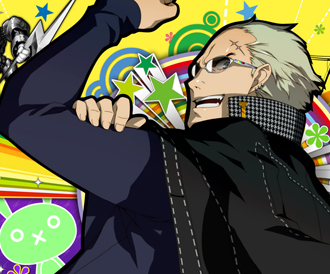 And as juicy as that one anecdote is it only begins to shed light on what makes Persona 4 so great. To me the game feels like a culmination – a decades-long maturing of a videogame sub-genre that takes classical elements and elevates them with smart writing and thoughtful application of theme. Already I fear I’ve put half of you to sleep. Here’s my best description of the game in plain English.

Persona 4 casts you as a Japanese teen who has just moved to a rural town to live with his widower uncle and young cousin. At first glance your are concerned with the day-to-day of youth – going to school, navigating relationships and figuring out who you are. But soon a supernatural element comes into play. A strange “Midnight Channel” appears on the TV, seeming to depict the dark, inner secrets of those who make the air. You soon discover, in a Videodrome leap, that the dark world of the television can be penetrated and explored. And such treks will be vital to stop a mysterious killer who is using this alternate dimension to kidnap and murder your classmates.

As far as setting go you don’t get more fresh than this when it comes to role-playing games. But what is so great about this game is how nicely all the trademarks of the traditional JRPG dovetail into the milieu. Dungeon crawls become Lynchian excursion into the psyches of your friends. Your day-to-day relationships with friends and mentors  are a venue for buffing your stats. It’s more than just window dressing for an upgrade menu. Persona 4 gamifies personal relationships and, in doing so, underlines the real-world benefits of being a social creature. Every time you come to understand others you become stronger. You come to know friends and allies through their foibles and their fears. You see them at their most raw and you learn, one messy slice of life at a time, that though our experiences make us all infinitely unique we’re all fighting the same fight. All this is in service of a classically traditional JRPG experience, but the presentation, the ideas themselves, wrapped around the framework make the entire affair feel new and vital.

I suppose that’s the elephant in the room. If you’ve never cared for old school Japanese role-playing games why should you care about one that perfectly embodies the genre? Because you’ve been wrong all these years.

You come to know friends and allies through their foibles and their fears. You see them at their most raw and you learn, one messy slice of life at a time, that we’re all fighting the same fight.

Believe me, I’ve spent plenty of time griping about random battles, turn-based brawls and tedious dungeon crawls. And, for the most part, my complaints were founded. I have played more than my share of threadbare examples of the genre. To tell the truth I have tried again and again to appreciate the predecessors of Persona 4 only to find myself turned off by one weakness or another. And there’s also the fact that I have spent the last five years or so recalibrating my tastes, coming to appreciate antiquated approaches to games – the rogue-like, the text adventure, the turn-based RPG. And I’ve come to learn that those ways of doing things aren’t becoming less and less common because they’re outdated, but because the truly excellent examples were getting lost among the dross.

I’ll admit that coming to really appreciate Persona 4 has been part of my personal gaming journey, but I can’t let go of the fact that the game deserves admiration because it does so many things right. Through thoughtful storytelling it reframes the familiar, reminding us (maybe even teaching us for the first time) why certain ways of approaching the role-playing game endure. And, most importantly, Persona 4 works fabulously as purveyor of empathy, putting us into the shoes of somebody different and teaching us the ways that we’re all the same. Most brilliant is the way that the game ties all the important decisions of a role-playing game, how to grow your character in anticipation of the next fight, into the choices you make in your personal life. It’s all connected and it all matters.

The Enslavement of Josef – A Machinarium Retrospective