It is with more than a little embarrassment that I admit to being the precise target audience of Reality Bites. The 1994 Generation X dramedy spoke directly to me, a 22-year-old child of divorce, a latchkey kid raised by reruns and MTV. I think I know why I identified so closely with those slackers – because we were kids with no culture but for the one we made. Our shared experiences weren’t thousand-year-old rites of passage but cheesy commercials for Carvel ice cream cakes, scenes from our favorite movies and lyrics from pop songs they (mostly) didn’t play on the radio.

And, though the whole Generation X thing has faded with adulthood and the passing of Kurt Cobain, I think that the tribe still meets. And they’re inducting new youthful members.

I don’t believe that television is truly enjoying another golden age. Most of the shows everybody loves are just as banal as the shows that were on when we were kids. But I do notice something special going on amongst the people who love television. At first, I couldn’t understand why somebody would go to a place like The A.V. Club to read a recap of a show they just watched. But I soon realized that these posts weren’t just miniature reviews of individual episodes of television, but jumping-off points for jokes, discussion and community. They are meetings of the tribe. And they happen almost every day of the week.

Looking at this phenomenon from the gaming side of the aisle fills me with envy, because we are incapable of having this kind of fun. Much of this is due to the nature of games. We all play them differently. Games are chameleons that change to suit us. They are like fortune tellers in that they all have the same thing to tell us, but they know how to word it specifically in a way that best suits each seeker. They’re like Firefly companions in that they become the lover we need so that we can open up and reveal to them our fantasies about ourselves.

To put it simply, videogames make for lousy shared experiences. And gamers make for lousy brethren. If you don’t know this about me already, I don’t find my fellow gamers to be a terribly likable bunch. We argue and accuse more than we discuss. We’re haughty and proud rather than welcoming and constructive. And, for the most part, we have piss-poor senses of humor. That’s part of the miracle of Penny Arcade. Gabe and Tycho have a great talent for discovering the things we do share, the pervasive attitudes (some more regrettable than others) and the rare in-game overlaps that everybody can relate to. Their PAX conventions, despite the dickwolves misstep, almost never fail to convince me that the gamer soul is worth saving. Then I go home and read your comments and hear you on voice chat and forget that PAX ever happened. 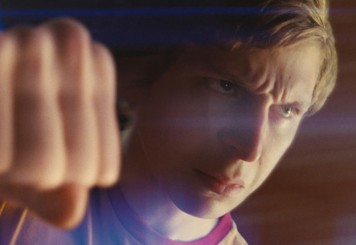 For the most part the discussion of gaming takes on two depressing tenors – the pissing match and the circle jerk. Nearly all gamers fancy themselves experts. They know exactly how Blizzard should implement hunter skills. They know the plot to their favorite game inside and out and know that only a moron couldn’t comprehend the intricacies of the game’s storytelling (told entirely in books and audiologs, of course). They are bona fide experts in their chosen field of expertise.  But I’ve found that these myopic masters of one rarely have the perspective to be interesting people to talk to. Gamers are killer ombudsmen and terrible conversationalists.

I held out hope that Scott Pilgrim Vs. The World would help unify the gamer tribe. But, predictably, we fractured and fought. The “I Hate Michael Sera” party won the nomination and torpedoed our one shot at holy text. But then, a selfish part of me doesn’t want to sit down in the pews with my gamer family. Because, like the rest of you, I’m convinced that I’m the smartest gamer around and that nearly everybody else has their head too far up their own ass to be worth talking to.

Pretension +1 is weekly column by Gus Mastrapa about the culture of videogames and the people who play them. Self-loathing is often part of the program. Follow him @Triphibian for more!

A Reason to Fire Up the DS Again