The five Halo titles developed by Bungie spoke of a much larger world beyond the confines of the console games. It was a place described in incidental dialogue among the marines of the United Nations Space Command, in computer terminals found on a gigantic alien installation called the Ark and in the live-action commercials for Halos 3, ODST, Reach, and the Neill Blomkamp directed “Landfall” live-action shorts. It was a universe described in glimpses and whispers.


Halo 4 feels more like an adaptation than an adoption and continuation.

The best Star Wars expanded universe books were Timothy Zahn’s Grand Admiral Thrawn trilogy; Zahn clearly understood what makes Star Wars. J.J. Abrams managed to channel the spirit of Gene Roddenberry’s original Star Trek series and gave us representations of Captain Kirk, Spock and Bones that felt genuine. The Halo universe, for its part, was fleshed out in graphic novels and books and anime and
full-motion comics that stayed true to the spirit and aesthetics of Bungie’s universe, carrying much more aesthetic unity than either of those other huge science fiction franchises.

That’s because a lot of that media was produced under the watchful eye of 343 Industries, Microsoft’s development and intellectual property 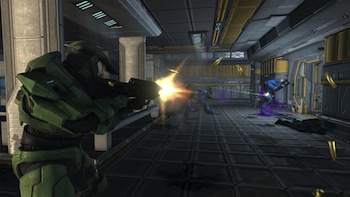 Aside from cross-media, 343 was also responsible for the Halo: Waypoint app on Xbox Live, a faithful collection of Halo media and lore; the 2011 high-definition remake of the original Halo was handled respectfully, too, and left me hoping a Halo 2 remake would get the same treatment. Finally, Halo 4’s live-action lead-in, Forward Unto Dawn, felt very true to series canon. Given their track record, I had no reason to fear for the future of the Halo franchise when 343 took over with the last installment.

I knew something was wrong with Halo 4 the first time I fired an assault rifle.

You’ve probably watched some or all of the Star Wars movies. You’ve probably played some Star Wars video games. Maybe you’ve even seen the Clone Wars cartoon. In all of these depictions a lightsaber always sounds the same. You know the snap-hiss of a blade igniting, the woom-woom of the weapon being swung around, and the sharp crack of two light blades striking one another. That sort of consistency is what keeps all those various media unified, and makes them feel like depictions of the same space. 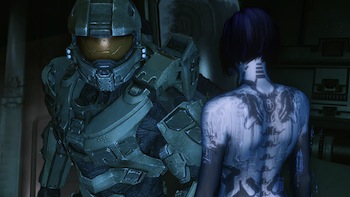 Now imagine you’re watching a new Star Wars movie and the lightsabers don’t sound the same and that other previously consistent aesthetic factors have changed, too – it might not seem like Star Wars anymore, but rather something one step removed. Bungie had evolved their designs throughout all of their Halo games but when it came to the essentials like sounds and character design they staid their own course, with only small, iterative improvements from game to game.

Assault rifles in Halo used to sound smooth. Now they’re loud and staccato. The engines of a Warthog used to sound well-tuned. Halo 4’s is more like a Kawasaki badly in need of a new muffler. Battle rifles are aurally closer to laser guns than a three-shot burst projectile. Familiar enemies like Elites, Grunts and Jackals don’t look right. Elites are too skinny and their faces are wrong. Grunts don’t always wear gas masks (they breathe methane) and emit nasally squeaks reminiscent of pigs on helium. Jackals used to look avian; now they look decidedly reptilian.

Halo 4 feels more like an adaptation than an adoption and continuation. The danger of adaptation is straying just far enough away from the source material to develop into something unrecognizable; this has become my fear for the Halo universe under 343 Industries.Where I most feel Bungie’s absence is in the storytelling. 343 took Bungie’s whispers and glimpses, turned them into a sledgehammer and cracked the audience in the skull with it.

The Forerunners – the mysterious, ancient race which built the Halo rings and whom the alien Covenant worship as gods – had never been 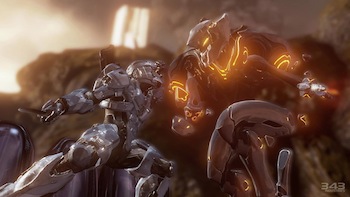 shown before other than glimpses in the Halo: Legends anime. They were left, like a Hitchcock horror scene, to the imaginations of the fans. Halo 4 not only pulled back the curtain on the Forerunners and ruined the mystery, they’ve also molded them into unimaginative
archetypes.

Halo 4 ends with a starfighter scene right out of the original Star Wars’ trench run. The revelation that ancient, space faring humans existed in the time of the Forerunners not only flies in the face of Halo lore but comes off as a cheesy reveal trying to be profound. Master Chief used to be practically mute; now that he’s writing novels out loud I’m beginning to feel the silly, empty nature of the character like others have for years.

I don’t want you to think that I dislike Halo 4. I don’t. The visuals are a testament to why we don’t need another console generation (yet). The “pick the right tool for the job” interaction between weapons and encounter areas that I always associate with Halo is still there. It took me a while to adapt to the new score, which is more orchestral and less choral than the Martin O’Donnell’s previous scoring, but it’s grown on me.

Halo 4’s multiplayer might also be the best in the franchise. Bungie stodgily resisted adopting the conventions of the multiplayer FPS genre like sprinting (sprinting!) or class builds and loadouts. 343 has taken just enough of those conventions and added them into Halo 4 to bring the multiplayer up to speed, which is probably why I’ve already played more multiplayer in 4 than I did 3’s and Reach’s combined. 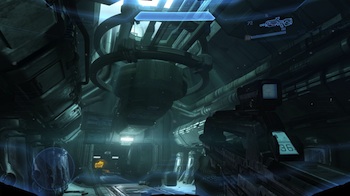 It’s a different Halo, however, and more so than I’d expected. Where Bungie opened doors to storytelling, it feels like 343 is closing them. Bungie gave Halo a larger presence by filling in gaps; new Halo installments (in part out of necessity to keep Master Chief’s story progressing) may have to leave all of that potential behind.

Creatives want to put their stamp on things. I didn’t expect 343 Industries to parrot Bungie’s spirit, but I’ve gone back to playing all five original games over again because I don’t want to lose sight of that universe – the true universe, the one I’ve grown to love as much as Star Wars or Star Trek or any other major sci-fi franchise.

Halo 4 may be the first game in a new trilogy, but it’s also an ending. This is Halo without Bungie, and it’s not quite Halo anymore. Maybe I hoped for too much.

Nerd rage with Dennis Scimeca over Halo 4 on Twitter @DennisScimeca.