You may recall I’m a deadbeat gamer, one who leaves vast portions of games unplayed.

But now I’ve completely lost it.

I have begun to buy games and not even take them out of the packaging.

For days, a shrink-wrapped copy of Assassin’s Creed III has been sitting on my coffee table, taunting me ineffectually.

I have read the back of the box – aloud – to my girlfriend, friends, family and overnight guests. I have vowed to each of them the following: 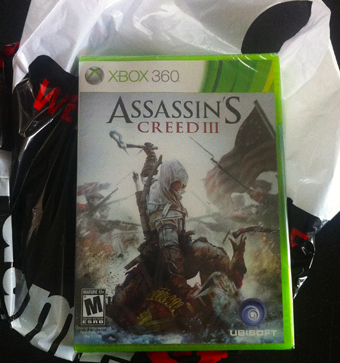 “I will fight to protect my land and my people!”

“I will strike with a vast array of weapons!”

“I will conspire with real historical figures!”

“I will engage in naval warfare!”

“I will experience acclaimed multiplayer!”

“I will ignite the flames of a young nation’s revolution!”

So far, though, I have done none of these things.

I have eaten dim sum, I have shopped for birthday presents and household goods, I have entertained weekend guests, I have watched episodes of The West Wing on Amazon Prime and I have even blazed through a summer’s worth of Mad Men on my DVR.

But I have yet to crack open the Assassin’s Creed III box, not even to stare at the disc art for a while as I wait for Gus Mastrapa to make his next move in Words With Friends.

I haven’t even read the booklet – is there a booklet? – which no doubt contains ever more thrilling tasks I can add to my boastful, quasi-patriotic talking points.

Each time I reach out to look at my copy of Assassin’s Creed III, I think of the countless hours I will waste doing insignificant things. Sure, in Hour 12, I may captain one of those naval vessels to victory. But a part of me fears that’ll only happen after 11 hours of picking the colonial equivalent of wild feverfew.

Still, in all greater aims, one must no doubt face the mundane. And I have explained again and again to the Girlfriend of the Year that I take these tasks quite seriously, seeing them as unique opportunities to right past wrongs within the Native American community and beyond. I have assured her, and others, that I fully understand the profundity of these responsibilities, ones not to be ventured upon lightly.

And again, I become exhausted. I’d rather spend two minutes trying to spell out some words on Scramble, or set up a few towers on GeoDefense – the stakes not nearly as high in either endeavor.

I tease myself with the thought that by traveling into the past and roaming through Colonial America, I may even run the risk of damaging the future irreparably. I have vowed not to do so, though I am convinced stepping on a particular butterfly, in a particular spot along my journey, will cause an epic chain of cosmic events culminating in the Girlfriend of the Year walking over to me right now, removing my empty orange juice carton from my desk and throwing it in the garbage for me. 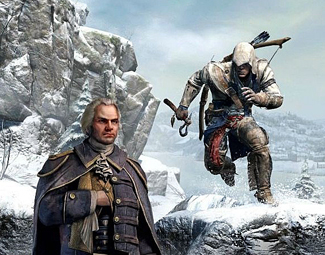 Sounds pretty awesome, right? You would think that goal, if nothing else, would spur me to action.

I try to cut the game into bite-sized chunks in my mind, but I know so little about it – I have never played any of what must be more than just two previous Assassin’s Creed games – that I can barely psych myself up. Perhaps the chance to slit a virtual George Washington’s throat – if the game lets you do that – and then shut off my Xbox before it saves could be enough to pique my interest.

Can one be arrested for threatening a long-dead president? Even if one is only doing it for a cheap, perverse thrill before immediately powering down?

It doesn’t matter, I guess. I’ll never even know which of our founding fathers are a part of the game, how many hours it takes to finally meet them, or even if it’s possible to side with Redcoats and fortify the realm of King George.

And each day that goes by, it seems less and less likely I’ll ever play it.