Mighty Morphin’ Power Rangers is one of the few TV shows in the ’90s that managed to become so ubiquitous, so iconic, that it transcended its medium to become a full pop culture phenomenon. By re-cutting Toei’s Koryu Sentai Zyuranger and filming new live-action sequences with American actors, Saban Brands took something foreign and exotic and introduced it to an audience that had never seen anything quite like it before. It was an instant hit and, even today, most people are at least somewhat familiar with the concept, even if they’ve never seen the show. 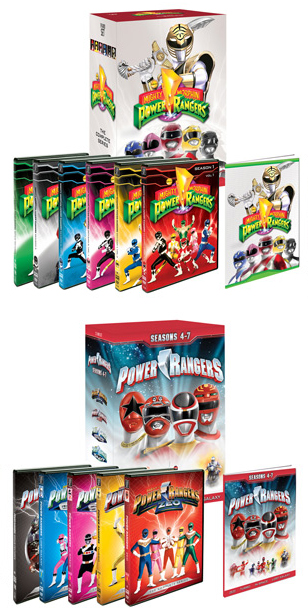 For collectors, complete seasons of Power Rangers have always been hard to come by, as many of the earlier series never saw full home media releases. Thankfully, just in time for the holidays and the show’s 20th anniversary, comes Power Rangers: From Mighty Morphin’ to Lost Galaxy, a complete and fairly robust Time Life DVD collection of the seven seasons that made up the entire ’90s run of the show.

But do you really need seven seasons of Power Rangers? That depends. Can you get past the ridiculous premise of an inter-dimensional wizard choosing five teenagers to wear spandex and use robots to fight ancient evil? Will you be able to cope with the incredibly formulaic makeup of each episode, where a problem is introduced, the big bad attacks, the Rangers repel and escalate as needed, and then everything is solved with a giant robot fighting a guy in a kaiju monster suit? How about the heavy-handed yet well-meaning moral lessons that saturate every episode? Are you liable to cringe from the preaching?

If this all sounds okay – even kitschy and fun – to you, then you’re going to love this collection.

Every episode, from Mighty Morphin’ Power Rangers right down to Power Rangers Lost Galaxy, is lovingly presented in its original form, with no noticeable edits or visual upgrades. This is the way we were meant to see the show, as a sometimes-grainy, nostalgic production, filled with terrible CG and sparks flying from everybody’s chests. A Blu-ray release may have been more pleasant to watch, but part of the allure of Power Rangers is in its vintage quality. It’s campy. It’s cheesy. It’s as glorious as I remember and, somehow, still relevant.

The first box holds the three seasons that made up Mighty Morphin’ Power Rangers. While reproduced faithfully, these seasons are an entertaining mess caused by Saban’s unwillingness to part with the original dinosaur-inspired costumes from the first season. The three seasons contain footage taken from three separate Super Sentai seasons, re-cut and pasted together with terrible writing. Plots holes and continuity errors abound here, and fans will love every minute of it.

The second box starts with Power Rangers Zeo and marks the beginning of Saban using only one Sentai season to produce one season of Power Rangers. The costumes are silly, but fresh, and the villain switch-up keeps things from going too stale. Power Rangers Turbo is next, and it’s here that the show starts to mature along with its audience. The Rangers are getting ready for college. Their mentor leaves suddenly, replaced by a cryptic sage who challenges the Rangers to solve their own problems for once. It’s hopeful, yet unsure, much like the pre-teens and junior high students who were facing their own life transitions at the time. However, it’s only partially unfamiliar territory. The monsters are still hilarious, giant robots still beat everything, and good always triumphs. Sort of. 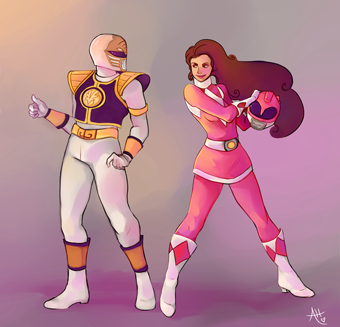 Turbo ends on a down note, with the Rangers losing their command center, making way for the jump to Power Rangers in Space. Here, things start to get a little more serious. The fate of the whole universe is at stake. Relationships start to bloom between good guys and baddies. Allegiances are questioned. People get seriously injured. Things are resolved by the series’ conclusion, and though it’s a bittersweet ending, it marks a logical end to the saga.

It’s understandable that a show this popular would keep going, so in the interest of keeping the ’90s legacy of the show intact, the second box also includes 1999’s Power Rangers Lost Galaxy, probably the most unique season on offer. A few characters from In Space make return appearances, but for the most part, this is a whole new gang in a new setting with a much darker villain. Multiple people die over the course of the show and, for the first time, a Ranger’s helmet will break. It’s a departure from the very first season’s lighthearted antics, and probably the most watchable season in the collection, both from a storytelling and visual standpoint.

For students of popular culture and fans of the show, the special features packed into both boxes are fairly interesting. Every featurette provides its own insight into the Power Rangers phenomenon. Cast interviews shed light on how the show was originally made and cut together, and the lost pilot episode gives a sense of just how far the show has come in the last 20 years. Even the hour-long White Ranger karate lesson and Christmas special are worth viewing, just to get a better look at exactly how deep into North American culture the Power Rangers were ingrained during the show’s peak popularity.

This is the kind of box set that die-hard fans will love. There’s nothing missing here, no glaring omissions or lost content, and it’s nice to finally have a definitive, complete collection of the show’s beginnings in one place. It’s also a crash course in American children’s entertainment for budding pop culture enthusiasts, and for newer fans, a great primer to the series’ mythos. You definitely need to have some interest in campy action to warrant a purchase like this, but if you do, it’s a no-brainer.

Power Rangers: From Mighty Morphin’ to Lost Galaxy is only available at www.powerrangersondvd.com for an MSRP of $219.95 USD. Review copy provided by Time Life. Illustrations by Amber Harris.

If You’re Not Watching Ash vs Evil Dead, You’re Doing It Wrong

Perfect Bid: The Contestant Who Knew Too Much
Previous Post