For the second time in less than a year, I have gotten married in a videogame.

Ysolda of Skyrim, meet Zooey the Barmaid of Fable II.

To both of you, I am an adventuring hero, known far and wide as loyal, trustworthy and strong, in one way or another the savior and protector of all things good and true. Ysolda, you might not know that I have the blood of a werewolf and am doomed to an afterlife of perpetual hunting, due to a curse from the Glenmoril witches (who, in fairness, I later killed, and whose heads I now keep in a bag). Zooey the Barmaid, you may be unaware of my choice to sacrifice thousands upon thousands of innocent souls so that you and our son could survive the great war – but I guess a little mystery is healthy in any romance.

Still, lest either of you think I prefer the other, let me count the ways in which I love you – and apologize, profusely, for the many wrongs I have done you both. 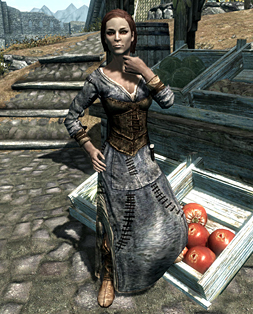 Ysolda, you cook me homemade meals and call me “My love.”

Zooey the Barmaid, you finally stopped verbally blasting me, at every opportunity, for luring your fellow townsfolk to their deaths so I could curry favor with a demonic cult.

Ysolda, you actually opened a shop and now hand me my share of the profits – 800 gold pieces the last time! – whenever I come home to Whiterun.

Zooey the Barmaid, you work at the tavern I bought in Oakfield and presumably draw a paycheck from me, in addition to what I pay in home repair and child care – leaving me with no discernible profit.

Still, while you, Ysolda, are clearly a sweeter talker, a more productive breadwinner and are much, much better looking…

…you, Zooey the Barmaid, actually have sex with me.

Albeit with the lights off.

Ysolda, you don’t seem to mind that I actually first asked Aela the Huntress to marry me (while I was just testing out the Amulet of Mara) or that Lydia, who used to live in our house until I sent her off to join the Blades, and who would give her life and/or body in my service, could seriously kick your ass if she wanted to – and probably does want to.

Zooey the Barmaid, you don’t care that all the women in our village walk around with cartoon hearts over their heads and openly propose intercourse, sometimes right in front of you.

Neither of you seem to care that I spend hours, days, weeks, months and in one case years away from you, and not only in the pursuit of the worthiest of goals.

Ysolda, I have left you to collect bear pelts for another woman and to help a poor sod in Ivarstead get laid. Zooey the Barmaid, I have left you to have coma-induced dreams about my dead sister and hunt enchanted gnome statues that mock me until I fill them with arrows.

But that’s not the worst of it.

Ysolda, after you moved in with me, I broke into your old house and looted it. 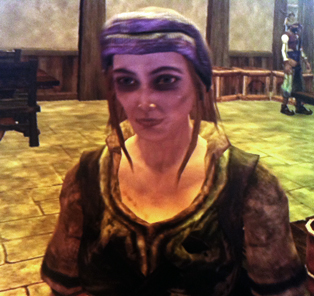 Zooey the Barmaid, I accidentally cast magic spells around you all the time, sometimes bringing creatures from beyond into our living room and scaring the ever-loving shit out of you.

Ysolda, I regularly come across priceless jewels and fast travel to the nearest trading post to sell them, instead of even trying to see if I can give them to you or at least use them to decorate our bedroom.

We had a blast.

Ysolda, you are enchanted by the nomadic Khajiit tradesmen and go on at length about them being a misunderstood people. I’m pretty sure I’ve randomly slaughtered at least two of them.

Zooey the Barmaid, I banged a prostitute.

For these and other wrongs: Ysolda, I am only level 26, so mathematically speaking I will have committed nearly twice as many heinous acts upon you and others by level 50; Zooey the Barmaid, I haven’t played Fable II in months and only dusted the cobwebs off and went to see you this week because I forgot your name, our son’s name (even though it’s my name) and the name of the town we live in, among many other bits and pieces, and needed to write a videogame column for Unwinnable.com – I, who use avatars that look nothing like me, or each other, and travel under assumed names, humbly beg your forgiveness.

And if that’s not enough, I leave you with this small admission, one that will no doubt send Zooey the Barmaid into yet another bout of her intolerable giggles:

Matt Marrone looks back longingly on the days where once you rescued the princess, the goddamn game was over. You can follow him on Twitter @thebigm.