In Red Dead Redemption, the build-up to crossing over from the United States to Mexico is tangible. Up to this point you’ve been confined to New Austin, the mythical 1911 region of south Texas that is your training ground. Like Grand Theft Auto, RDR funnels movement cleverly. The player is faced with a region that is expansive but just a slice of the broader world that is waiting to be populated on the large but empty map. The brilliance here is in the tease. A blank map waiting to be populated. A glimpse of the modern city of Blackwater in the opening cinematic. Each its own kind of frontier.

In order to live the “American Dream,” Marston must eschew the radical politics of his outlaw past and integrate himself into the expansionist genocidal project of turn-of-the-century America

When the time finally comes to explore Mexico, our hero, John Marston, procures a ferry and battles with dozens of Mexicans before arriving safely ashore. The game falls silent except for a song: José González’s stripped down “Far Away.” There’s something different about this song though; it’s a song you just don’t hear in videogames. Subtle and textural finger-picked guitar flows beneath delicate vocals packed in reverb. Ask most players about the game and this is the moment they’ll mention. And what function does it serve? The song punctuates the first and most significant border crossing of the game, a journey into foreign territory.

Along with this song and the game’s final twist, much of the larger discussion surrounding RDR focused on the beautiful landscape and the sublime sense of exploration it imbibed. But I want to take this sentiment even further. I think of RDR as meditation on the American politics of space and territory. With keen attentiveness to what the U.S. and Mexico border region landscape signifies historically and culturally, RDR reveals itself to be not only about exploration and the achievement of a pastoral individualistic ideal, but the human cost required to maintain that myth. The narrative and mechanics of the game work harmoniously to create a deeply spatial experience that engages with the genocidal foundations of frontier expansion in early 20th century United States. 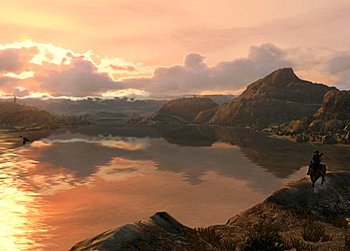 This thematic context is why RDR‘s most emotionally transcendent moment is not an explosive confrontation, chase or gunfight, but rather a peaceful border crossing. Transcendence is found in movement through space and across territories. In this moment, free movement feels transformative. It’s an all-too-brief window into a way of being that the landscape engenders but against which New Austin’s political powers are aligned.

Past Rockstar games were often spatially expansive, but closed in and territorial with boundaries abounding. Set in urban areas and embroiled in gangland dramas, traveling around any of the GTA games (excluding GTA IV) was a harrowing experience. Depending on your affiliations, you might be running or driving for your life. To aid this atmosphere of contested geography, architecture was clearly demarcated by ethnicity and class. RDR, however, is different. The landscape is open and there to be explored with comparatively little restriction. On the surface, RDR is less about territorial expansion than GTA. And this is definitely true in terms of mechanics. Marston is not part of a gang and is not conquering territory. There’s no turf war mini-game. What RDR does do, however, is signify territorial conflict. While the player is not meant to reconcile the logics of the game as a quest for territorial control, that is precisely what she is doing. The border crossing that serves as RDR‘s emotional apex evokes the same sentiments of exploration and manifest destiny that the entire game symbolizes through story and mechanics. Marston, a decent man searching for peace, is also an instrument for the desires of a nation whose existence depends on the colonial exercise of power and unhindered acquisition of property.

Marston is a pawn, and his debt is explicit. We know early on that Marston has been blackmailed by the U.S. government and must bring outlaws to justice. As time goes on we understand the complexities of this situation: the outlaws Marston hunts are his former associates and Marston’s family’s safety is dependent on his success. What makes Marston – and any number of similar reformed anti-heroes – such an interesting character is his difficulty coping with how the necessities of his mission compromise his moral code. He’s a reformed outlaw whose love for his family has brought clarity to the wrongs of his past. Ideally he’d retreat to his farm, as he had prior to the game’s diegesis, and stay out of trouble. But the blackmail forces him to be wicked and ruthless once again. So unlike the morally dubious or downright corrupt main characters of the GTA series, Marston politely refuses all offers from prostitutes, and rather than tempted with various kinds of mayhem he is incessantly solicited by people to help with abduction or theft. 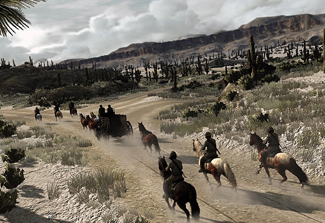 Marston’s moral code wavers throughout the game as he helps a woman tend to her ranch, and aids a vicious colonel’s suppression of a people’s revolution in Mexico (a rebellion that Marston sympathizes with and assists while he works for the colonel). In Mexico, Marston plays both sides doing whatever is necessary to secure his family. This individualistic philosophy, representative of the rugged individualism prized within the American mythos, is put to its most disturbing test in New Austin when the Bureau of Investigation tasks Marston with hunting down Dutch van der Linde, the leader of the outlaw group Marston ran away from. Dutch’s new crew is the 1911 Gang, composed of Native Americans disgruntled with the U.S. government’s exploitation of their people and land. It becomes clear that Marston’s individualistic ideology, one that fits with the honored traditions of the U.S., is precisely the morality that affords manipulation in the service of exploitative racist policies of expansion and white institutional privilege. In order to preserve his family, Marston, and the player, must commit heinous injustices. The problem is that Marston’s individualistic obsessions obfuscate the cross-cultural identification that could and should be made between Marston and the 1911 Gang, and could bring forth a poor and working class revolutionary force similar to the Mexican rebellion Marston participated in just prior to his return to New Austin.

Far from encouraging cross-cultural identification, RDR models the precise opposite. An ethnocentric and nationalist perspective on the Americas and territory. For instance, the areas the 1911 Gang natives inhabit, like Cochinay and Bearclaw, are partially explorable prior to their significance to the story. As is relatively standard within open world games that draw a lot of processing and memory resources, these areas are empty shells until they’re directly involved in scripted mission-based events. Apt players who stumble on them early understand they’ll return to these spaces later to find them inhabited. Beyond these practical explanations, there’s an interesting interpretive parallel to be made here to the perception of native ownership of the Americas. Since Western philosophy and governmental policy tied property ownership to capital improvement, tribes were not seen as having an appropriate claim to the land they inhabited. They existed on land but not “legally.” Within this context there’s an uncanny and certainly wholly unintentional historical and political resonance here. These empty spaces act as metaphors for a more generalized perspective of space and the ideology of the U.S. government and military who viewed Indians as squatters inadequately inhabiting the land as property. 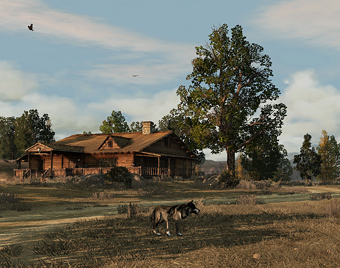 Interestingly, the same goes for Marston’s homestead. I assumed, perhaps like many, that we’d never see it in the game space. I imagined that if we were to encounter the Marston farm it would be in a cutscene. Yet, quite suddenly, when the second act comes to a close we come home. We find out the farm is called Beecher’s Hope and it, like the other notable landmarks of the game, was empty until now. I had ridden past it many times taking little note. Neither did Marston.

Here the game procedurally, and in a remarkably subtle and most certainly unintentional way, best makes its parallel between the exploitation of indigenous populations and that of all propertied individuals. Marston’s return home, and the reinstatement of his farm, brings the exploitative and damaging relationship between Marston and the federal government into relief. His way of life, one which is peaceful and loving as we learn through a series of relatively mundane farm-based missions, is conditional. It can be taken away at any moment. More importantly, Marston’s journey through the game demonstrates that not only is this life a condition of the government’s endorsement of his existence, but also his active participation in the doctrine of manifest destiny the BOI agents use him as an instrument of.

In order to live the “American Dream,” Marston must eschew the radical politics of his outlaw past and integrate himself into the expansionist genocidal project of turn-of-the-century America. Marston, the poor white landowner, and the 1911 Gang, the displaced outlaw natives, are manufactured as competing and conflicting segments, when they have common class affinities. Just as poor and working class whites used the labor movement to distance themselves politically from black slaves rather than solidifying the clear class affinities that existed, Marston does not recognize any political common ground with the natives.

RDR manages to construct a narrative and associated missions that engage with the politics of racial space, forcing the player into an uncomfortable complicity with immoral and genocidal violence. Just as Marston is blackmailed by the BOI, the player is compelled into violence by the game; the two processes are aligned. Marston’s ethical quandary between individual pleasure and collectivity is the player’s conflict between the fantasies of simulation and the ethics of playful violence. 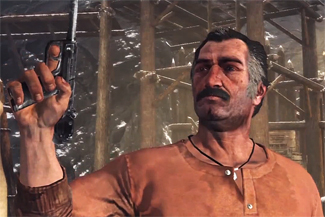 One of the final missions that the BOI requires of Marston is also one of the most disturbing. The player is positioned on the back of an armored automobile with a Gatling gun and must slaughter a large amount of charging natives in order to reach the 1911 Gang’s Cochinay stronghold. Compared to the overt narrative critique of racism embodied in the character of Professor Harold MacDougal, a racist anthropologist Marston encounters in Blackwater, the presence of race in Marston’s encounter with the 1911 Gang is relatively subtle. Rather than murdering natives out of explicit racism, Marston’s slaughter of them is due simply to his pursuit of the American Dream.

Racism is embedded in, and is the economic and philosophical foundation of, American expansionism. Interestingly, the mission and game downplay the questionable ethics of Marston’s activities, further layering the compulsory nature of ideology. We’re coaxed along with Marston, easily blinded by the game’s incessant hail. Unless the player is attentive to these insensitivities, she might not even recognize the colonial causes of Marston’s killing. RDR cleverly formulates a procedural system of meaning that mimics the dangers of individualistic white ideology that seeks its own profit at the expense of a properly expansive and compassionate worldview aware of, and proactively dismantling, structural racisms. We’re given no choice but to be complicit. As Dutch explains to Marston: “my boys here, they already lost their families a long time ago. We aren’t thieves, John, we’re fighting for something. A bit like you, only we’re fighting for an idea, not just for ourselves.”

While Dutch might be talking to Marston, he’s looking at us.

The Hero and the Horror