This past summer, Valiant Entertainment resurrected the Valiant comic properties of the ’90s. Harbinger, X-O Manowar, Bloodshot and Archer & Armstrong have all met with critical acclaim. Now it’s fall, and Valiant is expanding its line with one of their flagship characters: Shadowman.

To be honest, when I heard that Valiant was bringing back Shadowman, my first thought was, “I hope Aerosmith isn’t coming back with him.” For those unaware, one of Shadowman’s biggest selling comics featured an appearance by Steven Tyler and the whole Aerosmith gang. It was pretty terrible. I know, it’s an easy joke and I’m sure it’s been all over Twitter like outrage over Flash’s chin guard, but man alive, this book is vicious! 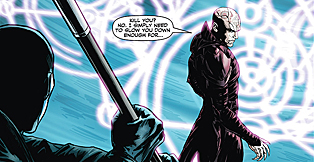 A comic book’s first issue is a lot like a TV pilot. It needs to introduce the protagonist, his or her world, a general premise, a supporting cast and some kind of nemesis. Superhero comics need one more element, though: the superhero needs to do something superheroic. Co-writers Justin Jordan and Patrick Zircher deliver the blood soaked goods in the first issue of Valiant’s Shadowman.

We don’t meet Jack Boniface right away. Instead, we meet his parents. His father, Josiah Boniface, is Shadowman at the start of the book and Helena LeBreton, Jack’s mother, wants no part of the superhero’s life. Right off the bat, Jordan and Zircher seed the conflict Jack will face. Patrick Zircher also serves as the comic’s artist. When Jack is introduced, Zircher’s artwork portrays a generally pleasant character. He’s a jack of all trades working at a New Orleans museum. An orphan, Jack hired a private investigator to look into his parents. What he finds disappoints him, and this sets off a chain of events that lead to him becoming Shadowman. Jack has no idea that his father was a hero, only that he was once accused of murder. Jack reminds me a lot of a ’70s Marvel hero. He exists in a world where superheroics and weird stuff already exist, and he’s pulled right into it.

Along the way, we meet supporting characters like Dox and his student, Alyssa. They have ties to New Orleans’ rich Voodoo history and are set up to be an asset to Jack and his tenure as Shadowman. I like Dox a lot. He’s a scrapper. The first time we meet him, he’s about to get overrun by a zombie. His reaction? “I hope you choke on me.” 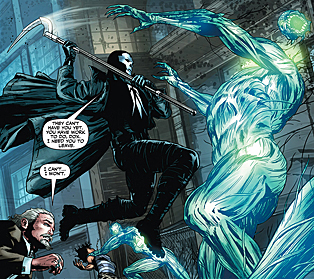 Shadowman #1 starts with the dead declaring war on the living. Before going to battle, Josiah gives Helena an amulet to protect the unborn Jack. He then becomes Shadowman and goes off to battle the comic’s big bad – Valiant’s evil necromancer, Master Darque. This scene is full of horror and superheroics, as Josiah cuts a path through the dead with his scythe. This showcases some of Shadowman’s powers and sets the tone of the rest of the series.

Twenty years later, a monster named Mr. Twist is loose in New Orleans, and it says the master is returning. Twist is a bloody mess of a monster that keeps up this book’s horror vibe. While Master Darque will most likely be Shadowman’s ultimate nemesis, Mr. Twist is a visceral and disturbing first foe for the new hero to face. Zircher’s art, combined with Brian Reber’s colors, doesn’t hold back on Twist’s gory design. Zircher’s panel layout is a blend of tight panels with low-angle shots and wide-open splashes to convey the massive threat to Jack Boniface and his city.

Shadowman #1 hits all the notes needed to make a successful first issue. The work dances the line between horror and superhero comics perfectly. There’s a lot of potential here, and I can’t wait to see what’s coming in the next issue.

@IanGonzales hopes you choke on him.