In lieu of a fresh Pretension +1 column, please accept this vintage piece of personal games writing originally published by Mike Benson’s ahead-of-its-time Robot Street Gang blog in 2002. I have been thinking about Mark lately and today seems as good a time as any to celebrate the lives of those who didn’t make it.

Mark would have loved State of Emergency. In an alternate universe, it is still 1987. I can see his stooped posture wrapped in a faded denim jacket. The garish light of a game cabinet casts a bloody hue on his dirty blonde curls. Over the arcade clamor I can hear his high-pitched cackle. The game’s Jello Biafra-impersonating emcee goads my friend to “smash the Corporation!” Mark gleefully complies, happily urging Sparky to smash glass storefronts with a dismembered looter’s head. I shuffle towards him in my faded Converses and slap a quarter onto the control panel. He turns towards me with a smirk on his face. “What do you want, homo?” I kick one of his feet out from under him, giving a corporate death squad the half-second they needed to jump Mark’s cholo avatar and issue him a nasty beat-down. “I got next,” I say.

State of Emergency would have fit in well next to Smash TV and Alien Syndrome, our favorite arcade titles of the late ’80s. Those games were fast-paced and simple, but most importantly, visceral – like a baseball bat pounding flesh. 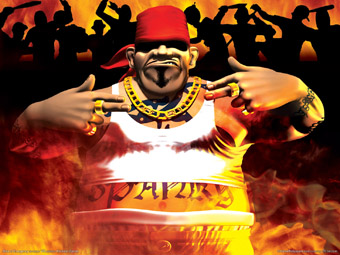 I remember Mark’s 1970 Mustang jerking to a halt, sliding for a moment on the gravel-strewn asphalt and kicking up a cloud of dust. Every lunch hour, we’d pack into his convertible and take a white-knuckle ride to the local food court where we’d gorge on pizza, cheap tacos and Chick-Fil-A. On the way back we’d arm ourselves with super-sized cups of ice as ammunition against other students. This day, our cups were near empty – we’d already run the gauntlet and crossed to the wrong side of the tracks that run along Dixie Highway to the neighborhood where our beleaguered high school dwelled. Something in the road had caught Mark’s eye. He jumped out without opening the car door and strode toward the trunk. He disappeared behind the lid and fumbled through the mess stowed in the back.

Megadeth crunched from the ride’s tinny speakers. The Florida heat caught up to us now that we weren’t in motion. We tapped the bottoms of our Styrofoam cups, looking for icy sustenance. Mark produced a well-worn baseball bat from the depths of his trunk. His fingers curled around the wood as he made his way to the misshapen lump in the middle of the road. “Ew, I think it’s a fish,” Dave said from my left. “It’s a big one too,” Chris added from the right. I rose from my position on the bitch hump to get a better look just as Mark’s first swing found its target. “Die, motherfucker!” Mark screamed. The fish’s head exploded into meaty, red mist.

Back on Earth(1), I’m launching grenades into storefronts, enjoying the moment of anticipation before the building explodes into a fireball, when I think of Mark and that bizarro-arcade where State of Emergency takes the shape and form the cosmos intended. My first instinct had been to play State of Emergency‘s Revolution mode, which follows a highly repetitive and narratively thin story line. The half-assed story, which unfolds in text, rather than cutscenes, held my attention for about half a second. The tiresome chores didn’t fare well either. Kaos mode was a bit more fun. This portion of the game handles much like Crazy Taxi. The longer I last, the more hectic things become. Mobs swell to unmanageable throngs. Civilians become harder to avoid. Pretty much every character on screen has their crosshairs on me. I’m oblivious to them. All that matters are my grenades and their lovely arc into the front doors of Corporation-owned businesses. The gut-level 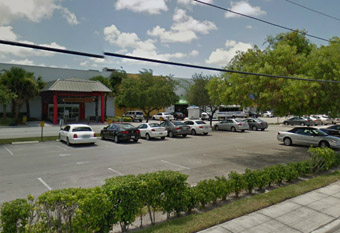 pleasure I’m feeling conjures memories of high school. From this angle, the game’s flaws mean little. It’s about blood lust. Rage, anger and frustration expressed through senseless violence. Another explosion rocks Chinatown. For a beautiful moment, body parts rain down around me. Then the crowd closes in, beating the last bits of life out of me. Still, I feel oddly sated. My hand instinctively reaches for my pants pocket and another quarter.

Mark was the first friend I made in high school. He was a metal head, the kind that hung out in the smoking section just off campus. I was a D&D-playing, Piers Anthony-reading dork, the kind that liked the library. I met Mark in freshman English. He and I became friends after learning of our mutual love for Mad Max. We’d spend the entire class period scribbling drawings of post-apocalyptic muscle cars outfitted with spikes and cow-catchers on the back of our vocab sheets.

On some weekends, I’d meet Mark at the Pompano Outlet Mall, a miserable, half-empty shopping center built across the street from a landfill. The mall was vast and worthless except for its movie theater (the first in South Florida to be THX certified), arcade and record store. Mark and I would rifle through cassettes, looking for thrash records to hold us off until Metallica finished …And Justice For All. We’d check out horror flicks at the theater. Mark and I tried to sneak into The Evil Dead 2, but got busted, so we saw Creepshow 2 instead. “Thanks for the ride, lady” – the mantra of the flick’s grotesque hit-and-run victim immediately became Mark’s catchphrase. The rest of the time we’d kill in the arcade.

Sometime during the summer of our senior year, Mark put a bullet in his head. Nice boys don’t kill themselves, right?

Alien Syndrome, Sega’s take on the James Cameron bug-hunt Aliens, was our favorite. We’d sink pocketfuls of quarters into the game. The thrill of tearing through otherworldly flesh with bullets or searing the goo with flame-throwers was unending. Side by side we’d rid room after room of bugs, then plow through the malformed boss creatures as if they were butter. During battle Mark would emulate Bill Paxton’s Private Hudson character, spouting bile as he mowed the creatures down. “You want some of this?” he’d ask rhetorically before letting loose a burst of fire. “C’mon cocksuckers. Come get some.” Mark reveled in clichéd death patter and laced it with as much profanity as he could muster.

My mom once overheard Mark’s vile language when coming to pick me up from the arcade. She stood behind us as we played. “Lick my balls,” Mark screamed as we finished off a mob of monsters. “Are you about ready to go?” my Mom asked from behind us. Mark’s face immediately bloomed crimson. We turned around, letting the rest of the game go down the drain. I introduced Mark, who politely offered his hand and told my Mom that it was nice to meet her. My mom didn’t chide Mark for his language. She shook his hand. We said good-bye. “He seems like a nice boy,” my mom later commented on the drive home.

Mark really was a nice boy. I still believe this, even though he didn’t look nice or sound nice. History doesn’t show him to be all that nice either. Sometime during the summer of our senior year, Mark put a bullet in his head. Nice boys don’t kill themselves, right? 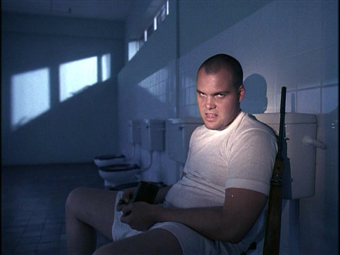 The last time I saw Mark was at an outdoor concert. Mark emerged from the sweaty, mullet-heavy crowd, panting and tired. Metallica’s equipment was being cleared from the stage. Mark had just lived through his first mosh pit. His expression was one of supreme satisfaction. His eyes peered from behind his brow, like Private Pyle in Full Metal Jacket. By the time the first fall school bell rang Mark was dead and buried.

As far as I know, Mark never hurt anyone but himself. Nevertheless, my mind can’t help but draw a line between my departed friend and the dozens of young loners who lash out violently against their classmates. As I sit here, wreaking havoc on digitized city streets with a virtual shotgun, I think about media violence and blame. I didn’t know Erik Harris or Dylan Klebold, but I knew Mark. There was something in him that needed out. I can’t say who put it there. In my heart I know this; Mark’s fascination with morbid metal, horror flicks and video games were a symptom, not the source of his woes.

In an alternate universe, it’s 2002 and I’m playing State of Emergency on my PS2. My phone rings. It’s Mark calling from Pompano Beach. I can hear Lars’s kick-drums from “One” playing in the background. I tell Mark that I’m playing State of Emergency. “I’ve heard of that one,” Mark admits, sipping the foam of the top of freshly opened Bud. “The wife says we shouldn’t buy it,” he pauses and chuckles. “It’s too violent for the kids.”