They’re the cheeky, knee-jerk reactions that fill out conversations with family back home–”you must eat a lot of cheesesteaks, huh?” For crying out loud, Uncle Dan. Of course, the real heartbeat of a city comes from its internal cliches. Dallas has a $20,000 millionaire problem. San Francisco hates the band Train. These are the low-hanging topics that tourists don’t pose next to for photos by the bay.

Seattle, my city of choice for the past five years, has its share of those, too. “Paul Allen owns half of the city.” “Everybody’s passive-aggressive.” And then there’s a curious one: our cinematic inferiority complex.

A video game developer in Spain? Microsoft works down the block, yet they couldn’t bother to pitch this Seattle-zombie game to a local.

Namely, a lot of movies and TV shows are set in or around Seattle…but they’re not filmed here. These movies want our cred, but they want Canadian kickbacks more.

50/50, Battle in Seattle, The Killing, and even a scene at the end of this year’s Mission Impossible enjoyed Vancouver and its filmmaker incentives and its non-union Canadian crews. Vancouver has forests and Pacific waters, too; just insert a Space Needle or a…Space Needle into an early scene, then set some other scenes in a coffee shop, and you’re fine, right?

No other big city could get away with that. Imagine someone taking a New York City film crew to Montreal; methinks they’d find Woody Allen waiting at the border with thugs.

Weirder still: for all its local geekery, Seattle stars in very few games. Perhaps our most famous offering is Shadowrun, the cyberpunk dice-and-paper RPG in which a post-apocalyptic Pacific Northwest exists mostly in your imagination. (You’re lucky if your DM can steer the party past the remains of an old Dick’s.) Otherwise, aside from Zack McCracken, the Seattle games list sucks. We don’t go around town throwing Skitchin’ nostlagia parties, for example.

That sucky list grew one bigger this summer with Deadlight, an Xbox Live zombie platformer produced by Microsoft. The description could make a hometowner hopeful: mid-’80s zombie invasion centered around the Puget Sound. You could use that phrase to describe Microsoft’s development of Windows 3.1. Slam dunk right there. 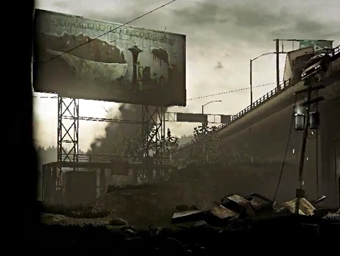 Upon booting the game, the developer’s name flashes: Tequila Works. Who is that, who is that, who is that… oh. A video game developer in Spain. Spain? Microsoft works down the block, yet they couldn’t even bother to pitch this Seattle-zombie game to a local. I’d even cut ’em slack if they dumped the project on some meth addicts in Spokane.

Instead, we have to trust some dirty Spaniards with the story of Randall, an admittedly local-looking lumberjack type with a penchant for hackneyed dialogue. Randall sees zomb – er, “shadows.” Randall runs. Repeat.

The game took critical licks for ho-hum puzzle platforming, and rightly so, but I hated it for an entirely different reason.

By the tenth minute, I was yelling at my TV about all of Deadlight‘s arbitrary local continuity concerns (ALCCs). Billboards in a city that doesn’t have billboards, thanks to state laws. A local newspaper with a fictitious name. A wrecked monorail train that conforms in no way to our city’s road grid. I might as well have been bitching to William Shatner about the number of vertebrae on a Klingon.

So what, right? But is it so hard to nail some of the bigger-picture atmosphere stuff? The first thing any Seattlite will laugh at in Deadlight is the weather. Yeah, yeah, it always rains here. But thunder and lighting are once-every-two-years phenomena in Seattle, and yet Deadlight‘s Seattle rumbles and crackles like a Great White concert. 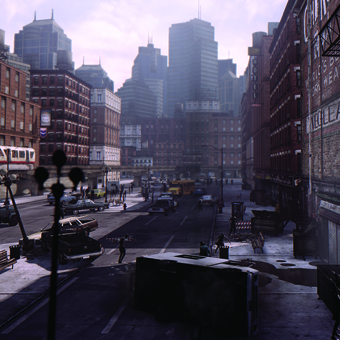 Worse is the underground lair maintained by a creepy dude named The Rat. Oh, we have that dude in Seattle. He rode the 15 the other day, and his hair smelled like poop. But his chunk of the game is a notoriously flimsy puzzle-platform section in the sewers.

What a blown opportunity for cool game design–Seattle actually has an underground city, destroyed in a massive fire over a century ago. Modern downtown Seattle is built on top of it; look down in sewer grates while walking around town, and you’ll see little red lights that light the underground way for paid tours and enterprising junkies.

Instead of capitalizing on a weird bit of Seattle history, Tequila Works copy+pastes a bunch of pipes and figuratively shouts, “Hey, low-rent Ninja Turtles!”

I suppose I can relate to Tequila Works’ plight. Maybe they did some research and realized what a bore a legit Seattle zombie sim would turn out. Between our hide-in-the-basement engineers, our ennui-ridden hipsters and our oblivious-to-all-calamity yuppies, you’d wind up with a pack of zombies walking around and hoping somebody – ANYBODY – would pay them some attention.

Hell, I’m starting to wonder if our maligned homeless population has already tragically set this idea in motion.

But even if Microsoft locals bothered to play consultant and send a few tips, most gamers would never have noticed. It’s not just that Deadlight rushes players too quickly past its relatively lush backdrops. Video games have to make their cities themselves a game mechanic, else they’re doomed to be ignored. Crazy Taxi will always feel like San Francisco, and Assassin’s Creed will always feel like the ancient, scalable Holy Land, whereas Left 4 Dead 2 will always feel like some random-ass swamp.

Sam Machkovech gets mighty ornery when people mess with his city. Watch him spit nails on Twitter @Machkovech.