A city is a monster. A city is alive. Its streets are its veins. Its buildings are its pores. Its people are its blood cells, flowing through it as they repair the body and fight with each other. Just as a single human being is a metropolis of organisms, so a city is a body of cells – ever changing, ever growing, ever dying.

It is rarely an organized growth. The city grows like a monster, with new limbs and carapaces and tentacles stretching out in all directions. As long as a city lives, it never stops growing.

Even as “Cities” tears itself apart, it is alive

A living city is constantly dying, too. The new towers are built on the foundational corpses of the old. Roads are dug up and laid down again. People die and are shed by the city; people are born and assimilated into it. A living city is a constant cycle of demolition and rebirth, creating a unique and monstrous and impossible city unlike any other. A city is a monster.

A living city never stops changing, never stops stretching its skyscraper fingers towards the sky or slithering its roads outwards or rearranging itself or pulling itself down. A dead city is static, unchanging. A skyline of skyscrapers devoid of cranes is like the glazed-over eyeballs of a corpse – unchanging and dead.

It’s why so many videogame cities seem so sterile, static and fake. They lack any depiction of this constant, monstrous change, this constant death and rebirth. Conversely, it is one of the main reasons that Grand Theft Auto IV’s Liberty City feels so powerfully alive. It has cranes. It has roadwork. Liberty City isn’t “finished.” A finished city is a dead city.

In Sound Shapes, the musical platformer by Queasy Games, each level is a song. The tokens the player collects, the creatures moving around the screen, the environment itself all contribute to a cacophony of noise that, somehow, always blends together into a song. Just like a city, each level of Sound Shapes is its own weird kind of life – all these components mixed together to create a song as ethereal as its corporeal components. You can get the idea of it, you can touch all of its individual components, but you can never quite touch the song itself. Focus on it too closely, and all you see are the bits. 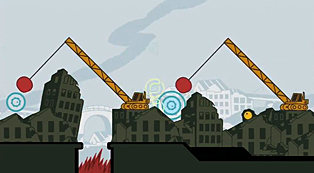 And then, of course, there is the level “Cities,” with music by Beck and artwork by Pyramid Attack. “Cities” is itself both a living dead city and a song you can’t quite locate. While the art depicts a city burning to the ground, bombed and engulfed in flames, that very city is throbbing with life and music. “Cities” is alive in a constant cycle of death and rebirth that gives it its own unique, monstrous life. Each skyscraper in the flames is itself a phoenix. There isn’t a song thread through this city; this city is a song. A song and a narrative of the death and rebirth every city undertakes ever moment of its life. Every city is a “Cities.”

In the first screen, as you commence your trek across the embattled city, the towers are all proud and upright, but the flames are already approaching, laying down a soft percussion. In the next screen, the fire-percussion has spread and the buildings are collapsing into each other. Among the flames, a still-functioning smoke stack pumps out a beat. And then, in the third screen, the missiles start to fall and bring with them the rhythm of guitars.

Even as the city starts to fall apart there are signs of new life. Beck’s whispered “Aaaaaaaaaah” gives the player safe passage across the flames. A pulsing antenna – spreading those newer, invisible networks across the skies and under the asphalt of modern cities – throws the player into the air like just another transmission, carried across city blocks like just another word.

And then the bombs begin to fall, slowly demolishing entire screens in xylophonic blasts, even as they break the song out of its soft intro and into the first verse proper. Even as “Cities” tears itself apart, it is alive. 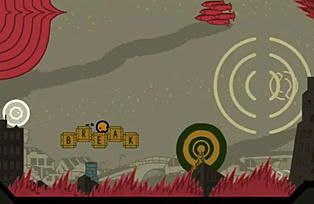 Past the destruction of the bombs – sinking entire city blocks into pits of flame and lava, Beck’s voice starts the first verse. The words emerge visible on the screen from giant speaker-like things. “There’s a hundred dead cities outside / Waiting for the night to come,” he croons. He is right. We are outside, jumping and rolling across them. This one city is a hundred dead cities.

But Beck’s own words bring the city back to life, even as the missiles continue to strum, as we jump across screens towards the chorus.

But then, even as Beck’s words shift the city back to life, the bombs begin to fall again, their destructive chimes taking us into the second verse (“You weren’t made for this world / But it’s not your fault / I don’t know if it’s all made up”) and beyond them into a missile/guitar breakdown.

All this time, we roll up and down and over skyscrapers and rooftops and cables, outlining a skyline with our movements. 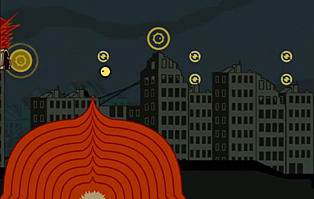 Past another chorus and through the end of the night, the demolition workers come with their wrecking balls at the break of dawn, bringing with them a faster beat. In the background, now, there are literal piles of skyscrapers under a baby-blue sky, dead cities of the night before, shed like just another skin for the city’s new life.

Finally, some uplifting strings bring about the song’s end on an optimistic high note, even as more screen-demolishing bombs begin to fall – “Cities” is tearing itself apart all over again even as it is reborn.

As the player crawls along “Cities,” outlining its skyline, he doesn’t just create a song, but constructs the narrative of a city, of “Cities,” of every city – a tale of constant destruction in the face of constant growth and life in the face of constant destruction. Without the fire and crumbling towers and rebuilt towers and demolition work and dawn and bombs and radio transmissions and cowering inhabitants and burning buses, the city would be dead. A static city is a dead city. “Cities” is exploding with life.

Brendan hurts a little every time he tweets and you aren’t there to read it @BRKeogh.

Having Your Coke (and Snorting It, Too!) – Saints Row the Third Reviewed