On a recent trip to Philadelphia, I was chatting up It Came from the Radio host Mark Torres about comics, and he turned me on to an indie crossover event that he was involved in called War of the Independents.

The main book, written by Scott Lobdell and Dave Ryan, was published in 2011 by Red Anvil Comics. Based on their comic Penance, War of the Independents finds Lobdell and Ryan’s characters traveling to other universes trying to gather heroes to help save their Earth. War of the Independents features characters ranging from Milk & Cheese to Madman, with Torres’ character Sunburst getting in on the action as well. Now, Torres is a part of another crossover with RZG Comics and their character, Phazer. Here’s what he had to say about the projects. 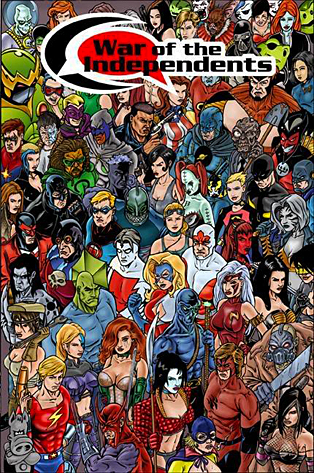 Unwinnable: The scope of this project is rather large for a company that isn’t one of the Big Two. How did you come across it, and how is it being received by comic fans?

Mark Torres: Well, this was a chain reaction of events. It all started when I was hosting another radio show called The Comic Book Novice, which focused more on comics and their creators. Through that show I met Peter Palmiotti (Jimmy’s brother), which led me to Red Anvil Comics creator Dave Ryan.

At the time, Dave was working on an idea to make a massive indie crossover book called War of the Independents, bringing together comic book characters from all walks of life, stretching from Gumby and Pokey all the way to Savage Dragon. Since I was also working on self-publishing a comic of my own, Dave asked me if he could use my character, Sunburst, in the crossover. I immediately said, “Hell yeah!”

A few years later, Dave got the six-issue series off the ground. Mariano Nicieza (Fabian’s brother) was working with RZG Comics, and he contacted me about having Sunburst appear in a set of trading cards that they were producing as a companion piece to WOTI. I said, “Hell yeah!”

Not too long after I submitted the artwork and character info for Sunburst, Mariano reached out to me again and asked if I would like her to crossover with his character and if I would like to co-write the script. By now, I’m sure you can figure out what I said (hint: “Hell yeah!”).

As for the feedback, everyone I have spoken to – and I even found a review of it online – tells me that they thought the story was good and fun. That’s all I can ask for!

Unwinnable: After meeting you in Philly and buying your book, I got really excited when I saw it on the shelf at my local shop. How surreal is it for you to walk into a comic shop and see your book side by side with the books you’ve grown up on?

M.T.: What store was that? I’ll give them a shout out on my show! But to answer your question, I can use one word: “Morphinominal!” (Yes, I went there). 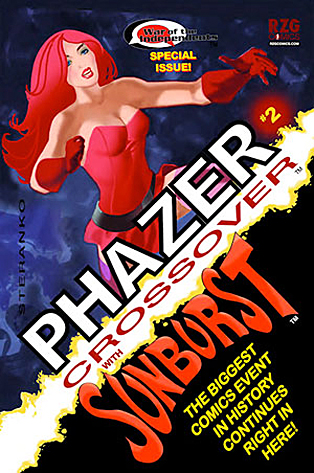 Unwinnable: What was it that brought you to comics? Is there a specific one that had you hooked to the point of saying to yourself, “This is it; this is what I want to do”?

M.T.: Actually, it is something that I always wanted to do. When I was a very young child I always said, “I want to work in comics.” Of course, I had no idea what that meant (writing, penciling, inking, etc.). I just wanted to create adventures for my favorite character, the Hulk.

Unwinnable: What’s next for the Sunburst? Going forward, are we going to be seeing more of this kind of event?

M.T.: Well, I know Mariano and RZG have Phazer crossing over with several other indie characters (after all, mine was issue #2). And Dave’s WOTI issue #5 will be the all-female issue where my character gets some screen time. Lastly, I am told that if my crossover sells well, Sunburst will get her own series. So to all the readers of this interview, go buy my book!

M.T.: First, I’d like to thank you for this opportunity. It is rare for me (who mostly interviews creators) to be interviewed myself. Second, to all you out there who want to work in comics: Keep pushing forward, network, ask questions and never give up on your dream. My final thought (lifting a quote from one of my co-hosts): “I hope this isn’t my final thought.”

Check out Mark Torres’ show, and pick up his book at RZGcomics.com or your local comic shop.

John McGuire can always be found on Twitter talking about the weirdness of travel @johnmiserable.