The following is the fourth in a series of journal entries chronicling the author’s descent into next-gen gaming degeneracy — from getting his first television in years to trying to figure out why the @$@”$)@ you need two goddamn directional pads just to walk down a fucking hallway.

When I was your age, I was perfectly happy to jump around on two-dimensional platforms, smash bricks with my head and save helpless princesses in 8-bit universes that were as harmless as they were fun. I couldn’t carjack flatbed trucks and tear through the (awesomely realistic) boroughs of New York City, listening to foul-mouthed, bile-spewing talk radio while rolling over pedestrians and engaging in furious, high-speed chases with police cars, only to leap from damaged vehicles as their engines explode into deadly fireballs.

I grew up in much simpler times.

I grew up in times when a sidekick meant a smaller hedgehog (actually an echidna, according to Wikipedia) named Knuckles, who if I recall correctly followed you around without comment (or much effect).

Nowadays, your sidekick is your asshole cousin Roman, who needs you to save him from loan sharks fucking him up on a basketball court in the projects, and asks you if your breath smells like tits after your date at the bowling alley with some chick named Michelle.

I grew up in times when the height of pixelized mischief was tossing a newspaper through a non-subscriber’s window. Now, walking up to a car stopped at a red light, dragging a woman from the front seat, punching the shit out of her and joyriding across town to ram through a police roadblock and die in a hail of gunfire is just something lighthearted you do to kill time between missions.

I even had a game, if you can believe this, called Frogger, where you tried to avoid getting hit by cars. In this latest game I’m playing, which you may have guessed by now is called Grand Theft Auto IV – and which I know is already old news to you young whippersnappers – not revving your engine, recklessly building up speed and crashing head-on into storefronts, oncoming traffic, and passersby, your body ultimately thrown through the windshield and landing with a thud on the pavement, seems like a waste of a perfectly good opportunity.

See that city employee raking leaves in the park? Why the hell wouldn’t you pull over (or launch your car over the guard rail), jog up to him – and smash your fists into his face?

In just my first few hours of playing GTA IV, I had already hijacked an ice cream truck, crashed it through a toll booth, raced it to a strip club and got arrested just before I could walk through the door. Even before I bribed the cops to let me out of jail and returned to get my first virtual lap dance – which ended, predictably, in a brawl with bouncers before more of New York’s Finest could arrive for the collar – I had already done more malevolent, reckless, sexist and just plain evil things than in my entire previous history of gaming, combined.

And that includes a game you’ve probably never heard of (because who cares or appreciates what happened yesterday, let alone 25 years ago?) called Leisure Suit Larry, which as a kid was as taboo and as titillating as I ever could imagine a videogame being, especially since I had to go to a friend’s house (walking uphill both ways) mostly just to watch him play this cartoony classic when his mom wasn’t looking. 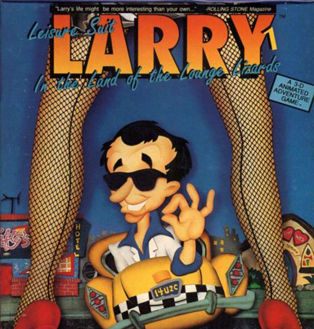 In the brave new world of GTA IV though, all bets seem to be off. I’ve only just begun, but I’m half-expecting to stumble upon a side quest where I am directed to hot-wire a hatchback, drive it to a realistic rendering of my friend’s house, beat virtual versions of his mom, dad and little sister to a pulp, steal Leisure Suit Larry, and play it as much as I want before pawning it to drug dealers or trading it for sex with prostitutes – all the while earning a host of achievements and launching my Xbox Live gamer score into the fucking stratosphere.

You really, truly, completely… have no idea how good you’ve got it.

Before Matt Marrone started this experiment, he thought he’d outgrown videogames. He never imagined he’d have to set up parental settings for himself. Follow the Rookie of the Year on Twitter @thebigm.

Rookie of the Year: Your Guide To Skyrim’s Civil War
Previous Post

Of Missed Tackles and Curveballs