The word “I” was never meant to be capitalized. There’s no grammatical reason for it and if culture teaches us anything, it’s to not be so damn self-absorbed. But there it is: the word “I,” standing arrogantly above all of the English language’s other personal pronouns. Its now-compulsory capitalization stems from corruption of the written word. At first it was only capitalized when it appeared as the first word of a sentence, just like any other word, but due to the frequency with which it was used to start sentences, we became used to seeing it always capitalized – so much so that it became habit to always capitalize the word, even when it was placed in the middle of sentences. It remained capitalized out of convention, and there it remains to this day, making us feel a little ever-so-slightly conceited each time it escapes our lips.

You better be the most interesting and brilliant person you can be, but you better not talk about it, damn you.

You’ll notice that I carefully avoided beginning this piece with the word “I”. Pretension is one of my biggest fears and I always wonder if my opinion, my input is unwarranted and unworthy. I’m terrified of focusing on myself, or appearing to be doing so. It’s considered an undesirable trait. “You’re so self-involved,” an ex-boyfriend said to me recently, bitingly. To mention myself, to make my feelings on a subject known, to place “I” before “you” in a sentence is considered an ugly, ugly thing.

It’s a criticism that the Magnetic Fields’ frontman Stephin Merritt seems to field often as well, something that makes the existence of an album called “i” – yes, lowercase, with a dot and all – rather uncomfortable for some to think about. “Pompous asshole,” said one disgusted reviewer.

And by all initial indications, there’s a patent lack of romance in the album, conceptually speaking. All songs begin with the letter “i”, if not the actual word. All fourteen tracks are arranged alphabetically, without regard for aural or lyrical progression. Even the lurking, incredible self-awareness of grammar – “So you’re brilliant, gorgeous and ampersand after ampersand,” Merritt sings in the second track – can be (and has been) mistaken for the reinforcement of a writer’s self-centeredness, as absorbed in his capacity for wordplay as he is in booze.

But after a few listens, you come to realize that it’s not himself that Merritt is singing about. He’s constructed other people, other stories to sing of. He shirks the vileness of self-absorption and instead finds prettiness in these other characters. All sorts of lovers live 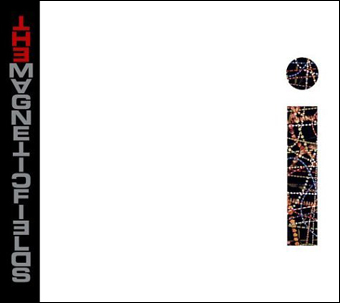 amongst the harpsichords and cheery guitars here, unrequited and jilted and trapped. A gay man wonders why his boyfriend has abandoned him to neediness and promiscuity. A clown drifts over town despondently, buoyed by balloons, as an alcoholic stares infinitely into the blackness of his drink. One track is unapologetically titled “I Wish I had an Evil Twin.”

These are all works of fiction, and yet I find myself cushioned here, relating to words and lines and that repeated use of “I.” I did similar things in my teens as I fumbled with what it meant to be somebody. You better be the most interesting and brilliant person you can be, I learned from others, but you better not talk about it, damn you. So instead, I splintered myself into characters, too. I was in turn a gamer, a hypochondriac, a party animal. I was willowy and full of life and bleak and wore the most colorful clothes I could find.

Listening and re-listening to Stephin Merritt’s numerous Is reveals to me that these are all his own characters, but they are all mine, too, all instantly relatable to me, just as my awkward nerd persona might be to anyone else. The word “i”, uncapitalized and crowned with a dot, adorns the album’s cover, standing strong and single, soft as a sigh. I slide the paper cover off the case and the word dissolves into one million of those brilliant, colored dots, arcing amongst each other, a thousand characters’ stories colliding and intertwining. They are all of us; we hide amongst them all.

Alan Moore Wraps Up the Century