GlitchHiker is a game that died.

Consider what it means for a game to die, because it doesn’t happen every day. Normally, everything except the game dies. Consoles die because they were cheaply manufactured for third-world wages. Mario dies because, well, he’s a video game character. One day the high scores will be wiped from the pinball machines at the bowling alley, but the machine will live on. Once in awhile, the save battery will go dead on an old game cart, or a disk is scratched to death. But short of an especially violent apocalypse, the only way I see that games will become extinct is if they are programmed to self-destruct.

GlitchHiker was not only a game you were playing, but also the princess in the castle you were trying to save.

GlitchHiker was a game that self-destructed. That is, it was about the game itself physically dying. It is kind of like when Woody Allen plays a director in his own films or how M. C. Escher’s illustrations are based on hyperbolic geometry. It might help to think of GlitchHiker as the video game version of HAL from 2001. A rule of logic has been broken, and you must venture into the mainframe.

The hardware trick was devised by the Dutch indie duo Vlambeer of Super Crate Box fame. Over two sleepless winter nights at the 2011 Global Game Jam in the Netherlands, Vlambeer and a few friends brought GlitchHiker to life. The general idea was that the game would become unstable as players lost, creating the illusion it was getting sick.

“We were kinda going meta-game,” co-developer Rami Ismail told me.

Just looking at GlitchHiker, you might not notice anything meta. It’s low-fi, with a little robotic character that dashes back and forth, dodging gray squares that fall in random patterns. It looks like it’s running on a badly damaged Game Boy Color. The graphics flicker with colored bars, scan lines and interference.

These errors weren’t the result of buggy code. Rather, GlitchHiker was supposed to malfunction. The glitches were programmed into the game. They would even hurt you. The point was to dodge the glitches. If your robot touched a glitch, you lost.

“We wanted to communicate that this game was dying,” Rami said.

And GlitchHiker was dying. The software had 100 credits, allowing it to be played 100 times. When the counter reached 0, the game was over for good. There was no restarting at level 1-1 and taking a different warp pipe. Death was for real. Once the game ran out of lives, the screen would give an error message saying that it was extinct. In other words, GlitchHiker was not only a game you were playing, but also the princess in the castle you were trying to save. 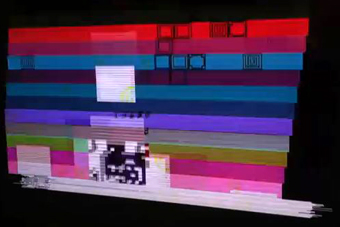 “We referred to it as houses in a world. You have the houses, which are specific instances of someone playing, and the world that would die slowly,” he said.

Rami was in charge of building the system that governed the rate of decay. Others worked out the details of the game design. The graphics were made so that they would progressively become more confusing as the game shed lives. Different versions of the soundtrack were recorded, which would gradually degrade from chiptune into radio static.

According to Rami, “It’s technically impossible to revive GlitchHiker. We protected the database with passwords, and every single one of us had to randomly type things on the keyboard.” Essentially, they locked up the code and threw away the key.

This is pretty crazy. Who slaves away for two straight days, cranking out a game that will only work for a handful of hours, especially when it could be made virtually everlasting with a few small tweaks? Games are typically built around theories of balance and fairness. GlitchHiker is the only game I know of that operated on principles of the absurd.

To hear Rami talk about it makes it sound like a religious experience. “It was like Woodstock. You just had to be there,” he told me. He explained how players experienced something like compassion when they won, and felt guilty when they lost. “It evoked empathy for a game,” he said. “It’s hard to explain how it feels when something that isn’t alive dies.” 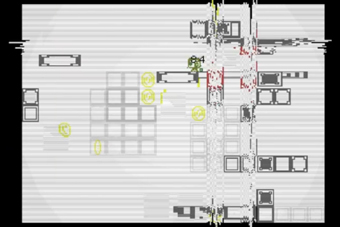 It’s easy to poke holes in Rami’s story. For one, you can still play GlitchHiker today. However, what I’ve come to realize is that GlitchHiker really is dead, or at least lobotomized. The win/loss conditions have been stripped – replaced with an ever-looping parade of dead pixels. The glitches no longer serve a purpose. They aren’t the erratic readouts of an AI’s life support system. While they are very pretty, they are just screwing up the game.

When I downloaded GlitchHiker from its website to try it for myself, I felt none of the emotions that Rami had described. Grabbing coins felt sort of pointless, like clicking a View-Master without the reels of faded red film inside. There is no room for wondering what lies on the other side of the visual spectrum. It is a little disheartening that I can’t seem to care about GlitchHiker – at least not in the way others cared about it.

Rami told me how the game died. “The team was sitting in a bar having a few drinks when we got a text message with a link to the website,” he said.

“We checked and it had three lives left. We were scared. Then, it was two. Then, one. We refreshed the screen every second. It was painful on a cell phone. We refreshed again and it was zero. All error messages. The entire table went silent. It was a really weird moment. After 30 seconds, someone said, ‘That was it.’”

Read more from Jason Johnson on his Tumblr.

There is No I before You