There is more to fall than just a bunch of colored leaves and shambling zombies. Take, for instance, Danzig.

Now some of you may think that the heavy metal crooner’s career has been a moldering corpse since 1992’s How the Gods Kill, but whether or not you think the magic left along with Rick Rubin, there is no disputing that the bulk of the music of New Jersey’s favorite satanic son is an integral part of the autumn season. His second band was named Samhain, for Pete’s sake.

Most years during the thick heat and humidity of late July, we will get one of those great evening thunderstorms that are all green light and ozone, the kind with gusty wind and rain lines that chase you into cover. They never last long, but they always leave a cool snap in the air that reminds me how much I look forward to the fall. Those nights, Danzig winds up on my stereo.

(What does this have to do with videogames? Nothing at all, though I do find myself wondering what Danzig plays. The obvious guesses are horror games Silent Hill or Dead Space but I bet he really likes games with ninjas in them. Call it a hunch. Glenn, are you reading this? Care to weigh in?) 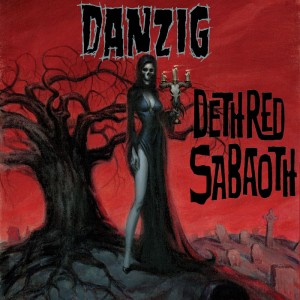 When I got home from vacation, my copy of the new Danzig record had finally arrived, just in time for the fall. Now, Deth Red Sabaoth has been out since June (I can’t help it – every time I type that title, it comes out as Red Dead Sabaoth first. Glenn should have done some co-marketing with Rockstar Games) but the limited edition took a few months longer to ship.

Now, getting a new Danzig album is, for me, always a big deal, regardless of the quality. In late September of my freshman year of high school, I got my first copies of The Misfits’ Collection I & II (on tape!) and they made quite the impression. It was fall, Halloween was right around the corner, these guys sang exclusively about the horror movies I had grown up loving (seriously, who else would write a song about The Return of the Fly?). Additionally, those two collections seemed to be standard issue to everyone in the school who was a little weird – it was simultaneously subversive and unifying – and one of a few times in my life that it seemed like a new door had opened.

So, a new Danzig album comes with a heavy dose of nostalgia. This one, as you might have already guessed, is no exception.

That this one is his best effort since Danzig IV is a happy surprise. Some of the songs are a little cheesy and the guitar tone takes some getting used to but hearing Danzig’s voice without it being buried under those weird industrial effects he’s been using since the curious Blackacidevil is well worth the very small missteps.

Of course, the limited edition itself (limited, of course, to an edition of 666 copies) is a bit of a puzzle. The package contained the standard release of the CD, the 7” single, the album poster (signed) and what can only be described as the official Danzig Urn.

I’m not sure what I was expecting from the picture on the website, but the porcelain-like (their description) box decorated with Danzig’s iconography leaves me flummoxed. The CD fits inside, inelegantly at that, but nothing else does. It is cool looking, but its lack of obvious purpose is at once extremely puzzling and amusing. I think I may wind up using it as the evilest flower pot in the world.

And that’s fine by me. For all his seriousness, I’ve always sensed a bit of the farcical buried deep under Danzig’s devil worshipping exterior. The Flowerpot of Doom, or whatever it is, definitely adds to that theory.

Even if I’m wrong, it’s still September, Halloween is right around the corner, and the music of Danzig and his imitators is about to be on heavy rotation at the Horvath Estate. All is right with the world.

So that’s my part of my play list for the next couple months. How about you, dear reader, what is on your soundtrack for the spookiest time of year? And, for that matter, what do you think Danzig’s favorite videogame is?

Totally Rad: ‘Back to the Future’ trilogy gets videogame-ified