In The League of Extraordinary Gentlemen: Century 2009, Alan Moore concludes his three-part tale of the Antichrist in the 20th century that began in Century: 1910. We check in with League members Orlando, Allan Quatermain and Mina Harker and see where this world of imagination-come-to-life is at. If things were dark in 1969, they’re pitch black 40 years later. London is now a dystopian city that Mina Harker (who has been in a mental institution for the last 40 years) compares to the Victorian London of her youth. Allan Quatermain is homeless and strung out on heroin, and Orlando killed a lot of people in Q’Mar while serving in the British military. Upon Orlando’s return to London, Prospero insists that she get as much of the remaining League together as she can, because the Antichrist is now an adult. 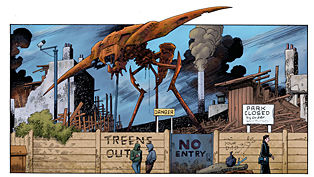 Now that I’m finished, I admit that I’m going to have to reread the other two volumes. Individually, this issue is an interesting read, but the density of Moore’s writing tends to require reference materials both within the series and outside, especially since this series spans multiple books over 13 years and references literature, religion and pop culture going back to the dawn of time. On its own, 2009 offers closure to a number of plotlines, and I don’t think anyone would complain if Moore ended the story here. While it seems like he still enjoys returning to this concept, after he made Mina and Allan immortals, he essentially switched the focus of the series to the world at large (although it has also provided some fine commentary on how being an immortal literary character can suck). As stated by Orlando, it’s easier for shallow people like him.

The Black Dossier on these books has felt like extra trips to this world, a broader landscape that the three League members are walking us through. I’ll admit that there are some fine character moments in 2009, but they’re overshadowed by an apocalyptic plot and the many references. In fact, there’s a great character moment that’s killed by an event that rivals in shock value a certain scene from Volume 2, which involves Mr. Hyde and the Invisible Man. Yes, Alan Moore can still bring the crazy. 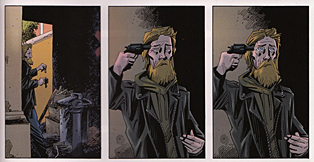 There’s also a bit of cranky old man Moore at work here, and although this book takes place in a fictional world, there is plenty of social commentary, as well as commentary on the state of literature and pop culture. There are also a lot of fun references to 30 Rock, Lost, 24 and even the excellent cult flick Fear of a Black Hat! While this stuff is fun and in the background, the big reveal is a bit on the nose. Fortunately, Moore manages to tell an entertaining story, and I would say his indulgences for the most part take a backseat in this volume. Whenever I think of creators getting too self-indulgent with their projects, I get nervous and flash back to the loony last couple of volumes of Cerebus, when Dave Sim used the comic as a soapbox to air his misogynistic and warped religious views. Sim also wrote entire issues about random people, like Woody Allen. While Moore has been close to that in the latter League books, his better instincts as a writer have come through.

As I wrote in my review for Century: 1969, if you’ve been taking this ride up until now, then I highly recommend this book. If you checked out after Volume 2 but now want more, then maybe tackle the Century books in one shot, and read the Wikipedia synopsis for Black Dossier. To be honest, I feel like the book reached a natural conclusion with Volume 2, and this subsequent material has been a nice bonus that added atmosphere and dimension to this imaginative pastiche of a world. Coming from a legend like Alan Moore, that’s quite a treat. Apparently, Moore has even mentioned that he would like to do some one-shots focusing on individual members from various iterations of the League, which would be fun supplemental material. Also, unlike a certain other project of Moore’s that is currently receiving the prequel and supplemental material treatment, I wouldn’t mind other creators exploring some of the backstory that Moore has established about the League. I’m content with what we’ve been given, but the beauty of these characters and the reason that they’ve been around for so long is that there is always room to reinterpret them.

There is No I before You