In Archie #627, the gang meets legendary rock band KISS. How has this not happened already?

Archie Andrews is a character that has existed in a continual loop of plotlines, not unlike the movie Groundhog Day, for 71 years. From time to time, though, the creative team will branch out and do something a little out there. The last wacky Archie crossover I can recall was in 1994, when he met the Punisher and, almost twenty years later, that still seems surreal. After a quick Google search, it appears that the Riverdale gang (as their superhero alter egos) teamed up with Barack Obama and Sarah Palin more recently. 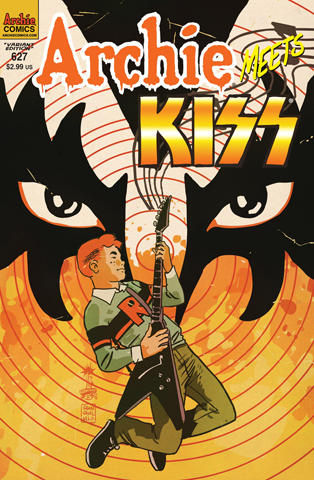 Now they’re meeting KISS, a band that is rapidly approaching its 40th year of existence. As KISS briefly appears and disappears over the course of the issue, the result can be summed up by Jughead’s first line, “Who were those guys?”

Issue #627 is the first of a four-part story and is all setup. Sabrina, the Teenage Witch, wants to cast a protection spell over Riverdale to ward off monsters and other supernatural things.  Veronica gets jealous, so she and Reggie look through her father’s library for a book of spells (Mr. Lodge dabbles in the occult?). They find a book that contains a projection spell which, ultimately, summons a monster gang. According to exposition delivered by Paul Stanley during the second brief KISS appearance, the monster gang wants to turn Riverdale into something resembling a boring party. KISS claims that they will find and stop the monsters but they do a crappy job – by the end of the issue, most of Riverdale are now blank-eyed zombie creatures. Did Gene get distracted by trying to pick up a group of women or something?

Since this is an Archie comic I can’t be too critical – obvious humor and colorful peppiness are the name of the game in Riverdale. That’s not a dig at writer Alex Segura or artist Dan Parent either, as the former throws some witty self-aware asides into the comic and the latter produces wonderful artwork consistently.

For a comic intended to deliver to an audience who “wanted the best,” though, we’re left wanting. While Paul and Gene have a couple of lines each, Peter Criss only gets an, “Outta my way!” and poor Ace Frehley gets nothing. Hopefully the next three issues spend more time with the personas of KISS, like the made-for-TV classic KISS Meets the Phantom of the Park. Gene breathes fire in the comic, so at least they got that right. Knowing that Paul Stanley and Gene Simmons are the prime members of KISS these days (and probably had some creative input), I bet Space Ace and the Catman will be sidelined through most of the story. I also doubt we’ll see Gene’s sleaziness surface since he’s a married man these days.

A lot of setup and an amusing cliffhanger hints at something more substantial in the issues to come, but as an issue on its own Archie #627 is more Dynasty than Destroyer, the album that features the song the title of this issue, “Riverdale Rock City,” is derived from. The next issue will be titled “Creatures of the Night,” so here’s hoping that issue is way better than the song and album of the same name.