Marvel has been pretty clear about its Ultimate Universe. It exists outside the normal 616 universe canon, and Marvel intends to keep things that way. But those lines are being blurred. In his comic, Spider-Men, Brian Michael Bendis teams up the traditional Peter Parker and the new Ultimate Spider-Man, Miles Morales. While I have issues with the major deus ex machina plot thread, Spider-Men is a great pairing of two great heroes illustrated by one of Marvel’s greatest artists ever.

The usual Bendis dialogue is present; a lot of back-and-forth banter occurs in this issue. But after Bendis has established the world for readers, he transports Peter Parker into the Ultimate Universe. The story is told strictly through Peter’s perspective, so when Miles finally appears, we feel as out of place as Peter does. The opening pages go far to establish the universe for readers, and I was curious if Bendis was going to pull any tricks and bring back Peter Parker of the Ultimate Universe. My only complaint is over the way Peter gets transported. When an author writes about a silly transition, I can’t help but feel gypped. I know Bendis had to find a way to get Peter to the Ultimate Universe, but a misfire triggered by a villain’s gun doesn’t seem like the best explanation. By the end of the issue, however, the complaint becomes minor, because by then readers don’t care how Peter got there – they just want to see what happens next. 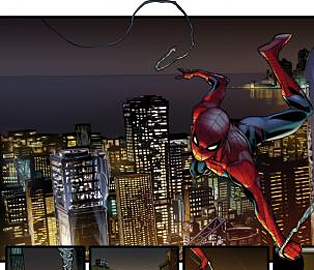 As for the art, there’s no other way to say it: Sara Pichelli’s illustrations are gorgeous. Her character drawings are tidy and flawless. The transition from the 616 to the Ultimate Universe is deftly communicated, and Pichelli has no problem making herself at home.
The moments between Peter and Mysterio are so wonderfully drawn that I felt cheated to not have more of them. Justin Ponsor adds the perfect colorization to the imagery, so that the eerie tone set by Mysterio’s presence is palpable to the reader. The illustrations have hints of Greg Land’s realism, but Pichelli includes enough comic book characteristics to give the images a layer of surrealism. When Peter Parker transitions to the Ultimate Universe, he’s drawn as if he’s melting through space. It’s hard to tell if this trick was done with a computer, or if Pichelli is that good. Every image in the comic is smooth and detailed, and not a single page feels wasted.

While I didn’t fully appreciate the story Bendis is trying to tell, I have faith in the end result. Even if the beginning feels a bit disingenuous, it’s not for lack of direction. I can get over an author’s need to “make things happen” if the result is a comic as strong as this one. I only hope Bendis and Pichelli can hold my interest for the rest of the series. 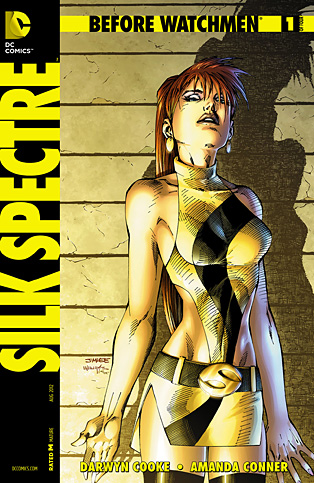 Ever felt pressured as a teenager? What if your mom was one of the greatest superheroes of all time? Silk Spectre explores these ideas in a comic that, while relying on previously released materials, gives new life to the character of Laurie Juspeczyk. Darwyn Cooke and Amanda Conner are able to craft a tale that is both tragic and humorous, as well as liberating. Plus, Amanda Conner’s art is a wonderful bonus.

If you thought you knew Laurie Juspeczyk’s angst before, wait until you read Silk Spectre. With a mother that holds her daughter to standards so high that she feels the need to attack her, readers can grasp the depths to which Sally Juspeczyk will go to make her daughter crime-ready as an adolescent. There are hints of Laurie’s future character (as seen in Watchmen), but they’re subtle. Cooke and Conner spend the majority of their time making Laurie a three-dimensional character who had the kind of upbringing you’d expect with a known action hero for a mother.

Amanda Conner has a style of art that is reminiscent of Archie comics. It has the same smooth structure, and it helps that some of the characters look similar to Archie’s crew. Most of Paul Mounts’ colors are slightly muted, and while his imagery appears polished, the majority of the images are shaded so that the book has a darker tone. More attention is paid to the construction of the panels here, and at times, the book looks like a shot-for-shot adaptation of Watchmen, albeit from a different perspective. The final page has the title of the book, as well as a quote from which it comes (as found in the original story). It’s clear Amanda Cooke is a Watchmen scholar, and she tries very hard to replicate the minutiae of the source material.

So far, I’ve been pretty impressed with the comics Before Watchmen has to offer. While I’m not fully sold on the project, I think DC should be proud of what they’ve produced. There’s a serious respect for Moore and Gibbons’ original work, as well as an attempt on the part of the authors and artists to be original, considering the predisposed nature of the characters. Laurie’s struggles are not surprising, but they are interesting. And the cliffhanger of the comic is interesting enough to draw me back in for a second issue. It’s not Watchmen, but it’s a fair shake at it. 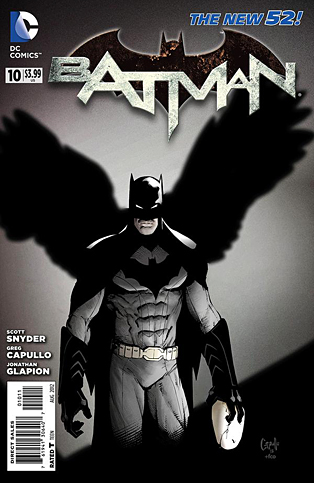 Bannen’s Book of the Week: Great mysteries always have great reveals. For a while now, fans have been wondering what Scott Snyder was up to with the “Court of Owls” storyline. We’ve seen Batman beaten to near death and have his home invaded, but now he has the opportunity for retribution. What he discovers is an alteration to the Batman mythos, but one that has significant reverberations.

The initial reveal in Batman #10 was a bit mind-boggling. I had to go back and reread the comic before I started this review, but isn’t that what every comic author wants? The Court of Owls had a reason for targeting the Wayne family, and here we find out why. I’ll spoil it for you all here, if you haven’t read it. The man behind the Owls claims to be Bruce Wayne’s brother, Thomas.

What Scott Snyder does is build to a moment where Batman has to face off against someone who has the same abilities as himself, but there’s an added layer of morality when it’s revealed who Bruce’s opponent is. The explanation isn’t too farfetched either, and while other writers have explored the possibility of the Waynes having another child, Snyder has found a way to make the buildup – and then the successive payoff – worth every read. There’s no gimmick here; all the pieces have been in place for a long while. Readers were just not adept enough to predict it.

I have to say that I did not see this coming. I figured the person in charge was someone who had a grudge against the Waynes, but after reading Gates of Gotham, I thought it was a deep-seated hatred for the family and not the planning of a madman. Even if Scott Snyder reveals Thomas Wayne Jr. as an impostor, the buildup will have been worth it. Continuously, Snyder has been churning out incredible Batman stories. He’s written a hero who is flawed and vulnerable, but also strong and imposing. Between Snyder’s writing and Greg Capullo’s art, fans have been treated to a darker Batman story, but one that has the ability to resonate for a long time. I, for one, cannot wait for the weeks when a new Batman comic is released. I have yet to be disappointed.