If there’s a comic book writer that one can look to for great stories, a writer who captures the voice of various time periods from an intertwined history that blends truth and fiction, presents a diverse plethora of characters, and has a penchant for squeezing in as much nudity and sexual situations as possible, then one may look no further than Alan Moore.

Although Moore is not writing as many comics as he was ten years ago, he is still dedicated to finishing the story he wishes to tell with The League of Extraordinary Gentlemen. In Century: 1969 he delivers on all of the aforementioned counts, with the added dose of “groovy” that a story taking place in the swinging London of 1969 requires. As always, Kevin O’Neill handles the art chores with aplomb, packing tons of color and detail into every panel. Understandably for this installment he also amps up the psychedelia, much like how the art in past installments has had an appropriately antiquated look.

The story begins with Basil Thomas, Brian Jones-ish guitarist with the Stones-ish band The Purple Orchestra, drugged out in his swimming pool. He’s murdered by a group of cloaked individuals, and it’s presumed that this is the doing of the satanic cult led by Oliver Haddo that was introduced in 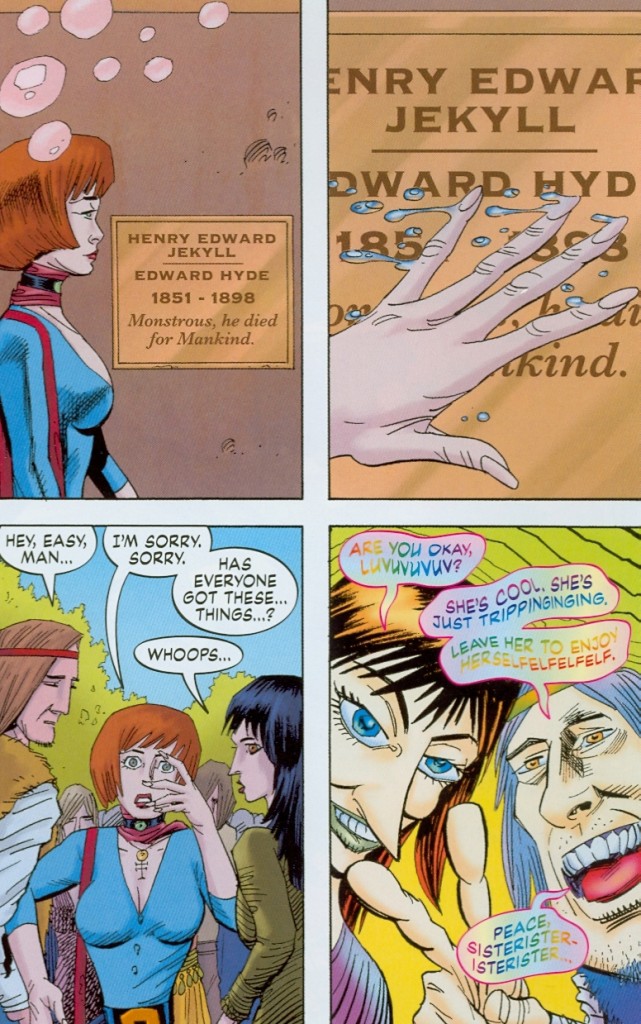 Century: 1910 (and mentioned in The Black Dossier hardcover). While Haddo is presumed dead, there is evidence that he’s still alive and running the organization. As a result Mina Harker and her teammates Orlando and Allan Quatermain return to England in Captain Janni Nemo’s Nautilus to find out what’s up.

Moore weaves a tale that is as dense as it is entertaining, although fortunately not as digressive as The Black Dossier, which I feel is the dividing point with many people and the League series (or maybe it was the shitty movie). That being said, this book will probably only require two to three reads to absorb the bulk of what is going on outside of the main plot. Characters pop up from the previous books, and the reader even gets a glimpse into how this world perceives the exploits of Leagues past, with statues and landmarks of heroes and villains popping up in random places. There are also other random Easter eggs for those up on ‘60s/’70s British pop culture, including mentions of #1 pop band (in this world) The Rutles! Can #2 band The Purple Orchestra compete, and is there an evil force that wants to possess their lead singer Terner? Stones fans and film buffs may remember that Mick Jagger played a character named Turner in the 1968 film Performance.

While all of this is going on there are moments of character development with the current three League members, oftentimes concerning the nature of immortality. While it is something that is strived for by some (and is the ultimate conflict of this story), in the case of Allan and Mina it’s beginning to take a mental toll and driving them both crazy. In the case of the ancient Orlando it’s just a fact of life that’s not quite as annoying as 20th century music.

If you’ve been patient and stayed on board with the series this long then I highly recommend this book. I will admit some of the characters that are basically ‘60s pop culture references flew right over my head and seem non-essential, except maybe the inclusion of Michael Caine as the hitman Carter from the awesome 1971 movie Get Carter. Moore also has this habit for inserting random freaky sex stuff into almost every scene in every panel. It’s like he’s saying, “I’m not affiliated with any of the major companies anymore, so I’m putting this stuff in because I can! A curse upon you all, after I light this cigarette.” At times it can be distracting, but I guess it makes some sense in the context of late 1960s counterculture. If you can see past this, then you will be greatly rewarded. There’s also a tantalizing glimpse of what may be the next (and supposedly final) installment of this series when during the story the mysterious recurring character Mr. Norton teleports to – 2009! OK, we all went through that two years ago, but in this universe and with Alan Moore writing it, you know it’s only vaguely going to be like any 2009 we’ve experienced, and I for one will be tagging along for the ride.