My wife and I like to go to Cape Cod at least once a summer, if we can. She grew up in Boston so, for her, riding with her family down to Wellfleet wasn’t much different than any of us who grew up in the NYC area going to Jones Beach, Coney Island, Long Branch or Asbury Park – it’s an opportunity to unwind and unplug from her stressful job as a social worker. For me, as technology has become more pervasive, the chance to unplug has gotten smaller and smaller, to the point that a friend of mine once e-mailed me while I was on vacation and opened with “If you’re checking your e-mail, and of course you are…”


No game console, no laptop…no problem?

I make fun of my wife for packing a lot of clothes that she’ll never wear on these trips, but one look in my laptop bag and you’ll see a similarly chaotic scene. Laptop. Charger. Tablet. Charger. Cell phone. Charger. Nintendo DS. Charger. Portable battery backup. Flash drives. USB cables. HDMI cables. HDMI adapters. The iPod Classic that’s been in its death throes since last spring. Since this is the bag that I use for work, and these are devices I also use at home, invariably at least one of those will be left at the office or house and that will be the thing I need or want most for the week. 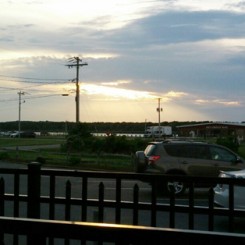 In an effort to pare down to the bare essentials, when my wife and I took off for Dennis, Massachusetts at the beginning of the month, I limited myself to two devices: my cell phone and my Android tablet. Those would be the only devices I would bring with me to the Cape. No game console, no laptop…no problem?

It went a lot better than I thought it would. The tablet, with its HDMI output, worked perfectly well as a media player with both preloaded movies (I finally finished Season 2 of Community) and streaming video from Netflix when the first few days of our trip were inundated with rain.

When we got bored with our selection of movies or couldn’t find anything on Netflix that we both wanted to see, I was able to log in to my home desktop, launch HandBrake to make Android-friendly versions of the movies I already had ripped to my hard drive, then pulled those files down via Dropbox. We were able to look up menus for local restaurants, find other indoor attractions and figure out when the rain would stop.

The tablet wasn’t built for sustained use, though – typing on a hard glass screen is tiring after a while, so I eventually put the tablet down and got outside, whether it was to grab a bite to eat, take the dog for a long walk or to sit outside when the weather finally decided to cooperate.

The phone, of course, helped me take vacation photos, upload them to Facebook and Instagram, navigate the winding roads of the Upper Cape, keep tabs on my colleagues at E3 (it too 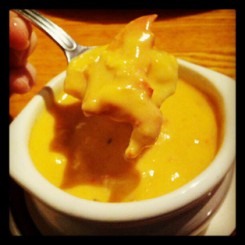 k me until I got home to understand all this talk of mechanical bulls), listen to music (such as a certain new album from a certain Canadian power trio) and, yes, check my e-mail.

Oddly enough, it was the phone that made me most miss having a laptop. My phone didn’t seem to like one of the (admittedly beta) features of my chosen ROM, and the backup I made beforehand failed, leaving me with a phone in an odd state of flux – it wasn’t bricked, but a lot of things didn’t work. I was able to reflash, but what would’ve taken me a few minutes to fix with a laptop took about an hour to do without.

And, while certain tasks could run in the background, like downloading new files from Dropbox while watching a movie, it would’ve been nice to have a larger device for multitasking purposes. If I wanted to look something up while we were watching something from the tablet, or read Ken Lucas’ latest #HoneyBadger tweet, I needed to do so with my phone. It was workable, but less than ideal.

I doubt I’ll ever be able to fully disconnect from technology while I’m on vacation, but now I know I can at least lighten the load in my backpack.

Feel free to ask @UnwinnableDonB anything at any time. Even while he’s having a quiet dinner with his wife. Seriously. She’s a very understanding woman.