I am a chicken. I’ve been a coward since I was a kid. Most of my adulthood has been spent building a life where I never find myself in situations that betray my yellow streak. That’s why I am a writer and not a pro skater, private detective or astronaut. My life is spent indoors at sea level far from the dangers of the world. As I reach middle age I sometimes try to broaden my horizons so I don’t get too old and too stuck in my ways. I acquired a taste for olives because no adult should be picky about food. But you won’t catch me jumping out of an airplane or anything stupid like that. I’ve got much smaller fish to fry. 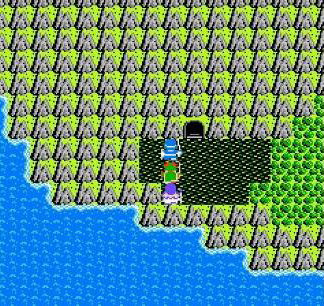 In videogames there’s always a cave. If you’re playing a JRPG it is just outside town and somebody’s significant other ventured into the place and never came back. There’s never any hesitation before plunging into that darkness. You never feel that panic in the back of your head as you take that tentative first step into the cavern. You just run in. The place is usually incredibly well lit and the monsters are always far off in the distance so you can engage them at will. That’s not what real caves are like.

Not long ago I found myself at the mouth of a abandoned mine head in Holcomb Valley, California. The entry to the cave was low to the ground, offering only four feet of clearance beneath a huge slab of stone that seemed (to me at least) precariously suspended in the surrounding earth. Two of my friends ducked into the dust, scraped under the rock and crawled into the small chamber beyond the opening. There wasn’t enough headroom in there to totally straighten your back. Or at least that’s what my friends told me. I didn’t go in. I made an attempt, but when I felt the weight of that huge rock over my back, I panicked. My friends, being very cool, didn’t rib me or even suggest that I was too scared to crawl into a stupid hole. I played the whole thing off like I was too lazy to be bothered, but I will always remember that moment as a minor failure – a moment where I traded experience for comfort, living for abiding.

I keep a sad journal of these moments in my mind. On my deathbed, I’ll crack the book open and read the pages, desperately wishing I’d done things differently. There’s the time, when I was five, that I ran terrified out of Space Mountain – unable to brave the space-age hallways leading up to the line for the roller coasters. And then there’s that time in middle school when our P.E. coach lined us up on top of the bleachers and forced us, one by one, to jump onto a big, puffy mat. I stood up there with my short shorts on with all of my classmates looking and couldn’t take the leap. Rather, I chose the walk of shame with tears burning hot in my eyes.

I would like to make good on these personal failures. It would be cool to find myself at the opening of a dark, creepy cave and just go in without fear or doubt in my mind. It would be nice to find myself on a precipice, just like I found myself in the game Xenoblade Chronicles recently, and fearlessly step out into the abyss. But I know myself too well. I’m not going to be cliff diving any time soon. 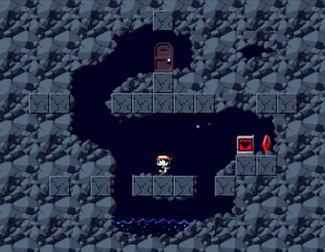 The rare days that I drag my ass to the gym, there’s always this stupid show playing on the TV screens in front of my favorite elliptical machine. When the Travel Channel isn’t showing cool stuff like Anthony Bourdain’s No Reservations and Bizarre Foods With Andrew Zimmern they air Ghost Adventures – a show about a couple of tools in MMA T-shirts who go into old buildings, turn all the lights out and pretend to hear voices. There is absolutely nothing scary about the show except for the fact that people like watching it. And yet, one episode really set my skin crawling. The brain-damaged Ghostbusters were in an old mine where it is said that Chinese workers were left to die. The opening to said mine was a small crack in the rock, mere feet wide. I am sure that my gut would prevent me from lowering myself into that godforsaken place, but this intrepid explorer, with his crusty hair gel, went down no problem. On his hands and knees, he crawled through a small earthen tunnel where he pretended to hear the ghost of a Chinese man tell him how many others had died down there. Talk about advanced – this guy did something terrifying so he could pretend to be scared by something silly.

There’s always a cave in videogames but they’re never cramped, they’re never narrow and they’re never scary. I’m glad the caves in videogames aren’t like that. I’ve had enough vicarious thrills like skateboarding, reckless driving and wanton murder in make-believe worlds. Those urges are totally satisfied. Let’s keep this one real. That way, the next time I’m standing in the daylight, looking into the cold, dark unknown, I’ll have that much more motivation to man up, pull out my pen and cross one more regret out of that stupid book.

Pretension +1 is a weekly column about the intersection of life, culture and videogames. Follow Gus Mastrapa on Twitter: @Triphibian.