I’m used to playing Xbox 360 games and hearing shouts and anger. People love to yell at their headsets during online matches, and, sure, I’ve let my television know when I didn’t like some solo games’ jumps and puzzles.

Fez has no interest in these angry gaming moments. Its conceit and aesthetic come together in nimble fashion to produce a frustration-free solo platformer, and the only “multiplayer” the game offers is a brilliant – perhaps unintentional – metagame. But before making sense of those qualities, consider that Fez actually has a weird, angry core, and that its underlying shouts and outbursts need to be addressed. 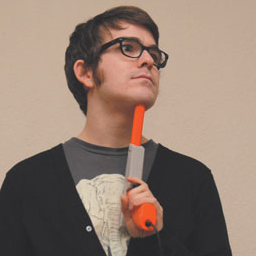 It’s hard not to hear them after seeing Indie Game: The Movie, the Sundance 2012 documentary that devotes a lot of its runtime to Fez creator Phil Fish. And, really, the treatment wasn’t kind. The filmmakers aimed their lenses at Fish’s twitchy, Fez-related meltdowns; aimed their boom mics at his profanity-strewn blasts against former collaborators, broken Fez previews and certainly himself. Even his moments of joy were painted with asterisks.

The film version of Fish is so one-sided, and so narrowly focused on his work, that he comes off almost as a victim of dramatization – the idiosyncratic crazy-man, played up for entertainment’s sake. Fez says otherwise. The game would work well as a bonus feature on Indie Game‘s DVD, as proof that this just might be the real Phil Fish – not to mention proof that the breakdown was worth it.

Frozen images of Fez tell half the story; the game is all blocks and pixelation, starring a blobby fellow named Gomez who hops and walks in search of collectible golden cubes. Once in motion, Gomez’s special power proves one higher than ol’ Mario: He can spin his 2D world in 90-degree chunks. The gimmick compares easily to other games—like Echochrome, Fez‘s shifts of perspective can turn thin blocks into long, useful bridges, and like Super Paper Mario, a semi-3D look at the world can reveal secrets.

But unlike those similar games, this isn’t the product of a team or collaboration. Fez‘s one-man ethos is instantly apparent in the opening town, its blocky chunks and colors placed with care and its characters sho 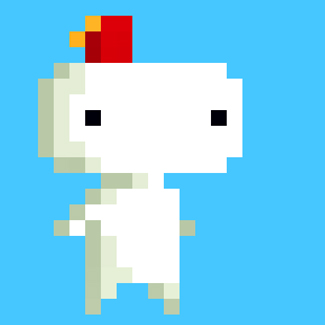 uting grammatically unstable nonsense. From there, every bit of Fez alternates between curious detail, suggestive clue and outright red herring. What is the point of this room with a throne in it? What about this entire rain-soaked future-city with nary a thing to collect or discover? How come this owl is telling me about a 64-bit heaven?

Some of Fez‘s puzzles hinge on very abstract hints and indicators, many of which are marked with the game’s mix of Tetris shapes and hieroglyphics. Other puzzles alternate between impossible set pieces and elaborate rooms that melt into disgustingly simple solutions. The game’s map is a messy criss-cross of rooms, paths, and secret passages; open a door while exploring a major room, and another even bigger puzzle space will open up, almost demanding a shout of, “Lemme finish that other one first, Fez!”

The game’s map and collectible screens look like abstract art diagrams cataloging Phil Fish’s insanity, and swimming through his game’s world can feel like breaking into a crazy Nintendo fanboy’s head, Inception-style. While playing, it’s easy to imagine Fish standing in the same room, hand on chin, grimacing at a player’s occasional frustration and muttering in French, “Why don’t you understand?” It’s also easy to imagine Fish freaking out about crashes and bugs, much like a key scene in Indie Game, as Fez, quite frankly, isn’t done. Though this review is subjective, only referencing a few critics’ playthroughs, each one I’ve heard about has been peppered with hard-locks and resets to the Xbox dashboard.

And yet, Fez is kind of brilliant.

How does that work?

Rarely does a game allow its creator to fall into a hole of personal despair and philosophical exasperation; even rarer still does such crazed inspiration produce something so colorful, seamless and balanced. For all of Fez‘s confusion and criss-crossing, none of that stuff ever gets in the way of its sheer platforming joy. No puzzle is hard because of a picky design decision to make a jump unnecessarily difficult. No room on the map is really all that hard to return to, thanks to plentiful warp-door placements, if a player wants to backtrack and try a weird puzzle again. 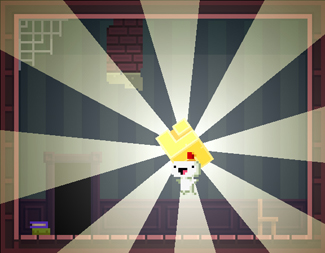 (The multiplayer “metagame” mentioned earlier, truly, is Fez’s throwback to an older gaming era when online FAQs didn’t exist and a game felt confusing simply because its players were younger than 12. After chatting with friends about Fez‘s tough points, I felt newly invigorated and began to understand some of the design intent behind the weirder content. Avoid all FAQs for as long as possible; you can reach the game’s first ending without them.)

With no bosses, foes, or lives, Fez settles into a comfortable, “wander and see what happens” mode. Bad jumps return players to where they started, rather than force them to climb all the way back up a tower. Turning the world 90 degrees at a time feels like a digital version of pushing through brush in a jungle – with each tap, something opens up. And with a forgiving 50% mark to “beat” the game, players really can walk past the weirdest content with little consequence, as if Fish meant to turn his brain into an enjoyable, scenic roadside attraction.

Of course, he didn’t mean for that. Fez tries to scare you away – tries to be the awful, angry man who puts up emotional walls to stay safe and isolated. But in the form of a video game, even Fish’s pettiest traits become intriguing and interactive, and by exploring his worst self through a bizarre tribute to classic videogames, Fish has made himself someone we want to play with.

Games are the Greatest Thing in the Entire Universe