It’s weird conducting an interview with someone while contending with a language barrier. Addressing you, your interview subject tends to look you in the eye. You stumble over the vocal sounds at their end of the conversation, paying attention to cues in their inflection, nodding or showing some sort of change in expression when you gauge it’s appropriate and they do the same. You’re both more or less adhering to an unspoken set of rules of social etiquette, even though neither one of you necessarily understands anything the other is saying.

You never really get used to it. 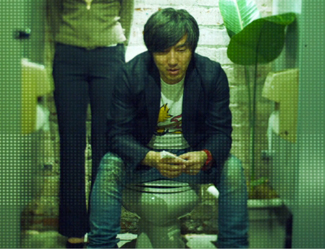 This happens to me when talking with Grasshopper Manufacture auteur Suda51 (also known in less numerical terms as Goichi Suda) at a press event for Lollipop Chainsaw during Game Developer’s Conference 2012 in San Francisco. The man is, I will confess, one of my personal heroes in the videogame industry. As anyone who personally knows me will tell you, I enjoy talking at length about his inscrutable design and bizarre flavor – I’ve been avidly following his work since being exposed to the on-rails sociopolitical psychobabble of Killer 7, which remains one of my favorite games. At this time I have recently completed an email interview with Suda about the philosophy behind Diabolical Pitch for a UK magazine, which I plan to use as an in to say hello, but also in hopes that he might put a face to my name.

The event space is decorated with a pre-college vibe: scrawled drawings of zombies and adolescent doodles on lined notebook paper adorn the walls around kiosks demoing a new Lollipop Chainsaw build. A row of blood-splattered lockers line the entrance, where you can get your picture taken with teenage undead and the model cosplaying as Juliet, the game’s busty lead. The zombies in the crowd are the probably the best part — letter jacket-wearing jocks serve trays of hors d’oeuvres with wet, torn jugulars hanging limply from ground-up throats while barely legal (and very cadaverous) nerd girls in crimson-stained stockings haunt corners of the room. The pink mood lighting lends a nice touch to the venue’s stripped-down interior, kind of a natural blend of Grasshopper’s punk rock style and Lollipop 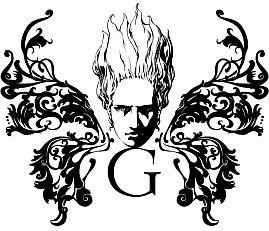 Chainsaw’s preppier sensibilities. During my interview session, Suda tells me he’s always wanted to do a game with a “high school panic” premise – I think the inspiration he mentions is Gakuryu Ishii’s 1978 film Koko Dai Panikku (literally “Panic High School”), which seems like it’s tailor-made to Suda’s taste.

Suda himself is dressed the part. He wears his usual blazer and designer jeans combo with a pair of ridiculous brown and gold sneakers that only those with a certain Japanese sartorial air (read: Japanese guys) can pull off. Everything about his style suggests a youthful affability, like he’s the kind of guy that would make for good company while getting trashed on cheap beer at the local dive. He’s enjoying himself here among the crowd, taking pictures with fans, hanging with his translator, chatting with friends and industry types. Nearby, Akira Yamaoka and Lollipop Chainsaw’s screenwriter James Gunn are mingling as well. The mood, as is often the case at these things, is boozy and relaxed. At one point, the back of the venue clears for Suda to introduce the event. At the end of his speech, he yells, “It’s party land!” Even now this is one of my favorite quotes by anyone in the industry.

Up until this point, my encounters with Suda have been limited to passing him by in hallways at industry events. I don’t know how much English he speaks (although judging by the translation process of my Diabolical interview, it’s not a lot). As much as I would enjoy casually chatting with him – I’ve had an idea that Grasshopper should tackle a surreal horror game based on the unsolved Glico-Morinaga crime case for a while now – the language difference is tough to overcome. Our initial exchange is brief, but it seems there’s a glint of recognition after his translator explains our recent interview. Sure enough, he smiles, nodding hello a couple of times when we pass each other in attempts to move through the increasingly bulging crowd. 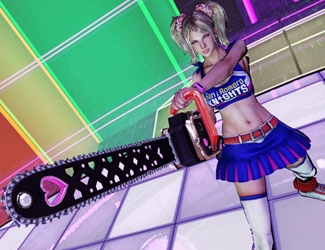 So, what about Lollipop Chainsaw, then? I liked the game the last time I played it. It’s like a cross between No More Heroes and Bayonetta (although admittedly not as complex or fluid as the latter). Juliet’s arsenal has thus far included a number of cheer-centric melee attacks, flips and, of course, that chainsaw that erupts with pink hearts and gore. (And now apparently the chainsaw is a gun?) It doesn’t necessarily do it for me this time around. The demo feels flat and, clocking in at around 45 minutes, is far too long. Wandering through a weird mixture of combat-heavy rooms and glitzy, in-glaring-need-of-polish arcade mini-game segments that ape Pac-Man and Elevator Action, I feel as though I’m going through the motions. It’s too easy to fall into a repetitive cycle of attacks (like Bayonetta, there are probably too many attacks to feel that comfortable in a demo setting) and the checkpoints in the old-school part are terrible. (Later, a fellow journalist will ask Suda for the inspiration behind Grasshopper’s often-retro aesthetic. His response is a somewhat glib “It’s our style.”)

I love the goofy, colorful look of the game and James Gunn’s writing is entertaining enough. Moments like when the severed head of Juliet’s boyfriend Nick (clipped to her waist like an oversized Tamagotchi) is inexplicably attached to a headless cheerleader’s body and made to perform a cheer dance are fun. I still leave the demo kiosk unmoved. With less than a day since getting confirmation for my interview with Suda, I had been hoping to come up with some questions from the demo. So much for that.

My interview takes place in a converted, graffiti-covered school bus outside the venue. Suda and his translator sit opposite us, a group of two or three other journalists. We get about 20 minutes to ask him questions. It doesn’t seem that any of us has had that much time to prepare, or maybe we were all were feeling similarly uninspired by the demo. Suda is mostly in softball mode – his “panic high school” answer is one of the most interesting of our short session. It’s not what I expected, maybe. Suda’s straightforward responses seem to run counteractive to his natural fun-loving personality. This is a bit disappointing, especially since in Japanese he seems to be having such an in-depth conversation when talking to you. Such as they are, here are a few highlights from the interview session: 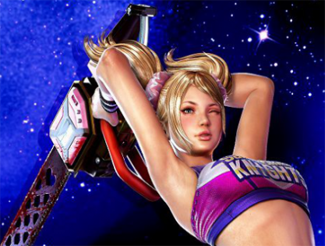 Unwinnable: Lollipop Chainsaw feels like it has a big punk influence, and obviously Grasshopper, with its “Punk’s Not Dead” slogan – it’s a big thing with your company. I’m wondering, in particular with this game, is it reflective of a personal life experience for you?

Suda51: When I get into these games, I get the same feeling as when I first listened to punk music. It gives me the same kind of thrill. That’s why I refer to it a lot.

Unwinnable: Can you talk a bit more about some of the other influences that contributed to the design of the game?

Suda51: I was influenced by one movie that starred Sean Penn? I can’t remember the name of it, but it’s a…

Suda51: Ahh. Yeah. That was one of the things that influenced me a lot. I wanted to create something like that.

Unwinnable: Why did you choose to work with James Gunn?

Suda51: To me, he is the resident of the zombie world, so by having him work on this, he just brought this game to another level. He made it a real zombie game.

Unwinnable: With zombies having such a presence in media today, what makes the undead in Lollipop Chainsaw different?

Suda51: I think that this game is like a non-scary zombie movie. I want everybody to play it with popcorn and pizza and cola, so the controller gets all sticky in their hands.

Unwinnable: If you could choose to adapt one existing property to a video game, what would it be?

Suda51: Ohh. Which movie? Which genre? Anything?

My final two cents is that I hope to see a Killer 7 sequel someday. Suda laughs. It doesn’t feel like a total wash and with Killer is Dead on its way, I’ll probably get more opportunities to have a real conversation in the future. Thanks, Suda. See you soon.

Steve Haske chronicles his disappointments and esoteric ramblings (among other things) on Twitter @afraidtomerge. Last year, Stu Horvath was also vaguely disappointed by Suda51. The questions asked above are from a group interview.