Goichi Suda, also known as Suda51, is one of only a handful of truly colorfully eccentric videogame developers working in the business today. His first exposure to game-making was a gig writing scenarios for the Super Fire Pro Wrestling games. Before that, he worked as an undertaker. From there, he has made a name for himself as a visionary storyteller creating ambitious games filled with a bizarre hodgepodge of pop culture references – games like killer7, No More Heroes and Flower, Sun and Rain. 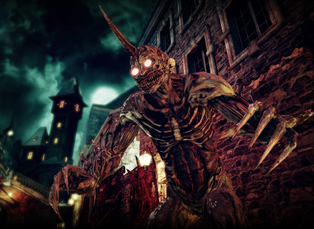 And, like many other big personalities in gaming (for example, Peter Molyneux or David Jaffe), Suda-san has a reputation for being a developer with big ideas who doesn’t always deliver on them. To correct that perception, he has enlisted the sage Shinji Mikami as a collaborator in Grasshopper Manufacture’s latest outing, Shadows of the Damned. The results look promising.

Shadows is a third-person action game that follows demon hunter Garcia Hotspur as he descends into Hell to rescue his girlfriend. Hell is extremely weird and Garcia is very, very rock n’ roll.

I recently had the opportunity to sit down with Suda-san and talk about Shadows of the Damned. As he approached, he saw the button on my lapel and smiled broadly. “Ahhhh, Morrissey! I love Morrissey!”

We were off to a good start…

Unwinnable: Tell me about Shadows of the Damned. What did you want to accomplish?

Unwinnable: What was your goal as a designer with the project? What were you looking to accomplish in terms of structure and game design – how does it differ from your previous work?

G.S: So for my company [Grasshopper Manufacture], this was to be our first HD game. We wanted to make Shadows of the Damned obviously high quality and also ultimately we wanted to make a new action game.

Unwinnable: What were some of the challenges you had to deal with working with HD and high-end graphics?

G.S: Because this is the first time, I’m working harder at it. I think staff members have a harder time than myself. I’ve spent several years using Unreal at our company but I don’t think it’s possible to get used to the engine.

Unwinnable: All of your previous games were very stylized, like No More Heroes. Were you working within the limitations of the hardware, or was that creative choice?

G.S: That was a creative decision, I always look for new ways to be inspired. I always make the style that will fit well with the story that I write.

Unwinnable: Shadows of the Damned has a very realistic style. What is behind that decision?

G.S: To begin with, the game was for HD and of course we wanted to make Hell as realistic as possible. If we did a very stylistic game, Hell wouldn’t be as terrifying as it should be. We wanted to create a believable Hell, a realistic Hell.

Unwinnable: Tell me about the game itself, in your own words – the plot or the setting or anything?

G.S: The main character, Garcia Hotspur, is a demon hunter. At the start of the game, he has basically annihilated all the demons in the human world. Because of that, his girlfriend is taken by the demons and dragged into Hell. So he tries to go to Hell to save her. 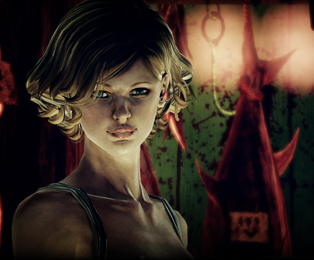 Unwinnable: Your games are known for having a lot of pop culture references. What are some of the things we can expect from SOTD?

G.S: I think I have so much imagery and influences in my visual style, it is hard to narrow it down. Robert Rodriguez is one of the main ones. I cannot reveal too much at this point, it would spoil the surprise, but there are a lot of fun things in there.

Shadows of the Damned, Suda51

Coffee Breaks Are Not a Meme is a Meme