In the second issue of her unique take on the mundane lives of superheroes’ better halves, Grace Randolph doles out a bit more characterization and mystery in her increasing popular series Supurbia. In an issue that is perfectly paced, Randolph gives enough face time to each character to make for solid execution in character development, as well as a climactic final page that seems to be leading towards an epic conclusion.

Where the last issue introduced the characters, Randolph uses this issue to flesh them out a bit more. We’re given quick but intertwined snippets of the characters’ lives over the course of the issue, yet the transitions between the scenes are seamless. In a 23-page comic, Randolph switches scenery nine times, yet at no point does the comic sputter. She is able to add depth to her established characters, even the quiet and brooding ones (like Sovereign). 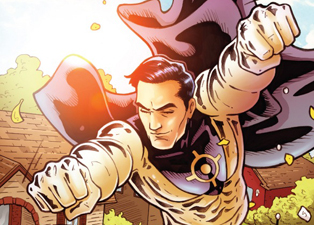 Speaking of Sovereign, I have a bad feeling about his character. He’s reminiscent of Mark Waid’s Alpha, a Superman-like hero who had a very dark side. I see Sovereign in the same light. He’s like a more menacing version of Don Draper from Mad Men – that is, if Don had superpowers. Even though he only appears on two pages of this book, he leaves such a strong impression that his importance to this story is not unnoticed, and this is another credit to Grace Randolph. She’s established her characters so perfectly that even in the small pages, their personalities come through clearly.

Additionally, Russell Dauterman’s art makes this book a visual joy. His clean, tight lines only accentuate the seemingly perfect lives these people lead. Everything is neat; the characters don’t have any extraneous shading and the majority of Gabriel Cassata’s colors are bright and engaging. Cassata really creates a dichotomy between the surface perfection and the truths hidden beneath the surface. This is expertly illustrated in the first two pages where Eve pulls back the sheets to reveal a bruised and bloody Robbie. He looks to be sleeping peacefully when the book opens, but the hidden truth is more disturbing than imagined.

Dauterman’s angular, cartoonish character designs, like those found in Humberto Ramos’ work, mute the darker aspects of the comic and make for a smoother read. If the comic had photorealistic stylings like those found in a Greg Land illustration, I think the story would lose some of its comedic aspects. Randolph and Dauterman are a perfect match for this book.

This is leading to a very exciting climax involving Mike’s return to action, Night Fox’s illicit romance, and Ruth’s dirty secret. I’m completely addicted to Supurbia, and if you’re not reading it, I urge you to jump on board. With the announcement that the series is becoming an ongoing title, now is the time to get hooked. I don’t think you’ll be disappointed. 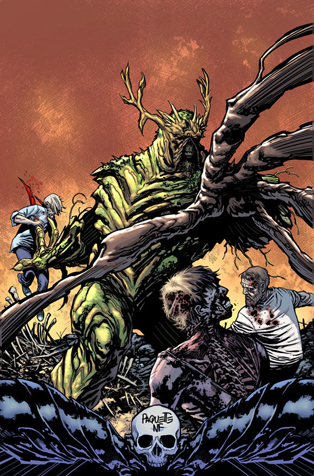 Scott Snyder is a master storyteller, and Swamp Thing is one more example of this. The book is wholly engaging and visually stunning. While I’m not completely in love with the new Swamp Thing character design, I must admit that it makes Alec Holland look like a real hero.

In this issue, Snyder finally shows readers the newly merged Alec Holland/Swamp Thing. Using Holland’s thoughts, Snyder takes readers through the transformation and we now have a Swamp Thing that is part human. No longer will he lumber through the woods like some variation of Frankenstein’s monster. We also get to see Alec’s thoughts, and much like seeing Bruce Wayne or Clark Kent out of costume, there’s a depth of humanity added to the character to make him more interesting.

The book is pure action and gore. Each page is layered with detail either aimed at advancing the story or enhancing the character. After being built up for so long, the reveal of the new Swamp Thing is masterfully done and there’s no doubt that he’s a true hero – and one that could rival DC’s mightiest. After reading this comic, it’s easy to image Swamp Thing as part of the Justice League (not that I’d want to see that, but where he used to operate in isolation, now his humanity makes him less of a loner).

That said, the only thing I don’t like about Swamp Thing is the horns on his head. I dig everything else about the redesign except this, and maybe it’s because the character loses some of its intensity with a pair of horns. This isn’t anything more than a minor grumble and it’s certainly not enough to lose any faith in Snyder or his ability to craft an excellent story.

Swamp Thing is a work of art. While Marco Rudy and Yanick Paquette create some beautiful images, the panel construction is so masterfully done that even the most detailed pages are easy to see. Both artists deserve a lot of credit for their efforts on this book. Their composition work is a lesson in how to include detail while not destroying the images with clutter. One page in particular is full of dead people, rotting animals, and red, black and green tones (thanks to Nathan Fairbairn’s masterful coloring) but the image never loses its precision.

Much of the comic is like this. The background details are overwhelmingly sharp, and while the artists depict mostly disturbing images, they’re still fun to look at. The rough-edged panel design elucidates the chaos of the comic and while the Swamp Thing was an emotionless creature, here he still has the thoughts and feeling of Alec Holland, so when Abigail Arcane reappears in her new form, readers can see the distress on Alec/Swamp Thing’s face. It’s heartbreaking.

This comic is continuously excellent. Snyder has shown true respect for a beloved property, while still paving his own way with the character. I’m so intrigued by Swamp Thing that I wish the book came out on a weekly basis because waiting a month in between is torture. 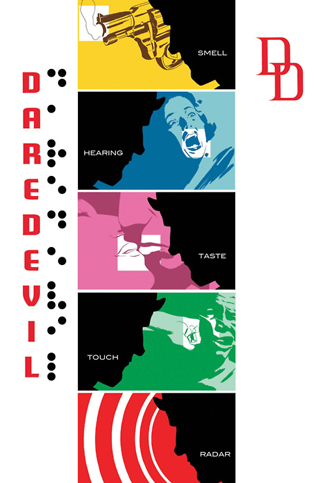 In a week of excellent comics, there was none greater than Mark Waid’s Daredevil. While the comic switches artists this week, its new artist, Khoi Pham, makes for some of the best action and humor to appear in this title to date.

Much of the story is told through flashback, and while it feels a bit out of place with the regular arc, it still ties some loose ends together nicely – particularly the final pages of the comic. They involve a gang that’s been trying to decide how to handle Daredevil, so he decides to confront them in an effort to force their hand. While no punches are thrown, the scene is charged with energy and full of humor. In fact, reading this issue is like reading an issue of Spider-Man. Matt Murdock is full of arrogance and wit, but above all else, he’s confident. Mark Waid spends the majority of this issue reinforcing the fact that while Matt Murdock may not be able to see, he isn’t blind. One thing Waid has done continuously is to show just how adept at being sightless our hero is. The way he compensates for his “disability” makes readers rethink what they know about Daredevil, and there’s no doubt in my mind that Matt is as powerful as the rest of the heroes in the Marvel Universe.

Unlike Paolo Rivera, Koi Pham is not as smooth in his designs, but his edgier lines and erratic composition help move the action along well. This is especially handy considering that the story we’re told by Matt’s client, Pyromania, is not the truth (as proved through Matt’s honest memories). While what we’re seeing is different than what is being said, Pham illustrates not only the truth of the situation, but Matt’s growing anxiety at both the lies his client is saying and the pressing need to get out of the room before the sub- and hyper-sonic sounds drive him nuts.

Javier Rodriguez’s colors really make the images come to life and with Pham’s rougher character designs, the final pages of the comic are a glorious treat for any comic fan. Not only does Rodriguez depict costumes well, but he’s also adept at coloring bruises and bleeding faces. Pyromania’s injuries (doled out by his lawyer) are painfully depicted. One can’t ignore Matt’s cocky smile either.

Daredevil is one more good story in a line of good stories, and Mark Waid should be celebrated for his work on this title. It’s humorous, full of action, and has great tales to tell. Before I picked up Waid’s Daredevil, I wouldn’t have considered myself a Daredevil fan. Now, however, I’m more than excited to grab my copy each month.