It was 9:15 in the morning, far earlier than I am generally awake, and I was running late. I was supposed to be at the First Presbyterian Church of Arlington to help finish setting up Geek Flea 3 at 9:00 a.m. My phone rang – it was probably my partner in crime, John “Hambone” McGuire, calling to find out where the hell I was. I answered and said hello, bracing for a scolding.

“Hey, dude. Just so you know, Mark Mariano‘s car is on fire right in front of the church. The fire department has the street blocked off at Kearny Ave., so you are going to have to come around the back way.” 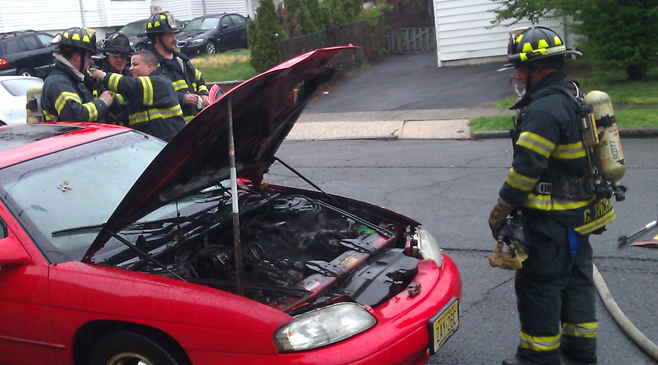 In a million years, I never would have thought that this is how Geek Flea 3 would start off.

For some reason, the engine block in Mark’s car decided that the morning of the flea was the perfect time to melt. Despite the loss of his car, the fire wasn’t serious (though it was smelly), no one was hurt and all of Mark’s merch was undamaged.

The rest of the show was a lot less Escape from New York, but still a ton of fun. We had hundreds of people visit the show. We made new friends and hung out with old friends.  Vendors sold their wares and the collectors added to their collections (where else would I find both the Murder She Wrote board game and a vintage pachinko machine but Geek Flea?). SpongeBob showed up. Many baked goods were eaten. After the show, we all soldiered over to the Loop to get drunk and shout along to the rock of Hambone and Friends. Dave Trainer flew through the air. Amy the bartender tried to kill Hambone. Brine and Bastards reformed for fifteen minutes. It was epic. We have since resolved to sacrifice a car at the start of every future Geek Flea.

Endless thanks are in order: Team Unwinnable (particularly the core trio who makes Geek Flea run: John McGuire, George Collazo and Chuck Moran),  all our vendors, all our sponsors (80sTees.com, Loop Lounge, Comic Explosion, Barcade Jersey City, Tail Slate, Paradox Comics), the church and the church ladies who are always so gracious to host us, the DJs who kept the tunes flowing all day (DJ Victrola, Brian Malloy, Ant Menuti, John Dispirito, Freddy Hernandez), Shawn Orr for lending us the sound system, Brian Taylor for coming all the way from Pittsburgh to lift heavy things and open doors, Jim Quigley and Big Kev’s Geek Stuff for giving us huge shout-outs, and anyone who showed up, told someone about the show or supported us. We’ll see you all again in November!