Growing up, I was more a fan of the robot apocalypse than, say, the zombie or ape variety. The 1980s and early 1990s were a time for Terminator 2: Judgment Day, Mega Man and Transformers. Demiurge’s Shoot Many Robots is a callback to those times. 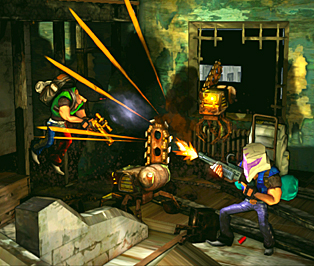 The game is a four-player co-op, run-and-gun shooter for XBLA, PSN and PC. A 2D sidescroller, it evokes classics like Metal Slug, Zombies Ate My Neighbors and The Simpsons. The main character, P. Walter Tugnut, travels around in his RV, stockpiling machine guns, rocket launchers, tutus and anything else that can help him fend off the murderous machines that plague the landscape, just like a hillbilly Magnus, Robot Fighter.

Some reviews noted that Shoot Many Robots is a little light on story and they’re absolutely right. While a lot of the gaming community is talking about Mass Effect 3 and about stories as an incentive for gameplaying, Demiurge took it old school. Using a leveling system and loot drops, the developers built a game that’s reminiscent of quarter pumpers like Contra, Double Dragon and P.O.W. It’s a simple premise: Robots are attacking, so P. Walter Tugnut has to go shoot many robots. Classic!

Demiurge is not trying to reinvent the wheel any more than the developers of contemporary arcade style co-ops Castle Crashers and Scott Pilgrim: The Game were. They set out to make a damn fun run-and-gun shooter and they did just that. The best arcade games, new and old, are able to pull the player into a world based on the game mechanics alone. That’s what’s so fun about Shoot Many Robots. Well, that and the hillbilly tropes.

The game has all the redneck trappings – guns, beer, trucks and a messy RV. The aesthetic reminds me of the Kevin Costner/Elijah Wood white trash melodrama, The War – only with psychotic killer robots instead of mullet-headed kids chasing each other through garbage. 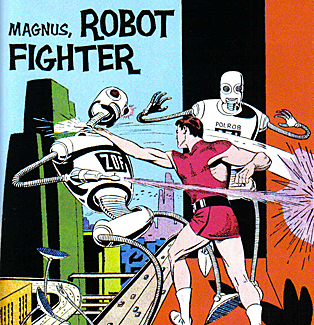 The game is hard, sometimes infuriatingly so, but that is part of the charm. It evokes the days of the classic arcade, where kids would spend an entire afternoon pumping quarters just to beat a hundred Shredder clones. I’ve spent a lot of time in the Quick Match feature, running around and blasting Choppers, Hot Rods and Tankbots. I dabbled with the single player mode and it is fun, but the leveling system is a lot stronger in multiplayer mode. Players get more points and level up faster when playing with a group. And the more points you get, the cooler your gear.

Instead of potions or magic mushrooms, players have three beers. In multiplayer, your fellow players can revive you, too. It’s like a night out at the bar. You know, the night where you and your friends run into a bunch of meatheads and have to put them in their place? It doesn’t end the same way though. In Shoot Many Robots, you and your pals can take down the Tankbots and then go party in your RV.

There’s been a lot of talk in popular culture regarding the zombie apocalypse. I suppose with a show like The Walking Dead being a massive hit, it’s only natural. However, the robot apocalypse still meanders in and out of our collective pop culture subconscious and Shoot Many Robots keeps that apocalyptic vision alive – at least until your hillbilly ass gets too drunk to punch the red missiles. If you miss the heyday of arcade beat ‘em ups and run and guns, and you have a healthy hatred of machines, Shoot Many Robots will be right up your alley.

Ian Gonzales once traveled back in time to kill Kevin Costner before he could make The Postman. Unfortunately, he could not obtain a phased plasma rifle. Read about his failed mission on Twitter @IanGonzales.