After having John Stewart protect the secrets of the Green Lantern Corps by killing his fellow Lantern, Kirrt, I expected Peter J. Tomasi to fire off a great story about John’s overwhelming guilt and the deception he uses to keep others from knowing the truth. Green Lantern Corps, however, takes a hard right into “sapsville” and delivers a poor epilogue to what was a strong introductory arc. 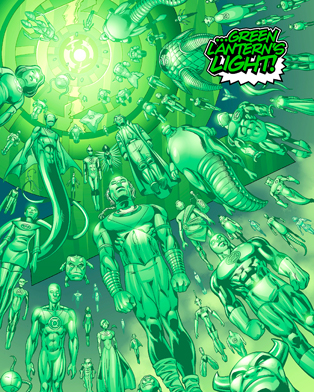 John spends this issue taking Kirrt’s body back to its homeworld. While Guy Gardner delivers some pretty cool justifications for his actions in the previous issues, his appearance derails what is meant to be a spiritual journey for John, one during which he can reflect upon his actions. His scene feels out of place, especially considering that the guardians appear to know all the facts surrounding the battle. So one would assume that they know about John killing another Lantern. This conflict is never broached, and Tomasi leaves the reader wondering just how the guardians can be so knowledgeable, yet so ignorant.

When John arrives on Kirrt’s planet, his family obviously mourns, but it’s when Kirrt’s younger brother starts his sob-fest that things get bad. Not willing to accept the fact that his brother’s dead, Birrt steals his brother’s body and sobs over it in a canyon. I get that the scene is supposed to be emotional, but it comes across as silly. I couldn’t tell if Birrt was so full of sorrow or mentally handicapped to the point where he didn’t know his brother was dead.

The final scenes are a mountain of cheese, especially the epitaph John carves into Kirrt’s grave. I won’t go into detail besides saying it deals with being a good brother.

Claude St. Aubin’s art is weak compared to other GL artists. Never have I seen a universe inhabited by so many humanoids. Normally a Green Lantern comic is an eclectic mix of races. Here, everyone looks like some variation of John. There are a few alien characters, but nothing as varied as those found in an Ivan Reis or Doug Mahnke-illustrated book.

After such a strong issue last month, this was a bit of a bust. I’m not convinced that Tomasi is completely done with this story, but this issue makes it feel pretty final, which is bothersome considering the conflict that could be developed over the course of the series. I have hope John’s not done with Kirrt’s death, but the next outing better be more engaging. With all the emotions possible, Tomasi utilizes a small portion of them. I’d prefer to see John wrestle with this for a long while. Then, at least, the payoff will feel satisfactory. 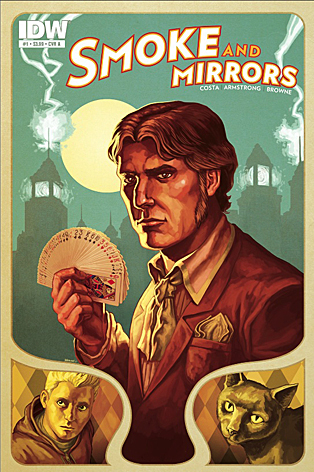 For a new comic, Smoke and Mirrors expects a lot out of its audience. This isn’t a bad thing, but definitely an unexpected move. So is Smoke and Mirrors worth the buy? Not immediately – but I think it will be in the long run.

Built upon the premise that magic is real, Smoke and Mirrors tells the story of Ethan Vernon, a snotty teenager whose quick mouth and curiosity get him into trouble. The comic opens with a pretty hefty exposition that explains how magic appears on the Earth, and how a company called The Trade Circle is going to help utilize that magic around the world. There’s more going on here than I can detect, and I’m sure this character, identified as Mr. Carroll, is going to play a larger role at some point.

But the story switches narratives to Ethan quickly and then the rest of the comic is about him. His personality makes him immediately unlikeable, and while I was intrigued by the payoff at the end of the issue, Ethan is so off-putting that I could care less about him. He’s the cliché of every spoiled child, and this makes relating to him difficult. His father is dead and his mother has about given up on him, so he fits the mold of a child caught in a depressive spiral. But I don’t know if Ethan is meant to be a good guy or a villain, and this kind of ambiguity makes for a strange read, one where you want to keep the character at arm’s length.

The most interesting person is the Tobin Street magician. He doesn’t practice magic, only sleight of hand. And in a world of true magic, this makes him an anomaly – and therefore the most fascinating character in a book full of stereotypes.

Unfortunately, Ryan Browne’s art doesn’t work for me in this comic. His thick inking makes the comic visually flat. It also muddles up the character emotions as some of the faces looks so asymmetrical, especially those from a distance, that it’s hard to tell if a person is sad, apathetic, or angry. The action scenes suffer from the same design flaw. The electricity lines of certain crystals and the protective auras of other magicians look so quickly designed that they’re more squiggles than actual depictions.

I would have preferred cleaner pencils like those found on Fiona Staples’ cover. Her illustrations of Ethan and the magician are much more appealing than Browne’s. Because of his designs, the colors don’t come off as well. When a crystal is meant to radiate light, the dark shading Browne puts around the object makes it look like the light is closing in on it.

Save for the art, I’m intrigued by Smoke and Mirrors. I liked how Mike Costa dropped readers into a magical world and left it up to us to figure out what was going on. At no point in the beginning did I expect the characters to exist in a world so different from ours, and my surprise felt genuine.

I look forward to seeing how events play out in a world where magic is real, even if the main character is so unlikeable. 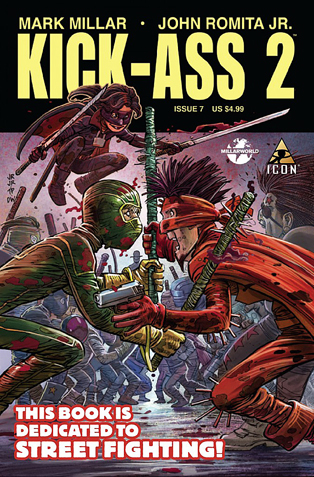 Bannen’s Book of the Week: If there’s one book Mark Millar consistently writes well, it’s Kick-Ass. Finishing off his second series, Millar delivers a hell of a knockout punch that leaves me desperate for more.

Dave Lizewski has faced his toughest challenges in this arc. Now an established hero, he’s been part of a superhero alliance (like the Justice League), worked on establishing himself as a friend of the police and dealt with the death of his father at the hands of Red Mist. This issue handles the resolution of all those conflicts perfectly. Filled with painfully visceral violence, Millar walks us through a massive battle in the middle of Times Square. Hit Girl’s fight with Mother Russia is the best part of this scene, and it ends in typical Millar fashion – which means lots of pain and blood.

In this issue, Millar does some of his best characterization of the entire series. Once the police show up, Kick-Ass and Red Mist are forced to retreat into a building to get away and here is where the comic is split between resolving the situation through fighting, and depicting the characters realistically. Red Mist, for example, breaks up the fighting to plead with Kick-Ass to take a break for a while so they can at least get away from the police. It’s a logical argument, and one which I found myself buying. Also, Dave’s character has never been more perfectly on display. He’s vengeful but logical, and the realization of his actions catches up with him quickly enough that he’s ruined by the end of the comic.

As for the art, this book was made for John Romita Jr. His blocky character designs help sell the violence as each punch and kick reverberates in the panel. Since the beginning of this comic takes place in Times Square, Romita has a ton of people to depict. The detail that goes into this is phenomenal, and while I never really noticed the intricate precision of his pencils, Romita’s best work is on display here. Seeing the characters bruised, bloodied and swollen only adds depth to the violence of the situation. Dean White and Michael Kelleher perfectly color the book, and Tom Palmer’s inks and finishes capture and display the tone, seamlessly keeping the emotional flow throughout the book.

While Kick-Ass 2 upped the ante, its scope will pale in comparison to Kick-Ass 3. The final pages help solidify the conflict for the next book, and the stakes are raised to unbelievable heights. This is impressive work, and a series that comic fans should make sure to own.

Alone Together in Journey