It’s in the flickering neon and the dark shadows that Deus Ex: Human Revolution comes alive.

The year is 2027. Megacorporations are as powerful as some governments. National armies have been privatized. Media coverage is omnipresent. The world, thanks to incredible advances in cybernetics, is on the precipice – but whether it is the brink of a new Renaissance or a slide into chaos comes down to a heady mix of moral and ethical decisions you have to make in your role as Adam Jensen.

Jensen is an ex-cop and the head of security for Sarif Industries, a major player in the development of human augmentation. When a violent act of corporate espionage leaves him near death, company scientists heavily augment him to save his life. Once he recovers, he must use his newfound powers to find the people responsible for the attack – an investigation that will lead him into a web of deadly conspiracies.

You agonize. You doubt. You choose. There is no telling what the ripple effect may be by the end of the game.

A stealth-based first-person shooter, Human Revolution is a worthy heir to the heritage of the original Deus Ex. Like its predecessor, freedom is the overriding game mechanic, allowing you to tackle most scenarios in a variety of ways, from brute force to stealth to diplomacy and more, in any combination, according to your preferences at the moment.

There are some minor technical shortcomings in Human Revolution. The aiming tends to get finicky in the heat of battle. The enemy AI is also a touch dumb. In an open firefight, your foes are ruthless and efficient – it only takes a few bullets to put Jensen down. But when taking the stealthy approach they turn into the Three Stooges.

At one hilarious point, I was hiding under a desk and a security guard armed with a heavy machine gun was standing directly in front of me, unloading into the office chair that stood between us. When his clip was empty, despite the fact the he should have been able to see me clearly, he decided, unbelievably, that I must have gotten away somehow, and proceeded to stalk off.

The real genius of the game is the world it creates. The team at Eidos Montreal obviously has great admiration for Blade Runner, Neuromancer and other pillars of science fiction noir, but it was also content not to rehash those classics. Human Revolution is not a pastiche.

The philosophical conundrum at the forefront of the game, namely, redefining the concept of being human in the wake of rampant mechanical augmentation, creates a very realistic narrative playground. Being the debate of the moment, talk of cybernetics is everywhere (in newscasts, the conversations of passersby, in book and magazines), allowing questions and opinions to unfold organically. And, unlike most RPGs, once you have to act on your beliefs, there is no handy karma meter to let you know, numerically, where you stand. You agonize. You doubt. You choose. There is no telling what the ripple effect may be by the end of the game.

Awash in golden light, this world feels right, a distinct possibility – future real. The augmentation debate is valid even now, as technology creeps further and further into our daily lives. Grunge and glitz are in evidence in equal portions, and the streets and alleyways are a balance of sleek futuristic innovation and the brick and wood of the past. The cities of Human Revolution feel like they have history that stretches back longer than a decade of brushed aluminum.

When the story of Human Revolution, with its overtones of enlightenment and undertones of Greek tragedy, coalesces with the environment and atmosphere it isn’t science. 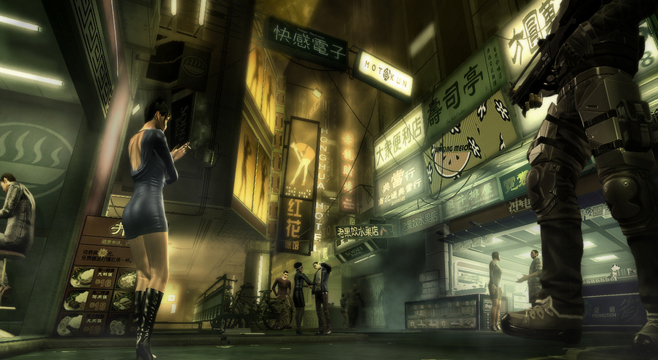