One Model Nation is a graphic novel written by The Dandy Warhols frontman Courtney Taylor-Taylor, with art by Jim Rugg, whose previous work includes The Guild from Dark Horse Comics. Set in 1977 Berlin, it is a multimedia music and graphic novel project about an immensely popular (and fictional) German electronic rock band called One Model Nation. Historical tidbits from that decade of German history are woven into the main plot about the band, which is targeted as a terrorist group by the German government, mainly because of its popularity amongst the youth and counterculture.

What’s fascinating is how many themes from the story – which takes place over 30 years ago in an alternate history – translate so easily to today’s world. There’s terrorism, media spin, government witch hunts and how it all relates to alternative youth culture, as well as what creates legends and the mythologizing that occurs in history and pop culture.

I recently had an opportunity to ask Taylor-Taylor some questions about One Model Nation. Here’s what he had to say.

Unwinnable: There are so many interesting elements in this graphic novel, and you mention on the website and in the back of the book how it grew out of a 10-year creative process. In its early stages, were there ever any thoughts of placing it in another turbulent musical time period, or was 1970s Germany always the creative starting point?

Courtney Taylor-Taylor: It was always Germany in the ’70s, but I’ve been saying lately that I’d really like some other writers to do the same story but set it in Rome or the Civil War or outer space. We’ll see if I get any takers.

Unwinnable: It’s amazing how influential the music of that time was, and how easy it is to listen to Neu! or Can and mistakenly assume that it was released recently. When you and collaborator Donovan Leitch were starting to record the accompanying album, what ingredients went into the mix? 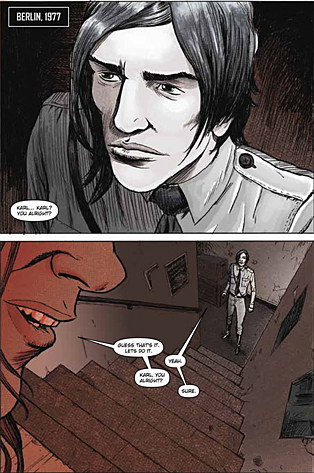 CTT: The guys in the band did most of the work on the record. They started with a lot of electronic stuff that they brought in and I sort of made myself officer in charge of “klanging.” If I felt there wasn’t enough, I’d interrupt what they were doing and just have at an old fireplace grill or bicycle frame until you felt that it was gonna be OK, and then I’d say thanks and let them get back to work. Did I mention Donovan’s Coq au Vin? I ate a lot of it that week and half drained my wine cellar, so that’s kind of why “Transmission” is my only song on the record.

Unwinnable: Was there also an effort to make the alternate reality Germany of this book timeless, like the music of those Krautrock bands? Remove some of the German elements and the appearances by real-life people like the RAF members, Klaus Nomi and David Bowie, and it suddenly becomes a story that could have taken place any time from the ’70s through now, even possibly in the future. The plight of One Model Nation even reminds me in some ways of Acrassicauda, the Iraqi metal band featured in the documentary Heavy Metal in Baghdad, which eventually had to flee Iraq due to death threats and the turbulence brought on by the war and terrorism around them.

CTT: I haven’t seen it, but holy moly, I’m gonna now. When the Dandys were in Romania, we played with a Romanian band from the ’70s who fled to Germany and had only returned a few years before. They were regarded by everyone at the show as the greatest rock band ever from Romania, and I must say that they were pretty awesome. Prog ’70s, but Eastern Bloc, not Kraut.

Unwinnable: The dynamic of the band members is very distinct, and their interaction comes off as very natural. I assume some of that came from your own experience being in The Dandy Warhols, but you also mention using people you’ve known as reference and talking to people from that era like Karl Bartos of Kraftwerk. Anything specific about any of the characters in the book that came out of your own experience or from talking to any of the people who were there?

CTT: The opening is the short version of my time with Bartos. The conversation with Ulrike and Sebastian is one I overheard in college that I though was funny as hell and really captured a type of headspace that applies here perfectly. Pretty much all the interband dialogue is just kind of what bands tend to talk like. Nobody has ever really done it before, so I figured somebody ought to. I’m pretty embarrassed by movies that have rock bands in them, because they always have the lamest pep talk convos, like, “Come on you guys, we gotta stick together” and “We’re gonna make it” or whatever. Then they save the surfboard shop.

Unwinnable: This project started out as a movie pitch that eventually became a graphic novel. What were some of the more difficult elements to convey when translating the original script into a graphic novel?

CTT: Oh man, like everything. Fortunately, it wasn’t really a screenplay so much as a script, and I think that made it a bit easier. I had Joe Keatinge and Jim Rugg helping with that, so I just let them go. I just made sure they left in whatever was needed for me to feel that the intention of the story and the characters were right on.

Unwinnable: You mention in your commentary in this new edition of the book the choice to not use sound effects. Were there any other conscious decisions made to maintain a more cinematic and minimal quality to the narrative? 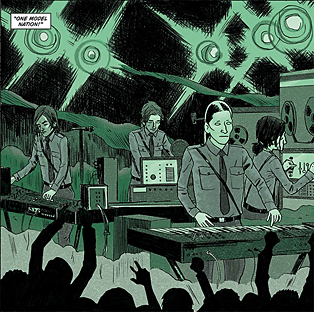 CTT: Just that and chopping out a bunch of talking heads. Once we were rolling and I realized how good Jim is at telling a whole story in still life, I pretty much just tried to get everything, myself included, out of his way. This is something that filmmakers could really benefit from in America: Let the story get on with its bad self and keep your actors from constipating. Why is that so hard nowadays? Do you really have to have the cute one talk so much?

Unwinnable: What were some of the other influences besides music that went into the world of One Model Nation? Any film, art, or comic book influences? Just curious, since you suggest in the back of the book for people to check out the great German directors Werner Herzog and Rainer Werner Fassbinder, and you also cite Mike Allred’s Red Rocket 7 as an influence.

CTT: Yeah, there must be a ton, but I can’t think of any specifics. Oh yeah, the Dandys used to get hassled by the police a lot when the anarchists had a warehouse space around the corner from our studio. They were the ones with the famous picture of the kid kicking in the Starbucks window with a bandana over his face. He was wearing Nikes. Oh, Donno just loved that one. Very Baader-Meinhof.

Unwinnable: Considering how ambitious and multimedia this project has become, is there a chance of a full-length animated or live-action feature down the road?

CTT: Yeah, my friend Dan Berry has begun animating a scene. He did a quickie called “One Model Nation – Animatic” that you can see on YouTube. The full animated scene should be done in a few weeks, and then I’ll start looking to put a team together to do the whole movie.

Unwinnable: What about the potential for a live music tour?

CTT: I think we’ll just stick to DJ gigs. I mean, the band disappeared in ’78, ya know?

Unwinnable: Any closing thoughts on One Model Nation?

CTT: It was a really great thing to create and work on and I got a lot off my chest. It’s natural for humans to need to pass on information or things they’ve learned. This is called storytelling, and it is an actual compulsion but for a good reason. This is how we stayed alive, by Ug telling Wug about the tarpit or the woolly mammoth that skewered Zug and so on. Well, that and I also wanted Star Wars meets Doctor Zhivago set in 1978 Berlin, and this is about as close as I could get it.

One Model Nation is available now on Amazon.

One Model Nation, The Dandy Warhols