After a year of waiting, I got my chance to return to Toy Fair this week at the Javits Center in New York. Last year, I broke my press cherry and attended Toy Fair 2011 – it was a magical experience. There I stood, a lover of toys and games, surrounded and overwhelmed by future plastic prospects. This year, I had a game plan and got a chance to really take note of, not only the fantastic creations that will flood retailers’ shelves, but also the immensely large business and marketing aspects of the toy industry. It was quite eye-opening. 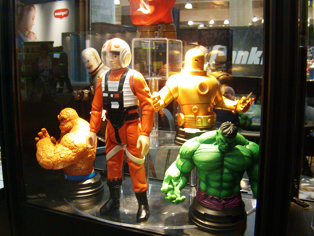 I’ve been to many a con and trade show and you don’t always get to see a glimpse of the industry. Since so many shows are open to the public, companies are trying hard to impress consumers. Toy Fair is only open to members of the toy industry and press, so I really got to see a lot of wheelin’ and dealin’ and marketing reps out in full force. The booth setup was a little different this year as well. I noticed that many companies went with a walk-in style booth that allowed them to keep specific toys under wraps, as opposed to the typical table setup that you would most likely see at a comic con.

Now, on to the toys! I hit the action figure aisles first and saw a number of vendors from last year like Diamond Select, McFarlane Toys, NECA, Bif Bang Pow! and Underground Toys and they all had a great showing this year. From Doctor Who to The Walking Dead to Portal, they showed products from every fanboy’s dream. Kotobukiya had a booth this year, and a majority of their items revolved around their ingenious Star Wars ice trays. They had the R2D2 and Han Solo in Carbonite trays front and center, but when I entered their booth, I got a glimpse of about 20 more trays hanging on the back wall.

Speaking of Star Wars, if anyone should win licenser of the year, it would be this property. Toy Fair doesn’t only attract toy makers, but merchandisers as well, and the one thing most of them had in common was Star Wars.

Marvel was also pretty big. If a booth didn’t have Star Wars merchandise, then it had Marvel. For example, Peavey (maker of guitars and amps) was on hand showing off their Marvel superhero line of acoustic and electric guitars.

There was also a plentiful amount of remote-controlled helicopters, which I believe was brought on by the popularity of the Parrot AR.Drone.

Since technology has come a long way in just a year, there were many smart device-integrated toys that used iPhones, iPads and Droid devices. As I was perusing through the board game isles, I was sequestered by a company called Physical Apps. They make a foam ball that allows you to insert a smart phone deep in its core. You can physically play an app as opposed to sliding your finger around on the screen. They demonstrated a bowling game that transmits the game to your television and also adds online multiplayer so you could play a game with a friend anywhere there is Wi-Fi. They told me the ball would accept 90% of the smart phones out there and as of now, they have a few apps available for use with the ball. They are hoping for support from third-party developers. This is my pick for best technology of the show. While the apps might not have been the greatest, the idea of physical interaction piqued my interest.

I must also mention the return of electric slot cars. Being a kid of the ’70s and ’80s, this is something I owned and played with frequently. In fact, my personal slot car track was from the A-Team. Slot cars have come a long way in 30 years. The technology is 100 times better. The cars are bigger and feature functional head- and taillights, lithium batteries and brushless motors. 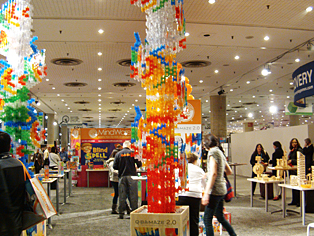 Over the years, I have had my eye on the Carrera brand of slot cars. The track can support 1/32nd and 1/24th scale cars and they are fast! There were about five companies showing slot cars – one of them had a Star Wars track with both speeder bikes and Tie Fighters – but to me, Carrera makes the best quality tracks and vehicles (and they aren’t cheap). Expect to shed some weight from your wallet if you plan on picking up one of their kits.

Another item I found interesting was the Q-BA-MAZE 2.0. It is essentially a system of interlocking, stackable plastic blocks into which you drop a ball and watch as it travels through the maze. They had two 15+ foot-high models around which many people gathered to watch and partake in the ball-dropping.

Last year, I was only able to attend the show for one day. This year, I returned on the last day and was I in for a treat I didn’t expect! I had no idea that half of the companies don’t want to leave with their stock, so they try to sell off as much as possible. I have to give a special shout-out here to Diamond Select. I bought two figures from them at wholesale price. I also saw something that I had to own and was willing to pay for it, but DS informed me that the item was given away as a treat – so they just gave it to me. It is a box of Soylent Green Crackers. “Soylent Green is people.” I have no plan to eat the crackers, but as a fan of the movie, it will sit nicely on my shelf next to my VHS copy of the film. I cashed in at a few other booths as well, as one of the vendors informed me that the best part is that everyone sells their items at wholesale, so you are guaranteed a good deal.

I want to also mention that it was on my second day that I ran into one of my all-time favorite geek retailers, ThinkGeek. They had a small booth displaying items from Dexter, Portal and Minecraft. It was very cool to meet ThinkGeek in person and proclaim my fondness for them.

Toy Fair 2012 was exhausting but an immeasurable amount of fun. Having seen many soon-to-be-released items, I have high hopes for this year in toys.

To find out more about Toy Fair, hit Ken up on Twitter @Kursse.

Confessions of a Toy Hunter: Walking Dead To The Toy Fair 2011
Previous Post