When it was announced that sex was the topic of Unwinnable’s monthly theme week for April, I had visions of Team Unwinnable writers contributing stories of young lust, exposing past scandalous indiscretions and, yeah, maybe even a full-on Sonic and Mega Man slash fiction piece. Whatever the case, though, I found myself thinking about the X-Men.

I was a bit of a late bloomer approaching adolescence. While my peers talked about birds, bees and baseball metaphors, I found myself spending my extra free time delving into comic book lore. I spent a lot of my last pre-pubescence reading X-Men comics. The Chris Claremont days of the Uncanny X-Men were full of superheroes fighting for a world that feared and hated them – and a healthy dose of soap opera.

However, I was also confronted by my budding sexuality at every turn of those pages. Whether it’s Nightcrawler’s jaccuzi rendezvous with Amanda Sefton, Psylocke’s racial switcheroo from fully clothed British psychic adventurer to scantily clad Asian ninja assassin in “Acts of Vengeance” or Rogue’s constant lack of physical intimacy, the X-Men were full of sex both on the narrative surface and beneath it. Still don’t believe me? Just look at Gambit’s thong. 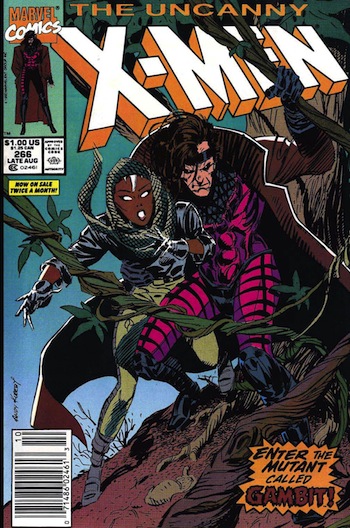 In the early 90s, the trade paperback market was just starting to take hold in comic shops and bookstores. And while I’d been reading the Uncanny X-Men on and off since around the “Mutant Massacre,” my knowledge of the more classic Claremont/Byrne X-Men was somewhat lacking. It was around this time I came across the trade paperback collection for the Dark Phoenix saga.

My uncle had thrown some early Chris Claremont and John Byrne X-Men books my way as a kid, so I knew some of the story, but I never got the whole thing until the trade paperback collection was released. Now I figured I’d stave off the inevitable and delve into some classic X-Tales.

Dark Phoenix deals with X-Men member Jean Grey, besieged by dreams of her ancestor, Lady Grey. Getting deeper into the story it was revealed that team’s old nemesis, Mastermind, was projecting these illusions into Jean’s mind in hopes of ultimately bringing the insanely powerful Phoenix – her alter ego – over to the villainous Hellfire Club as its Black Queen.

Mastermind is successful; Jean transforms into Black Queen, reveling in the powers she kept control over for so long. This in turn leads Jean, who eventually breaks free of Mastermind’s influence, to become fully enveloped in her power and becomes the Dark Phoenix – a creature with an appetite for widespread oblivion.

I could relate. It was the early 90s.I was just about to become a teenager. Up to that point, I was indifferent to girls. There was a girl on my baseball team that I liked, but that was more because she played baseball than anything else. (I was 10 for Pete’s sake.)

By time I was around 12, I started to take notice in the opposite sex. Girls at school, girls at the movie theater, girls at the pizza place – they were all of a sudden everywhere. They scoffed at my sweatpants, so I asked my parents to buy my jeans. Why did I care what they thought? It was mind-boggling.

Desire is the central theme of the Dark Phoenix saga. When Jean Grey was first introduced, she was the object of the four male X-Men’s affections. Angel and Beast were especially interested, (Beast inappropriately so in the first issue). Old Hank was pretty grab happy, so Jean ­– never one to put up with any crap – tossed him across the room with her telekinesis. 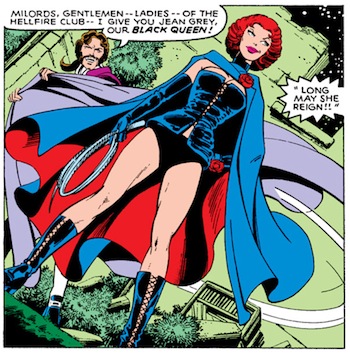 As time went on, Beast and Angel calmed down; meanwhile, Jean and Cyclops eventually began one of the most convoluted romances in comics. When Wolverine was introduced into the fold, a love triangle developed between Scott Summers, Jean Grey and Logan. Jean, when not corrupted by her power, loved Scott but she was attracted to the dangerous new Canadian in X-Mansion. It’s a pretty silly love triangle now, but it drew me in.

Over time, Jean became more and more sexualized. She went from wearing the same blue and yellow bodysuit the boys wore to a green miniskirt and yellow boots as Marvel Girl. When Jean became the Phoenix, she traded that 70s outfit for a formfitting unitard and a sash. The Phoenix was the culmination of Jean’s power, so it was only natural from a storytelling perspective that the villains would want to turn her to their side.

As Dark Phoenix, Jean ate a sun, killed billions of creatures, (as well her friends, almost) and brought the X-Men to an utter defeat at the hands of powerful aliens that wanted to the threat of Jean’s current form.

In the end, Jean, consumed by her desire and full of the Phoenix’s power, would destroy all of creation. She knew that. So, she bid her love, Cyclops, goodbye. In a flash, Jean Grey was dead. 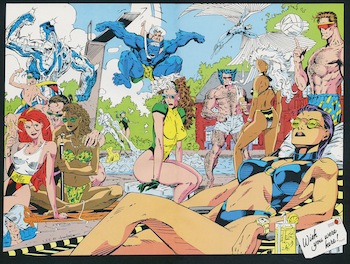 As a budding adolescent, the metaphors layered within the Dark Phoenix saga weren’t completely lost on me. It was a funny thing, reading a comic about the consequences of succumbing to every desire when my own desires were set on overload.

My hormones were a bit out of control at the time. I started growing hair like Wolverine in certain places and I all of a sudden understood why my older cousin took a second (and third) look at Jean in her Black Queen costume.

Seeing what complete surrender to one’s baser instincts did to a fictional character, I thought it had to be worse in real life (hey, I was a weird kid – the logic worked at the time). It’s a great comic that oddly enough, taught the lessons of responsibility that stuck with me longer than most of the other books I read in middle school and had a stronger effect on my formative years than Johnny Tremain ever did.

Ian Gonzales probably won’t talk to you any further about Gambit’s thong on Twitter @IanGonzales.