The last time I reviewed Manhattan Projects for this column, Enrico Fermi’s origins were only teased. This issue opens with his funeral. Previously, Fermi’s intentions were revealed to the mad scientists of the Manhattan Projects. Fermi was an agent of the aliens he and Daghlian met a few issues back. Fermi, it seems, was an alien that possessed a slow Italian child and proceeded to spy on humanity – looking to see if they could fend off an alien invasion. Now that the smartest bastards humanity has to offer are hip to the coming danger, the combined forces of Los Alamos and Star City are working on several different ways of combating the extraterrestrial threat.

Well, all except maybe Oppenheimer. He has his own agenda. Or is it “they” have “their” own agenda? 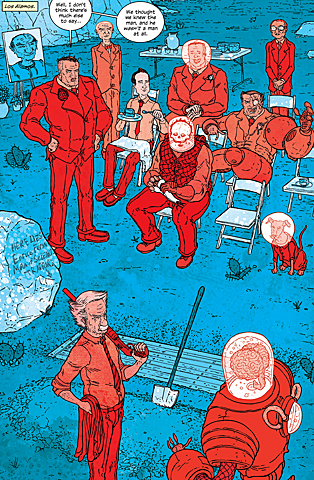 Wow. A lot can happen in six issues, huh?

The thing that grabs me about this comic is how it is a seamless blend of Hickman’s writing and Pitarra’s storytelling. The first page is a splash of Fermi’s funeral. The splash is filled with so much information about the mood and the characters in the scene. Oppenheimer is stoic, von Braun is laid back and laughing, Feynman is eating cake and Einstein stands over Fermi’s grave, shotgun in hand, thinking. The story then flashes to a year later. The scientists are working in teams in an attempt to figure out a way to stop Fermi’s former masters.

Pitarra draws Albrecht Einstein with such a menacing vigor. The character dissects dead aliens, using a saw and his bare hands. He can barely mask his glee. Nazi rocket scientist Wernher von Braun shows similar excitement as he sends Laika into space on a five-year mission. And then there’s Oppenheimer talking to all the people he’s eaten, giving the reader the creeps. These mad scientists don’t seem to give any thought to the consequences of their actions, but Soviet Minister Ustinov does.

Ustinov serves as the conscience for this group of monsters, but none of them really care about that. He comments on their arrogance and – as he sees it – the nonexistent line between science and sin. Yup, this book has a communist talking about sin.

One of the things I like most about this book is Pitarra’s approach to his characters’ acting. Even without a face, per se, Daghlian’s sorrow at Fermi’s funeral is clear. Later, he’s swimming in an ocean of lava, apparently over his friend’s death. At least, that’s what Groves and Ustinov seem to think, but Daghlian’s body language suggests otherwise. Whether it’s Daghlian’s grief-stricken hunch, Oppenheimer’s outward calm or John F. Kennedy’s cocaine-induced paranoia, Pitarra brings these evil bastards to life with impressive skill.

Manhattan Projects #13 is a quiet issue, setting up what is sure to be some nastiness between humanity, aliens and infinite Oppenheimers. For a book about a bunch of amoral narcissists, this comic has loads of character and has me dreading how far Hickman and Pitarra will go. 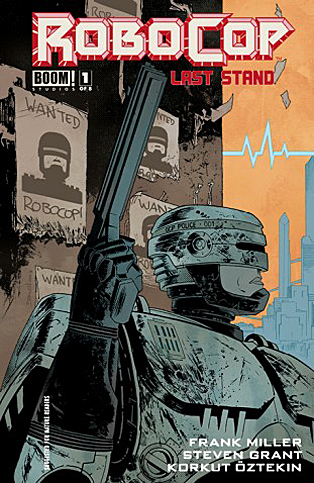 Here I am, back reviewing another comic book by that Frank Miller guy. I wrote an article for Unwinnable a little while ago called Brand Millercop, where I discussed the eccentric comic book legend’s involvement with the Robocop franchise. Miller wrote the screenplays for Robocop 2 and 3, although only some of those ideas ultimately were sprinkled about the end products. It’s interesting to finally see Miller’s actual original vision for Robocop 3. While I was lukewarm about the comic series Frank Miller’s Robocop (based off his screenplay for part 2), I find that The Last Stand is so far much more promising, especially compared to the disappointing film that was Robocop 3.

The premise picks up where the last comic series left off. Franchise bad guys OCP have a private paramilitary police force that has replaced the disbanded Detroit police. This new police force rules Detroit with a fascist fist, forcing people out of their homes so OCP can tear them down and put up their own expensive housing and basically take over the city. Only one problem: that pesky cyborg cop Alex Murphy is still out protecting the city and hiding amongst the poor and disenfranchised in one of the remaining tenements. With his family long gone and his partner, Lewis, dead, all he has left is to take OCP down once and for all. OCP has ways of fighting back, though, like the constant barrage of TV propaganda showing Robocop to be a dangerous killer, neatly placed between those entertaining commercials similar to the ones that popped up in the original films.

Issue #1 of this series is set up for what may be the most redeemable project associated with the name Frank Miller in a while. Comic writing vet Steven Grant does a fine job filtering the eccentricities that I’m sure littered the original Miller script. This was a problem with Frank Miller’s Robocop, because it let Miller’s freak flag fly (and the end result was an incoherent mess). Korkut Oztekin and Michael Garland do a fine job with the art, as it manages to be both atmospheric and dirty with a heavy dose of dystopia. Think 1984 meets Mad Max by way of Dirty Harry.

With seven more issues to go, there’s plenty of opportunities for this ship to crash, but so far so good. If there’s one thing Miller has always excelled at, from Daredevil to The Dark Knight Returns to Sin City, it’s writing flawed-yet-heroic characters pushed to their limit and ultimately overcoming the odds. The thing is, sometimes these heroes don’t make it out alive.

The Superior Foes of Spider-Man #2 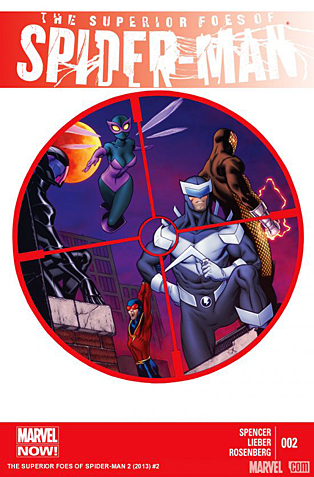 When last we saw Boomerang’s Sinister Six, he promised them a job that doesn’t really exist, and he’s indebted to the Chameleon. Yessir, Spencer and Lieber have put this crew in a pickle.

Boomerang is second only to Kate Bishop in my “Favorite Marvel Character of 2013” list. I never thought I would ever think that, much less write it. Yet here we are two issues into The Superior Foes of Spider-Man, and Spencer and Lieber are surprising me with the depth they bring to the schlub the parole board knows as Fred Myers, as well as his criminal crew.

Spencer and Lieber are expanding a corner of the Marvel Universe: the second-rate costumed crook. The first issue established the characters and some of the day-to-day of that world. This issue goes a little deeper, introducing us to someone who may be the scummiest character in all of Marvel comics – Boomerang’s lawyer, Partridge.

The scenes between Myers and Partridge drip satire. Partridge, who skipped town the last time Boomerang got in trouble, came back and agreed to help Fred Myers get in good with the parole board. As Partridge goes on to make awful puns, Myers drifts off and daydreams of beheading the dirtbag with a boomerang.

The issue also covers another problem the second- and third-tier super villains have to worry about: the Punisher. Probably remembering when the Punisher shot Stilt Man with a rocket launcher (Punisher War Journal #1), the Sinister Six turn tail and run the second they hear gunfire and see a white skull. Spencer and Lieber do a really good job of placing the Punisher in context. Overdrive, Beetle, Shocker and Speed Demon are super-powered people trying to make a dishonest buck. They don’t want to deal with a psychopath.

Spencer and Lieber’s exploration of this side of the Marvel U has a lot of potential. They’re two issues in and they’ve defined these characters so well. Beetle is the newbie and is disinterested in anything Speed Demon has to say. Speed Demon’s the jokester. Overdrive is the thrill-seeking getaway driver. Boomerang is the ne’er-do-well leader and Shocker is the coward. And yes, that still only makes five members of the Sinister Six, but that’s a joke you just have to read in the comic.

The Superior Foes of Spider-Man is a lot of fun. Sure, these characters don’t go up against Spider-Man in this particular issue, but that’s OK in my book. I don’t want to see them in jail or in the hospital just yet. This issue, they knocked off a restaurant. Next, they plan to steal something they all thought was an urban legend. Two issues in and I’m already pulling for these losers. Kudos, Nick Spencer, Steve Lieber and the whole team!