Zenescope has already tackled Alice in Wonderland in another series entitled Return to Wonderland (which I didn’t read), so I’m not sure what makes this series that much different. I think this is seen as a prequel to Return to Wonderland, where readers get to see all the craziness Alice encounters when she first goes through the rabbit hole. Like any other Zenescope property, women are depicted as little sexpots, wearing clothes straight from a “Sexy Costume” website. Despite this misogynistic take on Alice, Gregory still writes a pretty good story that utilizes the aspects of Alice in Wonderland that readers know best. 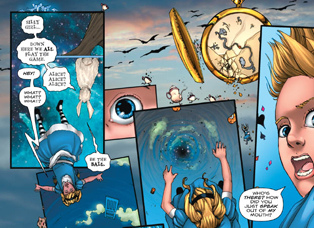 In this version, a man named Charles Dodgson (Lewis Carroll’s real name) is the earthly disciple of the Jabberwocky. He lures innocent people to Wonderland in exchange for immortality. The story opens with Dodgson and his wife urging a young Alice to enter a hole in a tree, which will lead her to Wonderland. As she goes through, voices call to her until she meets the famous white rabbit. She follows him and eventually falls into the clutches of the Jabberwocky. Here, she sees the future unfold and once ensnared by him, she wakes up older, more mature (as in “developed”) and in the world of Wonderland. She meets a more aggressive Cheshire cat, who tries to eat her. After escaping from him, Alice finds herself on a beach, face to face with a giant walrus, who also wants to eat her.

This story is wacky. But one thing that works well is Alice’s internal dialogue. She truly is a lost soul, with no concept of the world she fell into. And as any fan of Alice in Wonderland knows, she’s only scratched the surface of what Wonderland has to offer. Alice still has a lot of other encounters ahead.

Robert Gill also should be praised for his art, as he succeeds in giving the comic structure where it needs it and emphasizing the lack of structure when things get really crazy. On several pages, the panel construction makes for a very abnormal read, which works well with what can only be called an abnormal story.

To be honest, I thought this issue was going to completely suck. It didn’t. While it isn’t a great comic, it rises above the low bar I set for it. I remember seeing the solicits a few months ago and feeling a sense of excitement at the prospect of seeing Raven Gregory and the rest of Zenescope take on Alice in Wonderland. I’ve enjoyed series like Fly and The Waking, so I hoped this would hold the same interest.

It does. And I hope you find it as fun as I did. 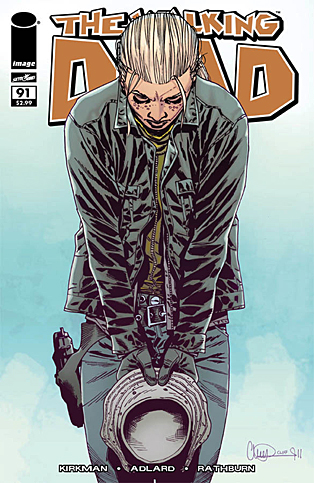 This series can be both stagnant and brilliant as it moves beyond the realm of zombies and more into the world of human survival. This trend has been happening for a while, but seeing Rick and his band hole up in a housing compound is interesting for only so long.

What I liked about this issue is that Kirkman is exploring Rick’s growing distrust and insanity. It’s only natural for him to be wary around the mysterious man named Jesus, who is offering to create a trading partnership between his commune and Rick’s. Yet his reaction is disturbing. As he says in the issue, “After everything, I feel like we’d have a hard time finding anyone more dangerous than we are.”

On the first page, Rick tricks Jesus in order to capture and tie him up. He doesn’t trust that the man has no ulterior motive beyond wanting to open up a trade agreement. He convinces Abraham and Michonne to go with him into the wilderness to draw out Jesus’ people (who, Rick assumes, are waiting for them). What he finds is nothing but some zombies. The end of the issue is chilling. As Rick looks out onto the city below him, he says that if Jesus was telling the truth, they’ll apologize and let him go. If not, he says, “We’ll take everything they have and leave them for dead.”

This series works best when the characters actually do something! Most recently, Rick’s son Carl was shot through the eye. While he slowly recovers, readers can see a change in him. But this is the last great thing that occurred. Mostly, the issues have revolved on little spats between the characters, strained relationships and the occasional zombie.

But I have hope. Issues #47-51 saw the return of The Governor, easily one of the best characters Kirkman ever created. They also saw the death of Rick’s wife Laurie and their baby, a moment so shocking I still can’t believe it occurred. What this tells me, then, is that Kirkman is building to something big. Nine issues shy of the big #100, The Walking Dead is starting that slow rise. As crazy as issue #50 was, I think #100 will be even crazier.

The best thing about The Walking Dead is that no one is sacred. Kirkman could easily kill off a major character (as he’s done before), so I read towards issue #100 with some trepidation. But Kirkman has proven in the past that has a plan. While AMC brought The Walking Dead to television, it doesn’t hold a candle to the comic. Kirkman’s writing on the book is ten times greater than anything that’s appeared on the show.

I have high hopes for issue #100 but also a lot of fear. Who will die off? Who will survive? Will Rick leave people for dead and complete his fall into madness?

Only time will tell, but I’ll be right there to see it happen. And you should be, too. 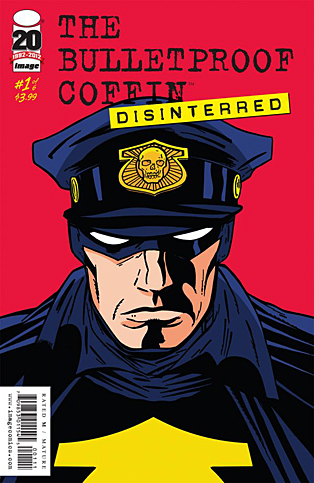 The issue begins cryptically with a man digging his way through a series of tunnels, only to emerge in a graveyard. He meets a violent end at the hands of a villain called Coffin Fly, and the next day our hero, Johnny P. Sartre, and his partner, Ginger Palmer, arrive on the scene to check out the body themselves. They are involved in an investigation dealing with a series of murders with a similar modus operandi: The victim’s heads are removed.

Sartre and Palmer were also once superheroes known as The Shield and Lady Justice, a duo who fought communists during the 1950s. Working through the mystery, Sartre figures out the connection between all the deaths and goes to where he assumes the final murder will take place. In a twist, Sartre takes out the person whom he believes is the actual murderer and afterwards dons his old costume to return as The Shield. This time, however, he’s on the wrong side of the law.

What I enjoyed most about this issue was the fun detective work Sartre has to do. Like most mysteries, the solution is simple but clever enough to be satisfying. Shaky Kane’s art stylings work perfectly within the contexts of the time period – flashy colors and simple illustrations that feel well suited for the story. Plus, with the amount of gore he has to show, Kane does a fine job of depicting the violence while keeping the art cartoonish enough to avoid making the gore too visceral.

Additionally, Hine creates the perfect mood for a pulp story. Shadows and light play important roles, as does the setting and weather. Like most noir stories, the climax occurs during a rainstorm, and the setting works well with the intent of the story. Sartre is responsible for his own downfall, as he becomes his own worst enemy. His need to dissect everything around him leads him to distrust the only person to whom he feels a connection. As a flawed character, Sartre is extremely interesting. The issue relies heavily on his personal narrative, so readers get a look at his thoughts as he first deconstructs, then destroys his relationship with Ginger. The end of the issue offers readers a reason to come back for more and a conflict that will be interesting to see played out.

The Bulletproof Coffin: Disinterred is gory and fun. The first issue is a great beginning to an intriguing story, and I’m looking forward to reading the rest of the series. Hine does a great job of crafting a neat detective story, and Kane gives the comic the visuals it needs to succeed.

It’ll be interesting to see where the story goes from here and to see if the conflict of The Shield is resolved as wonderfully as it was created. I’m looking forward to more of Shaky Kane’s art and David Hine’s graphic gore.

Alice in Wonderland, The Bulletproof Coffin: Disinterred, The Walking Dead