Growing up, if the word “star” appeared in the title of something, I was immediately interested. There’s the easy list: Star Trek, Star Wars and Battlestar Galactica. Then there’s the other list: Battle Beyond the Stars, The Powers of Matthew Star and to a lesser degree, Star Search.

In previous generations, the word “space” was the buzzword. There was no shortage of space rangers, spacemen and space guns. My father, Charles Francis Moran V, was no exception to this rule. He had a toy that he passed down to me, which I played with quite a bit. The toy was the Tom Corbett Space Academy playset by Marx. I remember reading the word Marx and how it would have my mouth make different shapes. Written on the side of the plain cardboard box was the phrase, “One of the many ‘MARX’ toys – have you all of them?” I thought that phrasing was so strong; I used to read it over and over again as if it were a mantra. 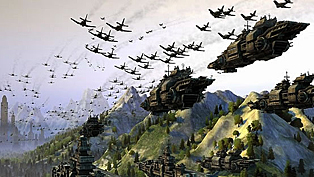 The playset boasted a powerful design and remarkable quality. It came with a constructible wall to go around the base and several structures and buildings for inside the play area. This toy got a much extended life and enjoyment, having been part of both my father’s and my childhood. The idea of building a “base” is really what set this toy apart from all others for me. I think it was also the freedom, considering there was “some assembly required.”

At E3 this past summer, I was fortunate enough to get some hands-on time with Lightbox Entertainment’s upcoming release, Starhawk, and I was happily reminded of those Space Academy memories.

Starhawk is an exclusive release from Sony for the PS3. Set as a spiritual successor to Warhawk, Starhawk will also feature multi-vehicle combat for both land and air, as well as large fields of play.

The multiplayer demo for Starhawk recently went live, and I was able to play within the glorious chaos of building structures and fighting the other team, while taking over control points across the map. Starhawk features gameplay combining a third-person shooter with real-time strategy elements. However, it’s not like RTS games where the buildings are constructed (think “Construction Complete”). Starhawk is more like in a playset, where the buildings, vehicles and weapons drop out of the sky on to the play field. Some assembly required.

Fans of Star Wars: Battlefront and Command & Conquer (and the Tom Corbett Space Academy) should definitely check out this game.

Chuck can be found eating hot sauce and peanut butter sandwiches (cut into star shapes) on Twitter @JapanDudeGirl. Starhawk, for PS3, will be released on June 1.