The Walking Dead reaches issue #100 this week. For a comic that was published under a semi-independent name, The Walking Dead has gained a huge following and spawned its own cable adaptation, as well as a videogame by Telltale Games. So with the comic hitting #100, does Robert Kirkman pull out all the stops? No. Not immediately, anyway. Instead, what he delivers is a heart-wrenching issue that reminds people of the horror that awaits them in a world devoid of humanity.

In this issue, we finally meet Negan. While I can’t say that he’s badder than the Governor, I can definitely say that he is scarier. Negan’s speech to Rick and his crew borders on silly, especially the number of f-bombs he drops, but it’s also the voice of an insane person. And when Negan starts enacting his revenge, Kirkman and artist Charlie Adlard hold nothing back. The result is violent and ghastly. Remember Michonne’s revenge on the Governor? This is more horrific. Not because of the physical pain, however, but because of the emotional toll it will have. 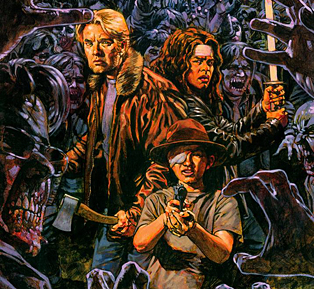 Charlie Adlard’s art is a constant of the series, and here he has to depict some serious violence. The imagery is horrifying, but Kirkman’s writing makes it even more emotional. Without spoiling it, I’ll just say that one of the main characters dies, but in his/her final moments, he/she cries out to a loved one. It’s a truly sad moment, especially considering the circumstances.

What’s even greater, however, is the revenge that will be enacted – one of the characters promises Negan that he will face retribution. Image has instituted a block on all advance reviews for The Walking Dead, so we know that the head honchos over at Image want this series to be a total surprise for all fans. If that doesn’t speak to the story that Kirkman has created, I don’t know what else will.

One hundred issues is definitely a milestone, and this reviewer commends Robert Kirkman for his consistently excellent work. The Walking Dead has become a household name, and it has less to do with zombies and more to do with the characters. The humanity that seems lost by the end of this issue – and many of the issues leading up to this – is not completely gone. There are hints of hope. But Robert Kirkman loves to drag his readers down into the darkness before bringing them into the light. This story is going to get worse before it gets better and the fact that I feel emotionally connected to the characters is as great an indicator, to me, that The Walking Dead is a superb book worthy of our praise. 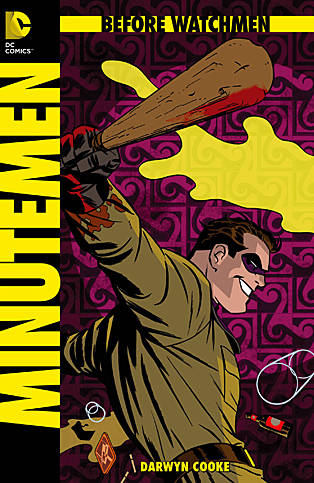 I liked the first issue of Minutemen, but I didn’t love it. Maybe it was the Watchmen hangover or the feel of DC’s transparency in using one of the best-written comics ever to make money, but I thought Minutemen was not great, although admirable in its effort. Minutemen #2, however, is fantastic. It’s an issue that finds its own voice, communicates a more serious story and paces itself well, giving each character equal time to plant himself in the readers’ minds.

Darwyn Cooke shifts his narrative between the past and present, showing the potential repercussions of Hollis Mason publishing his tell-all book, Under the Hood. But Cooke goes back further to show a moment where the Minutemen realized that they had the potential to actually be heroes. The results are shocking and well-paced. The construction of the comic, particularly the final 10 pages, are beats ahead of all other Before Watchmen books. Cooke’s narrative feels original, and while he’s using beloved material as fodder, the book reads as an original piece. There are moments that stray from Alan Moore’s work, but they find a place in Darwyn Cooke’s story. Where Moore insinuated character motives, Cooke takes this as gospel and runs with it. The result is a genuineness that helps the book find its feet.

Cooke is the sole artist as well, and he captures the golden age visualization perfectly. The final five pages of the comic are excellent. They hearken back to Dave Gibbons’ meticulous panel construction, and they pace the story nicely, building the tension until the final image.

I was skeptical with Before Watchmen, and while I haven’t completely bought into the premise, I’m sold on Darwyn Cooke. He is truly an artist and a person who has the talent to make Before Watchmen work. If you haven’t picked up a single issue, I urge you to try Minutemen. It’s not Watchmen, but it is pretty damn good. 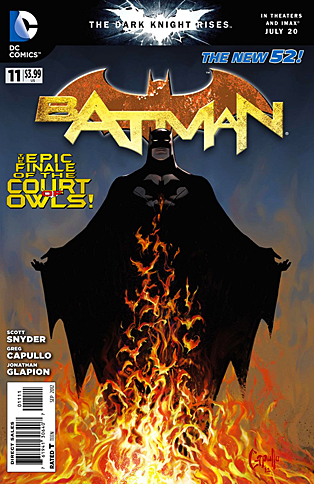 Bannen’s Book of the Week: Scott Snyder brings his “Court of Owls” story to a close with a final issue that is every bit as epic as you’d hope. Snyder delivers a satisfying finale that leaves no plot thread hanging and no stone unturned. If you had any doubt as to why Bruce is the best at what he does, Batman #11 will show you otherwise.

Scott Snyder’s story is boundless. It’s epic in scope but subdued in its presentation. Snyder keeps the story character-driven, so while the issue is full of intense action, it still takes time to get back to its purpose – telling the story of the lost Wayne child. And even while the ending is meant to be definitive, there are moments of doubt where readers (at least this one) won’t look at Thomas and Martha Wayne the same way again. Here, I admire Bruce’s allegiance to his parents, even if I can’t relate to it. The final moments of the issue, between Dick and Bruce, give readers a resolution that secures Bruce’s resolve for being Batman.

Greg Capullo has done fantastic work with Scott Snyder. He’s shown Bruce at his weakest, and these moments are hard to watch. Equally impressive are Capullo’s Owl illustrations. The man claiming to be Thomas Wayne Jr. is an imposing figure who wears a pretty awesome costume. Considering the amount of action Capullo has to depict, the issue never loses its focus, and each panel is as clean as the previous one. There are still some creative and fantastic images (like a full-page maze), but Capullo doesn’t play much with the panels. What this issue proves is that Capullo is a master of using imagery to convey tone. The book is chock-full of shadow-heavy illustrations. Capullo’s facial expressions are also potent and convincing.

Scott Snyder has cemented himself as one of the greatest writers in the Batman pantheon. He has shown an uncanny ability to introduce new conflict, while still keeping true to the established character. Truly, he is a master storyteller, and this arc should be praised for its boldness and scope. Now we’ll have to see how he follows this up with his Joker. This reviewer cannot wait.

An Interview with Martin Eden, Creator of Spandex: Fast and Hard