When you think of death, toys don’t usually come to mind. It takes a unique individual to appreciate repulsive and downright weird collectibles. I, for one, am one of those people. If you’ve ever seen an episode of Oddities on the Discovery Channel or Science Channel, then you know that there is a small percentage of the population that enjoys macabre curios. It also makes you realize that there’s not much of a fine line between carnival treasures and antique medical equipment. Here is a look at items that could be considered anything from abominations to toys and collectibles. 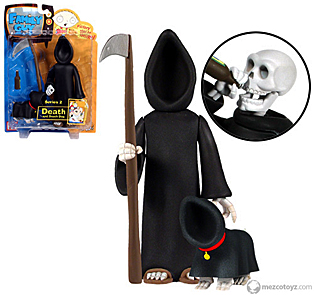 If you said death and toys to me in a conversation, two things would immediately spring to mind. One would be an action figure of a character from a comic book by Neil Gaiman. The other would be a Grim Reaper-like blob of plastic named Charon, who piloted the boat in a little-known movie about mythology called Clash of the Titans.

There’s a third figure: Lady Death, a character from the Evil Ernie comic, first published by Eternity Comics and later Chaos! Comics. Then, other than some model kits, nothing else comes to mind that might have been fashioned in the image of the Grim Reaper. Sure, there are plenty of devils, zombies and cenobites, but I want to stick to the main entity himself.

Off the bat, I found Death and Death Dog from the Family Guy series of action figures. They both come dressed in typical hooded black robes and sandals. Death has his signature scythe, as well as an unhooded skull head for slamming back his beer accessory.

Now let’s move on to the truly weird. I came across a 18th/19th century doll on PinkTentacle.com. The figure was used in Japanese carnivals, known as misemono, for educating people on the birth process. I have to say that for a doll built in that time period, it is very detailed and realistic. The stomach is removable to show the fetus in various stages of development, complete with umbilical cord and afterbirth. Sure, this isn’t inspired by death, but it is pretty weird and I thought it deserved a place in this article. While searching for more information on this piece, I came across a blog called Sugar Smack that had some truly bizarre toys from the land of the rising sun. There’s roadkill cat, baby in a microwave and an impaled woman figure. 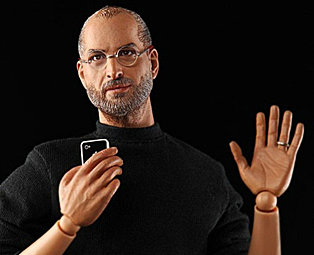 While this next one isn’t a toy, it is pretty horrific. Artist Kittiwat Unarrom creates horror-worthy body parts out of – wait for it – bread. His loafs look incredibly realistic, almost as real-looking as the latex limbs that you might find in a haunted house. This brings new meaning to the line, “You are what you eat.”

When I mentioned the idea of digging up grim and gruesome toys, Unwinnable’s Charles Moran thought I was going to write about toys based on dead celebrities. He brought up some good examples, like Lorne Greene from Battlestar Galactica, Alec Guinness from Star Wars and Farrah Fawcett. So for Chuck, I’m going to finish with a toy based on a dead celebrity: the Steve Jobs action figure. Hong Kong-based Dragon in Dreams created an authentic likeness of Jobs, complete with his trademark turtleneck. The figure comes packaged with an assortment of iDevices, as well as an apple. Well, it did until Apple shut them down on this project. Apple claims they own the license to Jobs’ likeness and obviously any likenesses to Apple products. Within the last two weeks, Apple stepped in and ordered a cease-and-desist on DID’s project.

Ken has many more oddities up his sleeve. Find out on Twitter @UnWinToyHunter.